You’re reading a website about old bikes, so presumably you like old bikes. But do you ride one? Frank Westworth is dazed and confused…

‘All Velocette dealers are rubbish! Know what I mean?’ An angry man was being angry at me. I am a kindly soul and gazed at him in wonder. Life on a magazine stall at classic bike shows is rarely dull. Sometimes it is dull, but those times are in a minority. Sometimes I crave dullness.

‘I mean!’ Angry man was getting into his stride here. ‘They are criminals. Take the clutch set up. Take it. It is simple. No-one knows how to do it. The spares that these criminals sell are all just junk. Take the clutch…’

Although I am of course a chap of infinite patience and calm charm I felt that I should point out, quietly and gently, that I have never owned a Velocette with less than two cylinders, and I have never adjusted the clutch on one, although I am certain, absolutely certain, that it is an activity which is fulfilling beyond dreams and that my life would be complete were I to master it.

Angry man shrugged off my feeble protestations, ignored my obvious ignorance. ‘Everything written in magazines like yours is rubbish. There’s not a fact in them. Not one. Know what I mean?’ I agreed with him. It seemed only sensible. I prayed that a passing VAT inspector would mistake me for an errant banker who owed his office millions and would arrest me on the spot. No such luck. Readers waved amusingly from a safe distance. An audience gathered, catching my eye and winking at me. Angry man marched around to my side of the counter so he could froth at me with enhanced precision.

‘My Velocette is absolutely reliable. Absolutely reliable! Know what I mean?’ I had no idea, but knowledge comes to him who waits. I waited. Maybe an unresponsive silence would calm him down. It didn’t.

‘And do you know why? Do you? Do you know why?’ Apart from his fixation with the criminal activities of Velocette specialists, he looked quite normal. But I couldn’t resist. I didn’t know why his Velocette was absolutely reliable, but I could guess.

‘Because you ride a Honda, I bet.’

Bravery is second nature to magazine men. And women. Angry man stared at me with disgust in his eyes. ‘Probably a Deauville,’ I ventured, warming to my theme. ‘Lots of Velocette riders like the Deauville. You can see why.’ In for a penny. He was a glowering dark red by now. Maybe he would suffer an embolism. Maybe members of the Velocette OC would rush to his aid; I could in fact see one of them in the small crowd. He appeared to be choking with laughter. Maybe he was carrying a concealed elephant gun and tranquiliser darts?

‘Are you on your Honda today?’ There is a time to be bold.

‘I have ridden here today,’ he paused, drew breath, poised to deliver a killer blow; ‘on my Moto Guzzi!’ He was incapable of speaking without exclamation marks. A lifetime of musical abuse has ensured that I suffer from a little deafness, selective deafness, so I am mostly immune to exclamation marks. 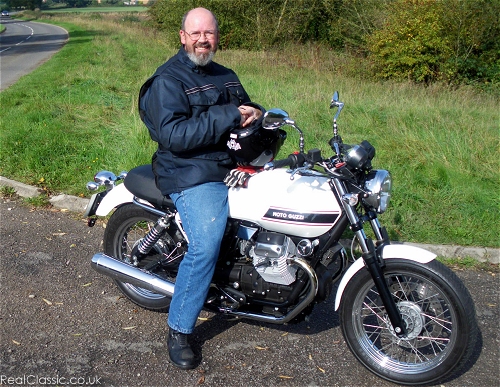 ‘Oh. Good choice,’ I beamed like a kindly Santa. ‘Guzzis are great bikes.’

The Better Third marched up and interrupted, sternly. ‘You,’ she spoke with steel in her voice, ‘need to talk to Alan.’ She pointed at an anonymous face in the audience. ‘He’s been waiting for ages and wants to know about Nortons. You do know about Nortons, Frank.’ Of course I do. I beamed at the angry man, thanked him, which must have confused him as much as it did me, and shot off to confront a complete stranger, who was not only not called Alan but who also had no interest at all in Nortons. ‘Tell me you know nothing about Velocettes,’ I begged. He agreed that he didn’t… 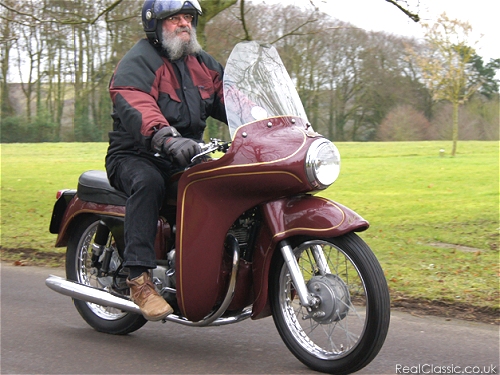 ‘But while you’re here,’ his eyes glinted dangerously, ‘I want to know whether what you wrote about the Royal Enfield Constellation was true. The one with the Airflow fairing.’ I wondered what he meant by ‘true’.

‘Did you really like it as much as you said you did, that’s all?’ Of course I did. I explained that had there been room in both The Shed and the wallet I would in fact have bought it. ‘I tried to buy it after reading your story,’ came the reply, ‘but someone else got there first. I wish you could have said that it was sold when you wrote the story.’ I explained carefully that when I wrote the story the bike was for sale; the buyer had also read the story and, enthused beyond reason, had bought the bike. The nice man, not-Alan, beamed. All was clear.

As was our stand. Angry man had vanished.

This is the time of year when we are all supposed to make a resolution, when we gaze back at the old year and prepare to better ourselves in the next. Apparently. If you are a show-goer and cannot think of a better resolution, could I ask that if you see me at a show and want to talk bikes, please resolve to be happy and cheerful and share your own personal sunshine with me. And I will do the same for you.

2013 should be a great riding year, a happy year, a year of clear, winding roads and endless blue skies. Let’s make it so.