I have a friend called Simon. Simon is a nice guy in his early forties and has been around bikes, like many of us, for most of his adult life. Simon is, however, mostly a BWW rider (Bikes With Warranties) and as such is rarely seen riding anything, well, old. True, he’s had a quick blast on one or two of my bikes, but they’ve been big multis with electric starts; he’s never really experienced a real classic bike. Until today.

We arranged to go for a ride on what turned out to be the hottest Sunday of the year so far. While other RC’ers attended the Festival of 1000 of Jerry’s bikes, we attacked the mean streets of Surrey.

He arrived at my house on his plastic whizz- rocket and I greeted him with the keys to the first of today’s bikes, a 1977 Suzuki GT500 two stroke; my thinking was that a Japanese classic is closer in style to the modern experience than anything else, gear change on the left, reasonable performance, instruments that work, etc. Also, being a stinkwheel, I thought it might be somewhat different to his four stroke multi. I planned to accompany him on my Morini and then swap later that day. We were joined by another friend on his immaculate Norton Dominator 99.

Before the off we joked about which would break first, the Jap, Italian or British bike, words that would come back to haunt us, especially considering the Italian spaghetti electrics jokes that were bandied around.

I would imagine that the majority of readers will already have experience of classic bikes and it was interesting to see that the sort of thing we’d take as normal seemed alien to Simon; “where’s the starter button?” was only uttered in half jest, methinks. I told him how to prime the cylinders with the ignition off and then to give it a sharp prod with ignition on, but it was all a bit awkward and I eventually started it for him. We wobbled off down the road only for it to die at the first set of lights; he’d left the choke on, of course. Modern riders do nothing except press the button and go, I sometimes forget that. Eventually we got going and progressed out of London, heading towards Newlands Corner, a classic Surrey biker spot.

There were further panics about the headlight ‘not being on all the time’ and that the engine was ‘making funny noises, like metal scraping together’ and then….he stopped. I whizzed back and asked what was wrong ‘It’s conked out, broken’.

‘Petrol?’ I asked. Apparently there was ‘lots’ left in the tank, so, after turning it onto the reserve setting we carried on as normal. 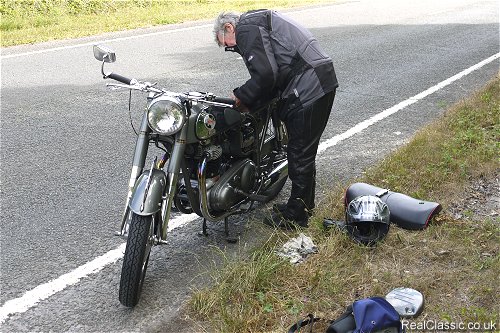 As we approached our destination the Dommie began to slow and eventually stop. It had lost all power, with a full short on the main circuit. Despite dismantling just about the entire wiring system the fault couldn’t be isolated so it was the RAC van for poor Bill. One-Nil to the foreigners. 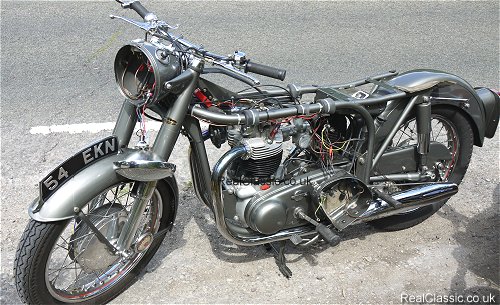 Whilst waiting for the van I asked Simon for his thoughts on the Suzuki. It quickly became apparent that he wasn’t really having a great time on it, his focus was almost entirely on the problems with older machines, real or imaginary- It might break down, seize, the brakes are rubbish, the handling is terrible etc. So, to help him clear his mind of such negativity I gave him the Moreini to ride, a Strada fitted with a tuned 507cc motor. This bike, stripped of any unnecessary fripperies , offers a pure, if uncompromising, experience.

I told him how to start it, but let him attempt it and warned him of the grabby clutch and the need to find neutral before you stop if possible and that there were no warning lamps or indicators, then off we went. Blasted off into the distance like Chuck Yeager more like. By the time we reached Newlands, all of two miles later, he offered to buy the Moreini there and then. “It’s brilliant, fantastic, I really feel in touch with the bike, the sound, everything” and so on. And on and on, for the rest of the day with no less enthusiasm. Even the grabby clutch and the occasional traffic light phut, requiring a re-kick didn’t deter him. In the car park there was a large group of riders soaking up the sun as well as the atmosphere and he quickly joined in with the usual banter and actually showed an interest in some of the other classics there.

At the end of our sojourn I asked him what he thought. “The Suzuki was OK, but it was just like a normal (he meant modern) bike but with lousy brakes, dodgy handling and it didn’t idle properly. Also, the rev counter needs fixing, the needle was a bit wobbly”. The fact it was a 34 year old rev counter seemed irrelevant to him.

“The Morini was fantastic. It felt really quick, even though we were only doing about 70 most of the time. I loved the directness and the feel of it, on my Suzuki 750 although it’s fast you feel remote from the bike. In order to get anything like the same sensation I’d need to be breaking the speed limit by a factor of 2. That’s unnecessary on the Morini; will you please sell it to me?” 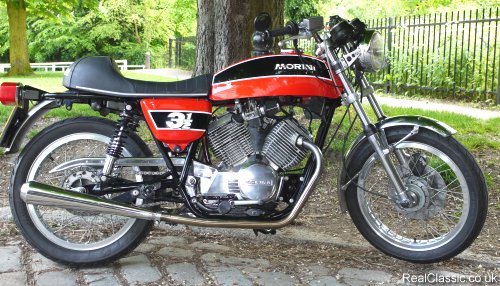 He’s now gone home to look at Morinis on E Bay and I’ve just had a call from Bill; the Notrun remains dead.

So, what have I learnt? I’d assumed that a novice classic rider would appreciate a bike that isn’t too far removed from the modern machine. I thought that left side gear-change in the normal pattern, an easy to operate clutch and reliable switchgear, as well as the facility to select neutral at a standstill, would be appropriate.

I was completely wrong . What he wanted was an experience very different from anything he’d tried before, but it was essential that the machine be capable of keeping up with modern traffic. He was very unsympathetic to the fact that they were old bikes, lots of aggression and stamping on the pedals, the throttles were well wrenched, too!

If I’d gone back any further and given him, say, a 350 BSA, would he have found it too slow and boring? If he had tried the Scott, would it have put him off forever- even experienced classicists sometimes ask for a strong drink after riding Shipley’s finest.

He is, of course, convinced that all British bikes are unreliable rubbish, an opinion based solely on the dead Dommie experience (I offered Bill the princely sum of £101 for the non-running wreck, I’m awaiting his response).

Novices need it to be different, but not too different, it seems. A most interesting day and we have another convert!

So what would you give a classic-newbie to ride, and why?