“These large corporate companies won’t force their vision of motorcycles for the masses on me”. Anarchy goes to test ride a new Honda….

On any Sunday, well actually this last one, I rode over to my local Honda emporium to do the deed. To test ride a new Honda.

It was sunny and bright but bitterly cold, however, the BMW life support system was turned up to max, only just about keeping the cold at bay on my pinkies.

Digressing a bit – sorry I have a habit of doing this – as I know there seems to be ‘an issue ‘ with using a GPS in these ‘ere circles. Many seem to like the romance of wrestling with paper maps and printouts taped to their tank or even following the stars. I used my cheap smart-phone and Google maps to find the way there. I was very impressed, not with the usual Tom Tom type directions, but when I pulled up outside the Honda dealership I noticed the cell phone was showing a photo of the shop – snatched from the internet I guess – just in case I was too stoopid (sic) to recognise the massive car and bike dealership in front of me! Stunning stuff and very clever. Thank you Google. Sure beats shouting at pedestrians to ask the way and frightening old ladies.

The showroom is one of those franchise car/motorcycle dealerships, full of old duffers in grey shoes holding brochures for Honda Jazz cars, with their wives in tow to choose the colour and ready to bite their ear off if they showed the merest interest in Honda’s fake Harley propped up in the window.

The motorcycle section is on the right hand side of the car showroom and is simply a line of bikes in the corner. So tight are they lined up that you can’t even see them properly. I guess this is to ‘maximise product placement space’ and keep the riff raff from climbing on them.

It’s all very beige and boring. Where are the inspirational marketing tools? You know, posters of Casey Stoner – World MotoGP champion on a works Honda – or anything that inspires the customer to think it is cool to buy a Honda and crack open their wallet. All neutral coloured walls and office desks.

This is not right, I think. Motorcycle shops are supposed to be places that capture our imagination and our lust for a new bike, aren’t they?

Back to the present, and centrally heated snug in my New Town Honda dealership I get ‘Simon’. A nice but dim youngster who looks like he’s propping up the bike desk today but usually works in the car section. After introductions I point to a red bike outside and asked if that’s the demo bike for me. He says “yep” with a wide sincere grin so I mooch outside to take a gander at the new toy.

What can I say. It’s so dull I can’t be bothered to take the lens cap off my camera. Nothing about it appeals to me. I look at every angle, walk around it several times, step way back, step up close, nope. Nothing here to see, move along please.

This bothers me. I’m not usually this apathetic to two wheeled vehicles. I can’t see anything that actually looks very ugly. Everything seems to be there and it’s all brand new. I notic the side panel stickers are peeling off, one side missing altogether, and the finish is very budget. It’s a cheap bike at £5,850 with ABS as standard, yes truly it is at today’s prices, but you can see where corners have been cut. 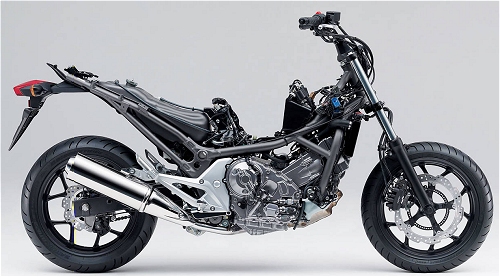 The NC700x is one of the variants of Honda’s new modular bike concept. A motor and basic frame that is used in both a scooter and a road motorcycle version. This is the ‘semi adventure’ model noted by the X in the name. As far as I can see it has a plastic beak like a GS BMW and slightly longer legs than it’s road only version. An adventure bike it is not.

I don’t like the frame. It’s a tubular steel affair that looks a bit like old crash bars on each side. I understand this frame design is to turn the generic scooter into a conventional motorcycle, but one major point that seems to have slipped the designers pocket book is that the frame is so exposed that if it was dropped on its side the frame outer rails would easily be damaged and an instant insurance write off! Usually the engine side covers take a clout on most bikes and spare the frame (along with the tank and bars and fairing etc). For a bike with faint aspirations for adventure style touring, it seems an Achilles heel. Stay off the fire roads and don’t park where it could get knocked off its flimsy side stand, I guess.

It then of course dawns on me. It’s a scooter!

That’s why I can’t get excited about it. A sheep in wolves clothing. It’s dull but I understand why.

It’s not for motorcyclists, it’s for people that would usually buy a large scooter and just want daily transport. I don’t have a problem with that. They are not looking for passion or integrity, a lifestyle or adventure from their ride, just value for money and a Honda badge, hoping for reliability. The glossy brochure boasts that the engine in the bike is half a Honda Jazz car engine. So, is this is a half-pint Honda Jazz then? Half an engine, half the amount of wheels, half the fun of an economy city car perhaps?

It has this huge storage box where the petrol tank on a real motorcycle should be. This is to put your crash helmet in, they say (if it fits, as I understand that it’s a tight squeeze for some full face helmets). Not a new idea as Honda claim; the comical Dan Dare BMW 650CS had the same to house a handbag in 10 years ago. I’m always gob-smacked at why the storage of clothing should be so important. There isn’t a huge hump on its backside to fit your jacket in, or bulges each side, hamster like, to place your boots in; so unless you ride naked or in normal clothes it isn’t going to offer you that much more than a standard helmet lock.

‘Simon’ asks me about going for the test ride. I actually decline, a first for me, and say it’s not my thing and thank him for his time anyway.

Yes I was surprised too. I could now be telling you that perhaps it had an average ride, a quiet engine with average brakes and not a lot of engine revs. No power-band, just steady torque that is fine for most urban commuting.

Instead I thumb the starter on my own bike, set the heated grips to max again and take the long way home to enjoy the sunshine and dry roads.

I don’t care how many miles to the gallon the Honda NC700X thinks it can do, or whether it has ABS, HISS or digital doo-dahs. These large corporate companies won’t force their vision of motorcycles for the masses on me. Some high profile internet reviews claim this is the most significant bike released this year and those noted experts evangelise over the concept, claiming others just don’t get it.

Well, if this is the cost effective future for mid size motorcycling then it isn’t wearing a leather jacket.

I realise I’m simply not ready for grey shoes.