One of the year’s major autojumbles takes place this coming weekend at Netley Marsh near Southampton. As well as the usual spares for sale, this year’s jumble also features an auction of classic motorcycles…

The Carole Nash Eurojumble opens 9am on Friday and Saturday 4th and 5th September 2015. If you want to avoid the crowds and take advantage of a lower entrance fee then the Saturday is typically less hectic, and it costs a couple of quid less to get in. But the majority of the rare-part bargaining takes place on the Friday – and many of the specialists and traders come over from the Continent just for this weekend. Typically, stalls at Eurojumble don’t just sell new repro consumables, but tend to offer genuine old spares as well as some intriguing barn-find machines which have just been dragged out of a French shed and transported across the Channel. If you leave it until lunchtime on Saturday then there’s a chance that you’ll miss the action…

This time around there’s also an extra attraction on the Friday, in the form of an auction hosted by Charterhouse. Lots range from spares and memorabilia to mopeds, classic Japanese machines and old British bikes, and onwards to those top-flight vintage bikes which are expected to fetch big, big money. However, there’s plenty in the catalogue to attract a canny eye, like the collection of Royal Enfield sales brochures which include marque literature from 1925 to 1970. There’s a separate lots of Enfield ephemera, containing blue-prints, technical and prototype drawings, technical notes, posters, handbooks, photo and more – ideal if you’re a true marque enthusiast.

Then there’s the bikes for sale. We like the look of the 1937 Ariel Red Hunter which was purchased by the vendor in 1980 as a restoration project, and returned to the road, fully rebuilt, a year later. It was then only used for three years before being laid up. After 30 years in dry storage it will need an overhaul (at the very least oil, petrol and air in the tyres), but has a sensible estimate of £3000 to £5000. 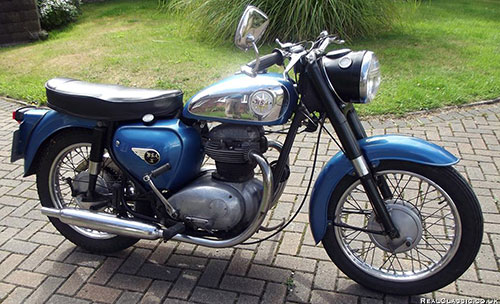 Then there’s a unit-construction 1964 BSA Royal Star is another older restoration which would now benefit from a little TLC. The A50 was originally exported to North America and repatriated in 1991. Restored in the late 1990s, the 500 twin has since travelled around 3000 miles and is currently ‘running well’. Comes with a stack of paperwork and some spares, and is expected to fetch around £2300. 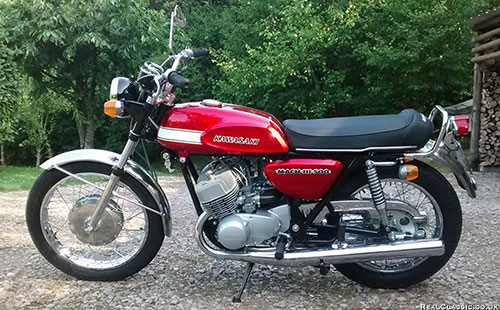 If your tastes turn to something more modern, more rapid and rather more red, then this 1970 Kwacker H1 carries an estimate of £7000 to £8000. The seller has owned it for over a decade, during which time it’s enjoyed considerable mechanical and cosmetic attention including an engine overhaul with re-lined barrels; the heads and crankcases have been vapour-blasted; the frame and all other black parts have been powdercoated; the paintwork is all-new; the fork stanchions and other brightwork has been re-chromed; the clocks reconditioned, and the exhaust and rear shocks have been replaced. Just add rider and stand well back… 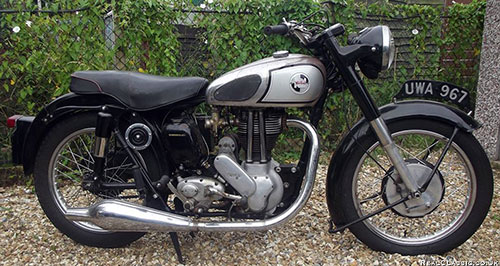 For a more sedate side of life, this 1955 Norton ES2 looks to be just the ticket. The current owner bought it as a project back in the 1980s when it came in big bits and several boxes. It’s been used on and off since returning to the road, clocking up a thousand miles since 1998. Once again, the new owner should expect to do some general fettling, but if it sells for its estimate of between £2000 and £3000 then there should be space in the budget for a few mod cons. Just be clear, here: it’s not a featherbed so don’t expect it to rattle around corners like a rocket nor to sell for mega-bucks if given a quick sprinkling of bling.

The sale catalogue includes another hundred or so lots – if you can’t make it to the actual event then you can always . But it’s probably more sensible to head down to Southampton where you can inspect the bikes before the sale; turn the engine over, look for split tanks and the like, and catch up with the last-minute auction entries.

If you’re not so bothered about the auction, then Saturday at Eurojumble features a ‘garage clearout’ section where members of the public can turn up and sell spares. Both days include a selection of exhibits from motorcycle clubs and on-site refreshment stalls. Just remember to bring your waterproofs: there are a couple of marquees but they get awful crowded if the weather is inclement.

Where: Netley Marsh, near Southampton, Hampshire, SO40 7GY