Ken Phelp is so keen on this unusual breed of vintage motorcycle that he wrote a book about them. So how did his fascination develop?

The Ner-a-Car is a truly unusual motorcycle, built in the 1920s. It was an American design dating from 1918 or so which was produced under licence in England. The model designation is a pun on the designer’s name – Carl Neracher – which also reflects the vehicle’s car-like layout. The Ner-a-Car had a monocoque frame and a sat-back riding position with a huge front mudguard and generous footboards. It was easy to clamber on to, simple to operate, and it provided a ‘cleaner’ experience than the mainstream motorcycles of the day. Although the American audience quickly decided they wanted real cars, the Ner-a-Car found a real following in the UK.

The first bikes were fitted with 211cc two-stroke engines, then a 285cc engine arrived in 1923. Two years later, a sidevalve 348cc motor was used to drive a three-speed gearbox, and then in 1926 an overhead valve version was made available. However, by 1927 the UK distributor had run onto financial rocks, and the last of around 6500 British-built Ner-a-Cars left the factory. Some 85 years later, the breed still has its attractions…

Back in the mid 1990s a friend of mine was given a wreck of a Ner-a-Car in exchange for selling off all of his deceased friend’s classic bike stuff. I thought it was only fit for the skip, but later Terry showed me some of the bits he’d made from cardboard patterns, and I was impressed. Then he said ‘Find what the chassis number is, and you can be the rider!’ Took me a nano-second to agree. Up to that point I had no real interest in vintage bikes, but had been riding for 40 years, mostly off-road bikes.

So started my research. I discovered some amazing coincidences and ended up finding that chassis number. But the research also led to some interesting stuff that had never been written about! And that led to my book. 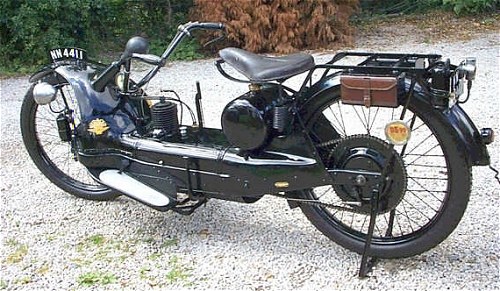 However, this is more about the bikes. Terry carried on restoring it, and did a GREAT job! Those of you who have seen NN4411 will know what I mean! I entered the 1998 Banbury Run with it, but on the Thursday it still wasn’t running… We did two short test rides, one Friday, and one on Saturday, and then set off for the Banbury. The ride was GREAT! I was able to ride it hands-off after about a mile, and I was completely hooked.

Later I took it over to North Leicester Motorcycles, as Stuart Mayhew wanted to see it. He was hooked as well! We had been told about a Model C in Scotland, so Stuart bought it, and his son Alex and I restored it in the workshops. Next, a rare US model was available, and Stuart bought THAT one as well! We also restored that one. It was originally sold in Paris and later Stuart rode it around Montlhery at the Coupe des Legendes. 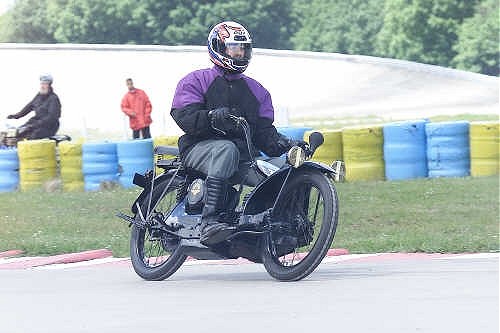 In late 2000 I had the idea of getting as many Ner-a-Cars as possible at the 2001 Banbury Run to celebrate their 80th year. By this time I had contacted the inventor Carl Neracher’s grandson, Carl Morris, and he was coming over for Wimbledon. When he heard of the plan, he came a week early, and flagged all eleven Ner-a-Cars off at the start, as you can see in the photo. 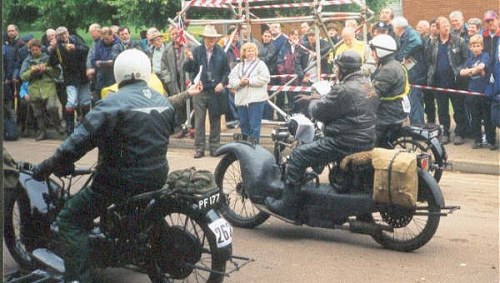 Terry’s bike wasn’t available, so I didn’t have a bike to ride. However, Kelham Island Industrial Museum in Sheffield loaned me their bike, so I got a ride after all! The bike hadn’t been ridden for a number of years, so I got it home and worked on it to get it through the MoT, then we taxed it. WB7160 is that bike, and when I got to the Banbury Start, a chap came up and said ‘Who’s riding this bike?’ Obviously, I said I was, and then he pulled out a large photo taken in the early 1960s of himself with the bike, and the original owner! I had a good ride except for a fuel blockage.

All the riders had a good ride in that Banbury Run, except for one that had a sidecar on – the magneto gave trouble on that one. Stuart Mayhew and his son Alex both won Trophies as well as Finishers Awards on the US model and FG716. So 2001 was a good day for Ner-a-Cars – we had ELEVEN there altogether.

Later, Roland Brown tested both Stuart’s bikes, and his article appeared in magazines, both abroard and in the UK.

Those bikes are in the Neracar Museum in Syracuse, NY. Before they went, we had a few rides out on them. I still had WB7160 on loan, and we rode all three to the 2001 VMCC Founders Day Rally at Stanford Hall, where, as usual, there was a lot of interest. Apart from the Banbury Run that’s the longest run we had – some 40 miles or so each way.

By this time I was really hooked on the ride that they give, as well as the interesting historical research. OK, these machine are not fast, but they DO give a surprising ride. When you wheel them around they feel unrideable as they’re so rubbery, yet that disappears as soon as you get your feet on the footboards.

I had NN4411 in my garage for a couple of years, and it had a couple of special outings. In 2002 the Brooklands section of the VMCC invited anybody with an unusual bike to bring it down for the September Brooklands Relived event, so I asked, and they invited me down. I had a go at the Test Hill, which was open to all riders, but with a flying start rather than a standing start from the bottom. I got about a third of the way up before it cried ‘enough’! But I DID get a photo of myself riding it along the banking under the Members Bridge… 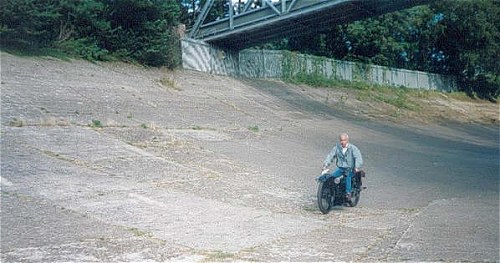 Another outing was to the 2003 Beaulieu Motorcycle World show with the Feet Forward stand, alongside more modern hub-centre-steered two-wheelers. I had a go around the track with them – quite amusing, and I was later sent a nice photo of me ‘cornering at speed’ – well, about 7mph actually. I think it looks good, even if YOU don’t! 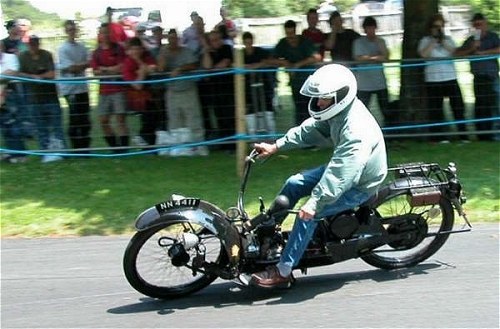 Then in late 2003 I heard about a Ner-a-Car in the Morgan shop, FH Douglas, now run by Mike Coram. It had been standing in the showroom since 1965! It turned out to be just the model that I wanted. I made an offer but Mike said he didn’t want to sell. Then about a fortnight later my wife took a call while I was doing a job in NLM’s workshops, and he said he WOULD sell! I went down with my trailer the very next day before he changed his mind.

We wheeled it onto my trailer, and while I tied it down he put a large cardboard box in my boot with some bits that weren’t fitted to it. I stopped at the first M-way service area for a drink, and while I was doing that I rummaged through the box. In it was a complete spare engine, and transmission, and some covers that I thought were missing, along with the correct mudguard stays, etc. I was over the moon! Especially so when I found the chassis number plate complete with fixing screws in a tobacco tin! 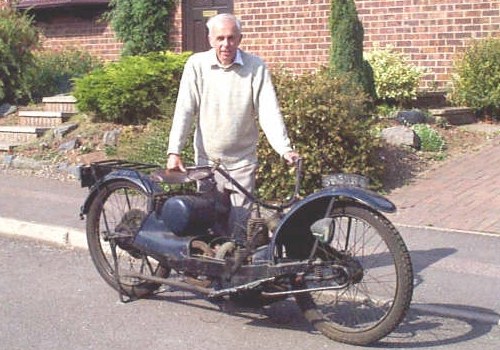 It was soon running successfully, so I had a short ride around our cul-de-sac. Then it was put in for a VMCC examination to retain the original registration number, all completed satisfactorily. This was all completed in time for me to enter the 2004 Banbury Run.

Meanwhile, Stuart Mayhew’s younger son Chris, a real speed merchant (he did the Nick Sanders 2003 Moto Challenge around the country with Maria Costello, the lady racer, and rode a really quick Bimota loaned by the factory), wanted to emulate his dad and brother by riding a Ner-a-Car in the Banbury, so we entered the timed section together. I wasn’t too keen on that, as it meant tackling Sunrising Hill, a bit daunting with a high-geared friction-drive 2.5hp 2-stroke! He was to ride Terry’s bike, NN4411, which is just a bit newer than mine. 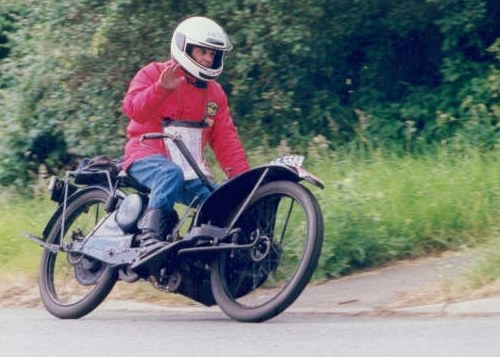 Anyhow, we had a GREAT ride! The weather was good for us, but some riders had really sharp showers, and got soaked! Chris struggled on Sunrising but I had geared my bike down a tooth, and ALMOST made it – just had a quick run alongside for the last 30 feet or so.

Back at the start we learned that we had won Gold Awards, so mission accomplished. THEN we learned that Chris had won a Trophy as well, so Stuart and both his sons have ridden three different Ner-a-cars in the Banbury Run, and all three won Trophies! Don’t think that has been done before, and certainly not on Ner-a-Cars!

So that’s a brief resume of what I’ve done on Ner-a-Cars, There have been several other events, such as the Stinkwheel, the Day Of Champions/Riders for Health Charity day at Donington for the past four years with three different models, and the Post-TT at Mallory. The bikes always get a lot of attention, as many have never heard of them, and others have heard but only seen them in Museums, whereas ours are ridden.

All in all, my motorcycling has taken on a different perspective, one that didn’t expect, especially doing so much off-road riding, especially since the late 1970s until the early 1990s. I still like having a blast on my Dart, though, and when I rode a DB4ie Bimota, well that was something else…

But I’m still a Ner-a-Car anorak. If you want to know a little more about these machines, have a look at my website:- http://mysite.wanadoo-members.co.uk/neracar