There’s a special RealClassic Ride-In to the NMM at Birmingham this week. For all those who can’t come along in person, here’s a quick round-up of what’s been going on at the Museum in recent weeks…

The NMM’s first raffle of 2015 was drawn at the Stafford Show, where SimonH in Suffolk won a brand new Norton Commando 961. The second prize of a BSA C12 went to a chap called Ken. Tickets for the next raffle are now in circulation (RC magazine subscribers should find tickets and an envelope for the next raffle in with their June magazine).

This time around, first prize is a handsome 1947 Vincent Rapide which has been upgraded to Shadow-spec in the NMM’s workshops. Second prize is a D7 Bantam, with a third prize of a luxury weekend away for two people. The draw will take place on Saturday 31st October 2015 at the Museum Live open day, and tickets cost £2 each. If you didn’t receive any, they’re available from 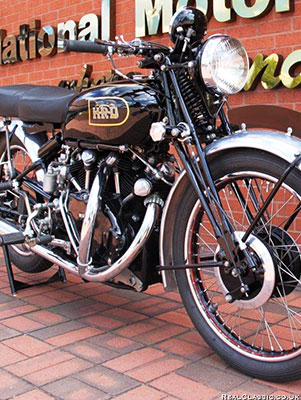 Ripe for Restoration, on Now…

The NMM runs its own ‘Friends’ organisation which gives exclusive access to some unique activities tailored especially to British bike enthusiasts. The first NMM-Friends workshop training day was held in May, when the Museum’s restoration team gave a series of talks based around hints and tips on restoring a Museum bike. 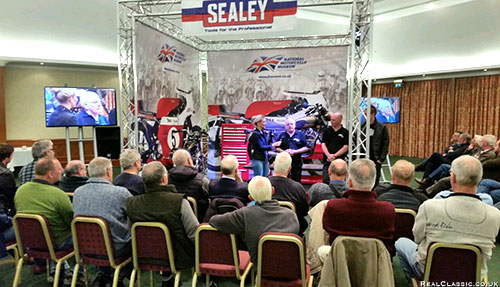 The day offered the chance for the 40 attendees to learn some tricks of the trade, and inevitably included entertaining and informative anecdotes from the highly experienced workshop team. More workshop training days on various maintenance topics will be added to the Friends’ schedule later this year.

A series of classic track days this summer form another part of the NMM-Friends programme. This gives Friends access to special track sessions at some of the UK’s most iconic circuits. In July, over the weekend of 11/12, you could take to the track at Cadwell Park. Or in October, the NMM Friends will be at Snetterton for an extra-special event on the 16th, 17th and 18th. This will incorporate the chance to try a vintage bike and enjoy the ‘Endurance Legends’ festival, with the Museum running two ex-works Norton rotary racers with star riders in the saddle.

You can book for one day or the full weekend at either circuit, with a minimum of five riding sessions each day, and take advantage of free advice from an ACU track instructor. Sessions are split into 20 minutes by riding experience or by type of bike (two-stroke, British, European or superbike) to ensure that groups ride at roughly the same speeds and everyone can relax and enjoy their time on track. There’s a 105dBA noise limit and you’ll need proper riding gear. There’s a mechanic at each circuit, and camping is included in the cost, which starts at £109. 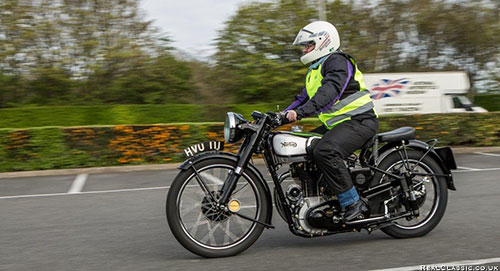 Some of the most exciting and valuable classic motorcycles in the NMM collection came out of the Museum and onto the road in April. The five riders received an induction and training session before being escorted by ex-police motorcyclists around the beautiful Warwickshire countryside. The bikes included a Brough Superior SS100, Vincent Black Shadow and a BSA Rocket Gold Star, with each type of machine commanding its own fee with insurance cover and lunch in the Museum restaurant thrown in. The plan is to offer between four and six of these riding days to NMM Friends every year.

You need to be an NMM Friend to take advantage of these arrangements, and places on these exclusive days are strictly limited and tend to fill up fast.