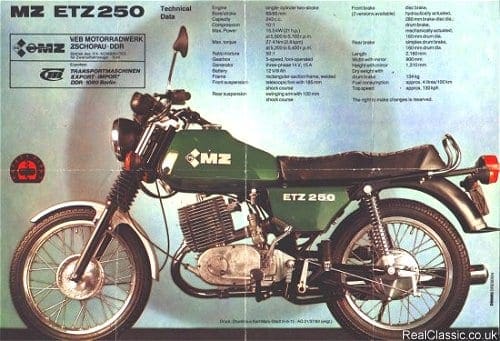 Derek Pickard looks at the stock MZ250 carb situation, tries the alternatives, finds what works and gives the details of how to make your ETZ run super sweet…

Let’s start with a few hard facts: The BVF carb as fitted to the MZ two-strokes can only be considered ‘average’ in its metallurgy and machining. It is the main contributor to bad starting and rough running. As the carb wears, that bad behaviour gets worse. This can be corrected by replacement. The trick is to know which carb and how to make it fit and work.

We all like the unique MZ 250. The bike works well as a good basic rider but it does mean accepting a few compromises. As the years pass and various engine bits are replaced, few owners go to the expense of fitting a new carb. Yet the BVF inevitably wear and with it goes any accuracy of settings which means missing out on easy starting, best pick-up, smooth over-run and maximum economy.

My ETZ250 had done over 70,000 km and like all 25 year old bikes has had major engine and transmission parts replaced. But the original East German BVF was simply a worn old carb. Rather than putting money into renewing it, I decided I’d take on a project of finding which alternative did what; albeit from a position of considerable carb tuning experience over the years, including Amal and Mikuni.

The most obvious replacement is to find a good Bing and mounting stub from a later model MZ 251. But those carbs have probably covered a high mileage and are worn which means they are unlikely to be a good upgrade. 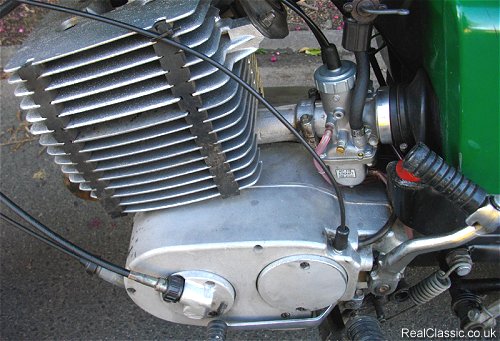 See something different? This is what a Mikuni VM30 looks like on an ETZ250. Not much change visually but the performance is a big upgrade.

Just about everybody these days knows that the carbs which hardly ever wear are the top-rated Mikunis. These Japanese carbs have the best materials and machining which is why they go on for decades with a fantastic slide/body fit to match their top design. Even old ones show up as being in great condition — whereas at the other end of the carb rating scale, old Amals are usually best left for keeping fishing lines tight! Here’s the results of my investigation:-

For the MZ250, 30mm is the correct size but it is nearly unobtainable from breakers since very few old Jap bikes used that size. So for the bargain hunter, the choice is to go the next size down and use a VM28 as fitted to older Jap bikes such as the 1970s Yamaha RD350 and trail 250s. The problem is they are a smaller bodied carb so special sleeves will have to be made for the front and rear to fit into an MZ. These convert the VM28 to exactly the right length and diameters – but be careful to make the front one an exact fit or an air leak could result. (Don’t worry too much about the 2mm drop in venturi size as such a reduction may well lose a couple of bhp at the top end but there shouldn’t be much difference in the effective torque around town. And don’t fit a VM32 onto a 30mm inlet as that will work worse than a VM28.)

My ETZ 250 runs well on such a VM28 conversion which was my first carb upgrade and I was delighted at the improvements. If you have access to someone who can make alloy sleeves then this conversion would make a very cost-effective improvement for a commuter or tourer.

This British carb may well have been part of the Empire but it is rather crude and famous for not giving a reliable tickover. Fitting a chrome plated brass slide from Surrey Cycles usually gives a tickover but there’s also the additional expense of buying the necessary front fitting that converts it from a flange to a push-on spigot mount. Beware buying old Amal Mk1s as most were made with a pressed-in size 25 pilot which can’t be removed.

While I accept the Mk1 has the advantage of offering a simple tickler flooding device for cold starting and can be very cheap to buy a used one, all-in-all I’m not a fan of this carb. The Mk1 metallurgy and machining is worse than the BVF and it cannot be an improvement on a 250 Zed; so I didn’t test one on my ETZ.

Since Burlen (the UK maker of the Amal Carb Company) has reduced the new price of this carb it is worth considering, and for a little more money the Teflon-coated slide can be bought. Fitting means making a very thin (14 thou wall thickness) sleeve for the front so it accurately fits into the MZ female fitting by being just under 40mm. Also, it involves turning down the large rear inlet trumpet from 60 to 52mm which may look ugly by exposing a couple of holes but these are covered again by the MZ air filter sleeve rubber. And remember when ordering to request a ‘left’ one so the side adjustment screws are more easily accessed.

An interesting comparison between this and the stock carb is the incredible difference in weight. MZ must have cast their carbs out of the heftiest alloys with lots of zinc or lead which is illustrated by holding a BVF in one hand and an Amal Mk2 in the other. The immediate comparison is something like between a house brick and an empty box of tissues. Presumably, Amal use plain light aluminium. (Be advised that this Amal needs a two-stroke spray tube where the top is angled forward at 30 degrees. Also, the pilot jet must be fitted in the front of the two positions.)

For fast open road work, the ETZ250 is only a 250 and so needs every last bhp which comes from the full size 30mm carb. A VM30 is the best and this may be the most expensive at £105 from the UK but it has the advantage of being superb at everything in carburetion. It definitely optimises the engine for the best in starting, pick-up and economy. If it is possible to come close to bolting on the precision of fuel injection, then a new Mikuni is it. These VM Mikunis are a very sophisticated instrument and a heck of a lot of variations in needles and jets are available so some may find the tuning difficult and expensive. But I bought mine from Mikuni specialist Allens Performance who supplied it correctly jetted.

However, again, a sleeve needs making as the rear bellmouth can’t be turned down. This means making a difficult stepped spacer for the rear that takes the push-on end from 57 to 52mm OD for the MZ air attachment; I made mine 2mm thick out of aluminium. A difficult thing to make but vital. The fit is tight and a couple of things must be remembered. Firstly it is necessary to carefully take off a thou or so from the Mikuni’s front OD by hand with say 180 emery paper which will allow the stock VM to slide into the MZ mount. This is done for fit as much as the polishing off the as-cast semi-rough finish for an air-tight seal.

Then it is necessary to invert the two MZ carb clamping bolts after thinning down the heads so when in the inverted position these heads clear the front of large VM float chamber that unavoidably locates very close. And because this VM with the rear stepper spacer is longer than the stock carb, heaving it into place is a tight squeeze but it can be done. When compared to all other carbs the VM32 Mikuni is a delight. My ETZ250 is now far more user-friendly usually requiring no more than two kicks to start and runs spot on every time. Definitely a better bike. 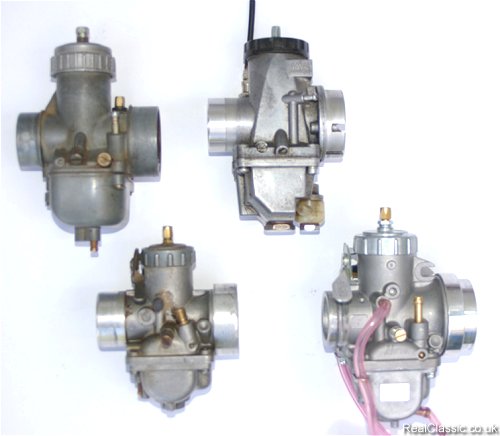 As the stock BVF is inevitably old, worn and best replaced, the 250 Zedder has a few options. Finding an old VM28 (bottom left) can be cheap but front & rear fitting sleeves must be made. An Amal Concentric Mk2 (top right) with a Teflon slide works okay but both a thin front sleeve must be made and the inlet trumpet must be turned down to fit onto the MZ air filter attachment. The VM30 Mikuni (bottom right) is the last word in optimising an engine¹s carburetion but the rear needs a stepper sleeve for the air filter join. Any one of these three carbs will improve the ETZ250 starting and running over an old BVF.

In terms of outright power, just about all 30mm carbs can produce about the same top end if the main jet is right. But not exactly the same because as the Mk2 casting has a lot in common with other Amal sizes, the all-important trumpet effect into the venturi has too many compromising angles and cannot flow air as well as the VM30. But in reality we’re only talking a tiny difference at the very top end. Interestingly, the BVF has a superb air flow shape pity the rest of it is so bad. Yet more proof that the East German engineers knew the correct designs but couldn¹t get the right materials and machining.

While both Mikuni and Amal carbs have chokes that can be operated by lever or cable, the latter is better . The reason is a simple on or off is inadequate in not providing a setting of only partially on for warm-up for a winter morning. It all adds to the user-friendliness of a good system.

It is definitely possible to transform the running of an old MZ two-stroke: fit a new Mikuni for 105 quid and have the new inlet sleeve made. You won’t believe how much better your bike will run.

Curiously, I later converted the 250 to a 300 and found the same jetting worked in both the Mk2 and VM30.