After main bearing failure and repair, Phil Speakman finally arrives at his destination in Finland. Now all he needs is an ice-lolly…

I didn’t know whether to keep on laughing or start crying with relief, as 48 hours of sickening worry had evaporated to the sound of a healthy 2-stroke tickover. My swollen right knee hurt like hell, I couldn’t straighten my back, my hands had picked up a good few cuts including one fair sized lump out of a knuckle and my once-clean clothes were only fit for the rubbish bin.

None of that mattered now, as I hurried to be back on the road again. I stripped down to my underpants, had an all-over wash with orange-scented, beaded hand cleanser and got back into my leathers. I paid Paul for the bearings and gear oil and his other invaluable services. He only asked me for £80, which for his time, skill, use of tools and willingness to drop everything just to help me must be the bargain of the year. I know somebody somewhere with be saying; ‘£80 for a couple of bearings, that’s steep’ but, believe me, if you think that is unreasonable, then you know the cost of everything and the value of nothing.

At 10pm that same evening I rode victorious into the camp site at Ikaalinen and pulled to a halt by the campsite reception, soon to be surrounded by a group of curious MZ Riders who looked at my number plate with curiosity. Harri introduced himself and explained that he had been emailed by a RealClassic member, had been told of my predicament but had no way of getting back in touch with me. Then he handed me a cold beer while I told him of the events that had transpired that day. As he translated to the gathering crowd, the looks I got as the story unfolded and Harri explained to my new friends exactly what I’d done to get there made me feel a hundred feet tall – despite feeling utterly exhausted.

I was SO exhausted that I slept very well that night, despite a wonderful new experience… of which more later.

The following morning dawned clear and bright, perfect for the lunchtime ride out. I considered washing the bike for a few seconds, then decided that the oily fingerprints were badges of honour that it could wear until I returned home. The ride out was, to be honest; painful. I hadn’t made the effort to get the timing right on the Supa 5 and it was run at such a slow pace that I couldn’t happily sit in one gear comfortably. 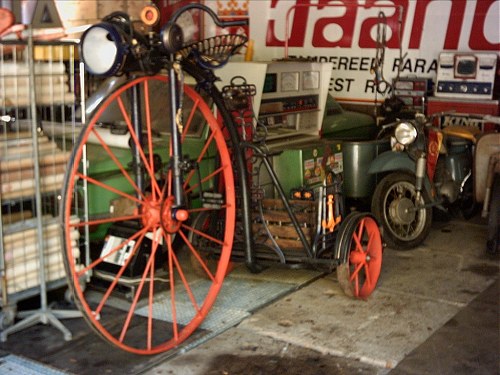 Our eventual destination was the eccentric home of a local member, who had surrounded his considerably sized property and filled its numerous outhouses with a disparate collection of machinery, vehicles and mechanical implements of all sizes, shapes and functional form. Next to a collection of ancient steam engines, sits a sculpture welded from farming implements overlooked by a wall of early pedal cycles, four bikes high. One garage contained amongst its fine collection of automobilia a soviet limousine and a prehistoric cast iron penny farthing style Husqvarna tri-cycle that looked like it would need a decent sized V8 to power it up even the slightest of gradients never mind pedal assistance.

The main attraction however was a spherical cage containing a 1960’s CZ 125cc single. This was a 360-degree sphere of death that spent its life touring Finland and beyond. Similar to a wall of death but with the added twist that once the rider was lapping the circumference horizontally, the cage was turned through 90-degrees so that the rider was lapping vertically north to south as opposed to east to west. 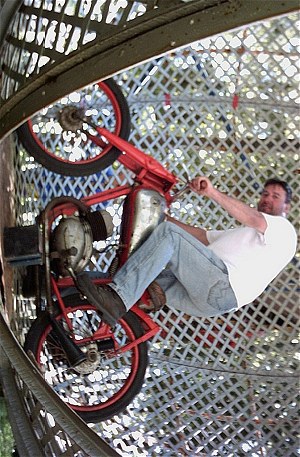 Of course, all eyes turned to me. Let me just say that it’s a crying shame the photos never came out, you’ll just have to take my word for it that I was a natural. Ahem!

The campsite was situated on a lakeside that provided a swimming and post-sauna plunge pool for all. Nobody batted an eyelid as naked men walked down the boardwalk and jumped into the lovely fresh water. This is the home of the sauna and brings with it a welcome relaxed attitude to the human body that many societies could learn from.

The evenings consisted of chatting about bikes, life in general, drinking beer and wine and eating the fantastic local Tampere blood sausage. I quickly developed the skill of politely avoiding being force-fed with vodka in huge quantities, by welcoming MZ riders whilst happily ignoring the mosquitoes. Yes that’s right. Me, who comes out in lumps like the Carpathians as the first sign of a midge, never got bitten once. I bought Boots’ own brand tropical strength insect repellent before I left home and applied it regularly and copiously. Whilst I sat unmolested in T-shirts and shorts my new friends were wrapped up in high collars and long sleeves and spent the evening flapping, swatting and manfully boasting Alpine like foreheads. That repellent was money well spent, yet despite its obvious benefits nobody would take it when I offered it freely.

Being this far north during mid summer meant that it never got dark, which was a remarkable new experience for me. The sun would set at about 11pm and the cue to go to bed was when you realised that during the conversation, the ghostly twilight had passed and the birds were singing to greet the dawn again, even though it was only 1.30am. Strange, but fantastic for someone like me who hates the long, dark, wasted evenings that England specialises in.

On Tuesday I arrived back in Stockholm at 6.30am and by 9pm that evening I was in northern Germany, some 600 miles south. I was determined not to have to pay the daft Swedish prices for beer and accommodation again. My reward for this epic feat of endurance was a delightful self contained chalet for just 25 euros and a local bar that I rolled out of after midnight as drunk as a lord having spent only 10 euros. See what I mean? However, the bike wasn’t running well and was down on power so there would be work to do the following morning. But I’m getting ahead of myself. 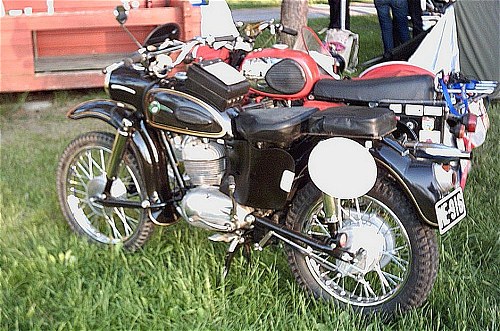 England were playing Sweden live in the world cup that evening and when an Englishman walked into the only bar in town, well the locals couldn’t believe their luck. I was just additional entertainment for them surely?

Not me, not a hope ! If it’s not Rugby League or bike racing, I’m not interested.

I sat down with my beer; facing away from the TV, jotting down my memories of the journey so far in my notebook. That fair took the wind out of their sails and it was obvious that they thought I was a little strange. By my fourth beer, the match was over and I was now sat at the bar when I noticed the landlady eating a lolly ice. Now that did catch my attention, as it was just what I needed and would save me rummaging through the bins sometime the following morning.

After they had watched me use the ruler on the edge of my Leatherman to mark off accurate 3mm graduations along the length of the stick with a marker pen, and then draw lots of parallel lines 3mm apart across the stick, I was officially classified as a nutter.

The local with the best grasp of English was ushered forwards to inquire what I was up to, although I’m sure he kept a healthy distance away from me and my Leatherman at all times. I explained what I was up to, but he was completely baffled. Paper was summoned from behind the bar and I drew the crank, piston, barrel and head of a Zweitakt motorcycle. Five minutes later and a crowd of locals were gathered around him as he explained how I planned to insert the stick down the spark plug hole onto the ‘Kolben’ crown, so I could accurately find 3mm before top dead centre and set the timing correctly.

By the time I had explained that I was riding a 30 year old German motorcycle and had rebuilt the engine en route in Finland, I’d transformed my standing from a football ambivalent nutter to a mechanically ingenious English eccentric, a compromise I could live with after that much beer.

Once the timing was set correctly the bike was completely transformed. The remaining journey home bearing my prizes for unluckiest rider (are you kidding, I found a place to rebuild an old engine within an hour of getting off the boat!), and second place for longest distance travelled (first prize went to a chap who had shipped his MZ Skorpion from Australia to Felixstowe), was pretty uneventful really. A noisy top end from western Germany onwards persuaded me of the attractions of the Rotterdam to Hull overnight ferry leaving me with a 100 mile trip across the Pennines to home.

After 4000 miles in thirteen days, the MZ TS250/1 got me home again, albeit with new main bearings and a swollen knee. The next job will be to strip the motor down for a complete engine and crank rebuild, ready for next year’s daft trip abroad. But where to this time?

Pass me the atlas will you please?

With thanks to Keijo Virtenan and my Finnish MZ rider friends for organising the Rally and special thanks to Paul and Jyri at www.jpsmotors.fi for the help to get me back on the road again.