Phil Speakman landed in Finland with his MZ’s main bearings knocking louder than his knees. Phil doesn’t speak any Finnish and he was about 150 miles away from the MZ rally he was aiming for. Help?

In desperation I’d sent out a request for a mate to put up an emergency call for Finnish help via the RealClassic message board. His 5.30am wake up call wasn’t appreciated (of course you can cross two time zones on an MZ), but the message went up nevertheless (cheers Robert).

Within a mile of the port I pulled to a halt at a red light and there up a side street to my left was a large Suzuki and Triumph dealership. Crossing three lanes of stationary traffic on red with all the aplomb that an apologetic Englishman with full panniers can muster, I pulled into the car park and was greeted by Mr Stern. Not his real name but it certainly suited. Once I’d moved my bike twice, because that’s where his delivery truck parks and ‘no I couldn’t park there either’, we went inside. Mr Stern’s English was very good indeed and he put his wide vocabulary to exceptionally good use in telling me that I was an idiot to leave Sweden on a bike in that condition. Then it clicked. He thinks I’m from Stockholm.

I explained that I had ridden from Liverpool and the problems only surfaced the previous day and I had more chance of a repair here than in Sweden. His stern tone receded slightly as he reached for the Yellow Pages, but his negativity expanded to fill that newly vacated space. After a few call he found one workshop who could indeed fix it and I should take it to them, in three weeks time.

‘Er, thanks but no. Can they recommend anyone else?’

Mr Stern inquired on my behalf and wrote down the name of a firm called JPS Motors and then popped off to the photocopier with his map book. 20 minutes later and I’m on the outskirts of town outside an industrial unit.

‘Hello, do you speak English?’ I asked with a hopeful grin.

A shake of the head was my reply, followed by a point to the rear of the engineering shop. In the back setting up a lathe, I found Paul Siren who spoke better English than me. I explained my predicament. I started the bike. We both sucked our teeth.

Amazingly Paul seemed quite happy for me to work on the bike myself, told me to ask if I needed any tools or advice and left me to get on with it. Both Paul and his business partner Jyri Nurminen were bike enthusiasts and they also race funny cars. I couldn’t believe my luck. 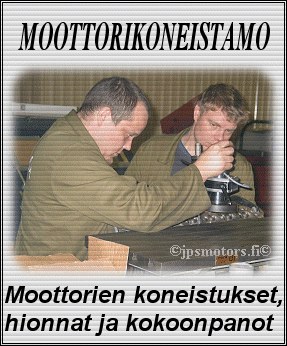 By 9.30am I had the engine out of the bike, lying on a large square of cardboard and drained of oil. Then my mobile rang, it was a chap called David who had seen the call for assistance on the RealClassic message board and was ringing with the contact details of a Finnish RealClassic club member. I explained that things were looking up again and after he wished me luck, I got back to the engine (thanks David). Once the head and barrel were off, I called on Paul’s advice for the first of many times that day. He agreed with me, both the big and little ends seemed fine and advised me to get the side covers off.

One minute on his lathe saw me clutching a 10mm bolt with one thread removed. This is used to pop the armature off the offside crank taper without damaging the crank thread that takes the bolt to hold the points cam and armature on the crank. We both waggled the crank and all seemed well.

The clutch cover came off complete with integral kick start mechanism, we both waggled the clutch basket up and down. We both produced a clunk clunk clunk that betrayed a completely shot nearside main bearing. There is the culprit, but how on earth do I get the clutch basket off without the correct tool?

The Fred Rogers’ MZ emergency phone flashed red as it rang in Winsford.

Fred lifted the cheese cover off the handset (Fred was first with the cheese cover, Batman just copied) and answered with his usual ‘Eh up’ (that phrase never really caught on in Gotham City for some reason). I passed on Fred’s advice and Jyri was despatched to their local bearing supplier and returned with two new 6306 bearings and one nut with an internal 24mm x 1.5mm thread as specified by Fred. This nut was screwed onto the clutch centre and Paul produced a Snap On puller set to pull on the nut, which with a few taps with a hammer to shock the system popped the basket off with no damage. Using a three-legged puller on the basket itself would simply distort the entire clutch and, as Fred had said, ‘you’d never find neutral ever again’.

I looked at my handy-sized travelling screwdriver, then looked at the machine screws holding the crank cases together. It simply wasn’t up to the job and I didn’t want to make matters worse by chewing up the screw heads.

‘Paul, do you have a BFOS I could borrow please?’

A grinning Paul returned with an 18″ BFOS and I set to work. Those screws hadn’t moved in over 30 years, they were steel and they were set in alloy, so gently does it, eh? Once the driver was firmly in position on the screw head, my 10mm spanner was used on the screwdriver shaft to crack open each screw one quarter of a turn. Steadily, one by one, they all loosened with an arthritic ‘crick’, but loosen they did. Yes, every single one! The god of atheists was obviously smiling down on me that day.

The reason the bearing had failed? Almost certainly it was due to corrosion that had attacked the hardened bearing faces during its 10 year lay up in a shed. Long term inactivity is bad news for strokers.

By 5.30pm I was fitting the split link to the chain and replacing the offside engine cover, delighted in the tricks I had learned from Paul that afternoon. Centralising the crank and gear shafts was no longer a worry for me. Neither does re-sealing the crankcases hold any fears for me in the future. Fuel on, full choke, ignition off and I gave the engine three or four kicks to prime the crank cases. Choke off, ignition on and a healthy ring-a-ding-ding lit up my blackened sweat streaked face with a massive grin.

I had bloody well done it!

Next: Phil finally reaches his destination, and has an urgent need for an ice lolly…