Phil Speakman starts to clock up some miles on his recently rebuilt 250 Trophy… and promptly runs into trouble. No problems, there’s another MZ in the shed. It’ll be fine to ride to Finland. Won’t it?

When you have rebuilt an old, unloved by most motorcyclists and yet interesting bike, you have two choices really. Do you keep it preserved and trailer it to shows or do you use it and watch all your hard work gradually age back to a slightly better version of where you started? You’ve spent a bloody fortune of course, that goes without saying, so do you actually want to use it and wear it out for a second time?

Of course you do, don’t be so soft! Otherwise you could have just painted and polished it regardless of whether the mechanics and electrics actually work and they are the hardest parts to actually get right. The bike is a 1972 MZ ES250/2 Trophy and regular readers should be familiar with this machine by now.

So off we went to the Isle of Man TT races where the Trophy happily transported me around the island for the week; clocking up over 600 miles and attending various VMCC runs and events. However, there was one fly in the ointment, sticky smelly SAE80 ointment at that. At fully open throttle, regardless of engine speed, oil was being forced out from the front of the nearside clutch cover; where the clutch cable enters the casing. Needless to say, this really shouldn’t happen and a cursory check of the gear oil showed that the level had risen and a quick sniff revealed that the gear oil had been thinned with fuel.

I couldn’t believe it, either one of the new crank seals had failed after only 1000 miles or the crank cases hadn’t sealed correctly internally.

That the engine would require removing and stripping down again was bad enough, but the fact that only two days later I was due to ride it right across Europe for the annual Finnish MZ Riders Club rally, well that really was disastrous.

On returning to the mainland, I had two days to prepare myself for the Finland trip. The Friday was spent servicing my 2003 Tiger 955i as a cast iron fall-back option should all old bike possibilities fail. The Saturday was spent prepping my faithful 1976 MZ TS250/1 Supa 5 that I had ridden to Saxony last October for an old bike rally (see RealClassic issue 23). All seemed well, so the Trophy was wheeled into the garage in regretful disgrace and myself and the Supa 5 toddled off at 6am on the Sunday, riding through beautiful hot and sunny weather to the ferry port at Dover, some 270 miles away. 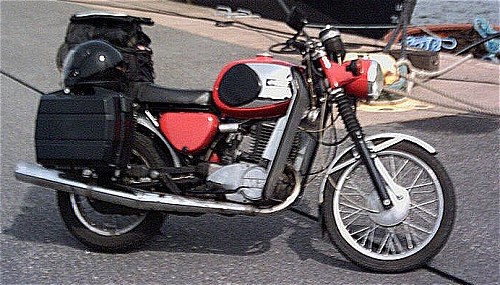 The journey through France, Belgium, Holland and Germany was uneventful and to be honest, could only be described as being ‘one for the purist’. Swelteringly hot, seemingly never-ending motorways ridden all day with just the respite of a guest house and a fine meal in the early evening. Despite carrying a tent (a £15 Tesco’s special), there was no way I was going to camp until I got to the Finnish MZ rally.

It was only after entering Denmark via the ferry from Puttgarden to RÃ¸dbyhavn across the Fehmarn Belt that my worries started. It seemed to me that the engine was getting slightly louder and had maybe developed the faintest of rattles? Or was it just my imagination? These motors do tend to make noises due to the engine harmonics and the large cooling fins, ‘it’s probably just the higher running temperature due to the hot weather’ I told myself. So ear plugs were inserted and all was well.

By the Wednesday afternoon I was crossing the fantastic bridge from Copenhagen to Malmo, the ear plugs had come out again, and I was listening intently. It was running noticeably noisily and there was definitely a chatter. But what to do? The mobile phone came out and I was immediately linked via text message into the free global information service run by ‘My Mates International’. Within a few hours, my mates at home had come up with a couple of possible local MZ contacts in Sweden should things turn out for the worst. Meanwhile, I dropped my cruising speed to 55mph, upped my petroil mixing ratio from 50:1 to 30:1 and pressed on northward towards Stockholm.

By early evening there was little room for doubt and I phoned my mate Phil Frost.

‘Who’s there ?’, Phil traditionally responded but in an obviously puzzled tone of voice 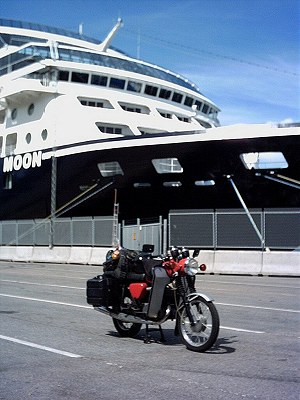 Shortly afterwards I pulled in for fuel, filled up and decided it was time to take a look at the engine to see if I could discover what was wrong with it. As I pulled out of the petrol station, a thought crossed my mind. ‘You know I’m sure that signpost says ‘ Tractor Museum This way ==> ‘ in Swedish’.

‘Now what would I expect to find in a tractor museum at home?’ I asked myself.

‘Blokes with beards and lots of tools’ was my hypothetical reply.

Half a mile later, an impressively hirsute man was looking at me strangely as I pulled up outside his workshop door. His English was minimal, my Swedish non-existent and despite my obvious faux pas of having a neatly trimmed beard within half an hour he’d helped me get the head and barrel off. We both agreed that the little end looked OK to us and the big end definitely seemed fine. That pointed to the main bearings as being the main culprits which was serious but not as imminently serious as a snotted big end.

We reassembled, both got cleaned up, I thanked him profusely for his help and was on my way. But not before he had shown me around his collection of Tractors and old cars. He had a passion for Triumph Heralds (as indeed so do I) and there at the back of the large shed, was a pre war DKW Favorit saloon motor car, which I explained had possibly been built at the same factory as my motorcycle.

You meet the nicest people on an MZ as well, you know!

The next day I completed the remaining 150 or so miles into Stockholm as gently as possible. The knocking was a lot worse and the MZ was beginning to sound like a knackered dumper truck. I had made contact with a local MZ enthusiast through a number provided by ‘My Mates International’ but he’d told me that there was nothing he could do to help and he didn’t know anyone in Sweden who could help. You see, MZs were never sold in Sweden and were an extremely rare sight indeed. This had become obvious the previous morning before the knocking had started, when I was crouched over the bike checking the timing was correct.

‘My God, an Englishman on an MZ’ announced the voice behind me as I sought 3mm before top dead centre. The voice belonged to a BSA Super Rocket owner called Ludde. He helped me with the timing and gave me his mobile number with the instructions that I should call him if I needed any assistance. My mother is always amazed when I tell her about such encounters and cannot understand my luck at always meeting the nicest people when I go away on old bikes. To me it’s just normal.

Heading into Stockholm seeking the ferry port, I arrived six hours early. On the way into the port, waiting at traffic lights on tickover became an embarrassing ordeal. I half expected to be approached by kids asking in Swedish for ‘two Cornettos and a choc ice, please Mister’.

I’d paid for the ferry months ago and there was obviously no useful help to be had in Sweden, so I thought ‘sod it’ and knockitty-knock-knocked my way up the ramp to the ferry that evening for the overnight crossing to Turku. I must confess, I have seldom felt so low, out of my depth and alone as I did that night. Around me on the car deck were people on modern bikes giving me sideways pitying looks and maybe it was just my mood but I’m sure the occasional schadenfreude smirk raised its ugly head. To try and console myself, I treated myself to a good meal and a bottle of wine in their best restaurant, then made an early night of it. However, despite the wine, sleep didn’t come easily and my sojourn was interrupted throughout the night with visions of having to leave my bike in Finland and fly home again. Yes, I had full European breakdown cover but I still didn’t trust them not to somehow try and wangle themselves out of an expensive relocation of both myself and machine. 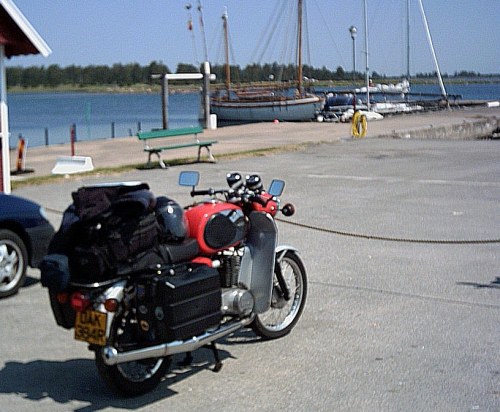 The next morning saw me rise comparatively late and my MZ was the only bike still on the car deck. The engine kicked into its new but inevitably short life as a dumper-truck impressionist and, ever so gently, I nursed the bike out of the port.

But to where? I’d no real idea where I was and it was still only 7.30am. I don’t speak the Finnish language and all I really knew was that I was at least 150 miles south from my hopefully new MZ friends, with no way of contacting them.

Things, presumably, could only get better…