It’s in one piece and ready to ride. Phil Speakman does the unthinkable, and actually concludes a rebuild saga. Steady on, Phil…

I felt like throwing my phone through the window at 7am on Saturday morning, but I’d only myself to blame for feeling like I did. I could of course blame Mike and Andy for leading me astray, via two real ale festivals (after watching the mighty Saints mallet the Owd enemy Wigan by 48 points), but it would cut no mustard. Mmmmmm mustard, lovely on those sausage and black pudding butties last night, I remember that much at least.

I had until about 11am to get my 1972 MZ ES250/2 ready for the MoT tester, if I was to have a hope in hell of riding it legally over what remained of the holiday weekend. That meant fitting the offside indicator, the rear wheel and brake plate, final drive chain and rubber gaiters before finally filling it up with gear oil and re-attaching the battery to see if everything worked, let alone start.

So that’s four hours, no help and a derby game hangover to work with. Sodding marvellous!

The only real problem was getting the brake light to work correctly, which involved the rear brake plate coming off a couple or six times, but once fettled correctly it is sorted for life, pretty much. Half a dozen priming kicks with the ignition off and the choke on full primed the crankcases, then ignition on and it fired on the third kick.

By 11:20am I had already adjusted the throttle to a steady tickover and was queued up behind a Bantam at the MoT station, ready for Malc to do his worst. By 12:10pm, Malc has locked up and I’m down to the tune of £20 in the pocket but up to the tune of a 12 month ticket and one big silly grin wide enough to see me right through to the end of the bank holiday. You see, the bike still has tax on it until the end of May, so it’s fully legal to ride again. 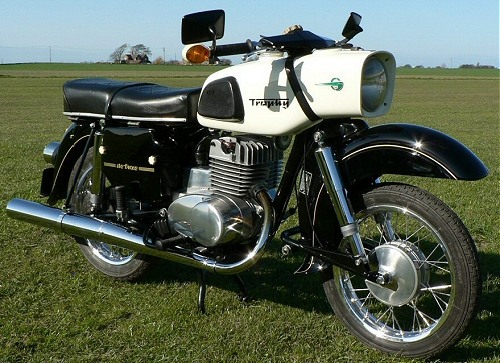 After a belated breakfast, a gallon of tea and a bath, myself and my latest restoration are back on the road with one prime intention. Can I do the 500 necessary miles to get this bike run in by Monday? I’ll certainly give it a go!

So off we go to Cheshire, the scene of its last fateful ride before the rebuild. No plumes of black smoke this time, oh no. Just the aromatic waft of 30:1 two-stroke (plus an extra dollop, just in case) and a beautiful, crisp ring-a-ding on the overrun as I keep it singing happily at about the 50mph mark. The ES250/2 doesn’t suffer as much as the later models from surging on the overrun and what little there is can be immediately eliminated by pushing the twist grip forward past its tickover setting against an internal spring. This gives it a dead throttle, until relaxing one’s grip returns it to its tickover position again. Why MZ ever stopped using this design of throttle assembly is a mystery as it works so well. 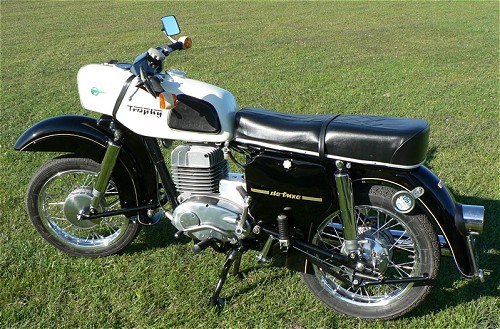 By the time I got to the home of Winsford-based MZ parts specialist Fred Rogers, who has supplied me with all my replacement parts and who rebuilt the engine for me, any doubts about my set up and fettling ability are gone. Every single part of the bike feels right, smooth and working just as it should. Nothing even needs adjusting, not even one single cable adjuster!

Fred is absolutely delighted once he sees the bike. Between the two of us we coo over it for a good half hour like a pair of dotty old dears would do to a baby in a post office queue. But enough of this mutual appreciation society, this wasn’t getting the engine run in, was it? So I headed off in the vague direction of home and maybe beyond.

Until I completely lost the clutch, that is.

I knew it was too good to last!

However, it could only be one thing. Couldn’t it? Out came the Leatherman and sure enough, all three stainless machine screws that secure the clutch adjuster plate to the nearside engine cases were barely better than finger tight. Off came the plate, the clutch adjuster cam was reset back to whence it has slipped from, which returned the lovely polished alloy handlebar lever to its correct position of repose and the plate was replaced once more, but tight. All in all, less than 10 minutes lost and within the hour I was approaching my local microlight flying club at Ince Blundell, near Southport. 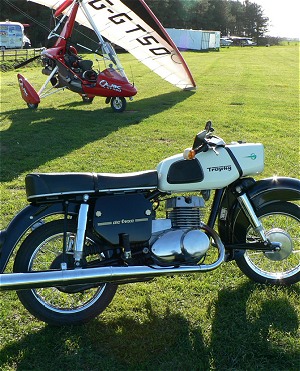 Do you remember the adverts in the 1970s, where gentlemen playboys dressed in smart casual all seemed to drive their sports cars to airfields to enjoy flying their own private planes at weekends? Well if it was good enough for a Ford Capri then it’s good enough for my MZ! Out came the camera. Chances are it will never look so good as it does now so best to get it snapped for posterity as soon as possible. It was a pity there was nobody wearing brown flares and a tank top at the field though. Sigh. 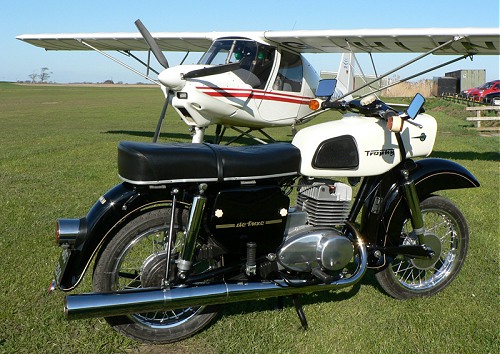 By the end of that first afternoon, I’d put 150 miles on the clock. Another 70 miles on the Sunday and a trip to Uttoxeter on the Monday through wind, rain and mud strewn B-roads had increased my mileage to over 350 miles, but left it looking like it had just completed an International Six Days Trial. However, the benefits of having a bike in a condition such as this, is that it is very easy to keep clean. Dirt simply falls off with hot soapy water and once dry a quick buff with a soft cloth and it looks good as new again. Some people reckon that if you ride a shiny bike, you must spend forever polishing it to keep it that way and therefore you must never actually ride the thing, but it simply isn’t true. There’s a damn sight less work in keeping an immaculate bike immaculate than trying to get a tatty one looking tidy. 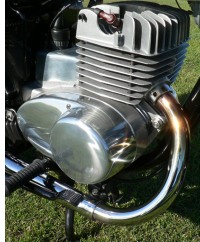 All thing being equal, by the end of next weekend I will be able to change the gear oil and ride it normally again. I want to get plenty of miles on it so that the engine is nicely loosened up for June, when I’ll be riding it to Stockholm ready to jump on a ferry to Finland for my summer hols. C’mon, you didn’t seriously think I was just going to polish it and show it did you ?

As for those who look at it and wonder why I would spend all that time, effort and indeed money on an old MZ, well there’s one very good reason. This isn’t just any old MZ you know, oh no.