Phil Speakman considers relativity, a brief history of time, and the benefits of an opposable thumb…

It’s funny stuff, time. It never seems to go how you expect it should. Sometimes it races along and other times draws onward interminably.

I often wonder what happens during those ‘Oh noooooooooo I’m about to crash’ moments when suddenly everything slows down and the clarity of the situation in which you now find yourself, becomes startling. Split second decisions, become surprisingly long drawn out; well considered internal debates.

I remember doing a handstand on the bars of my Honda, thinking ‘I shouldn’t have shut off that throttle so quick’ and I was well down the road of ‘of course, if you hadn’t opened it so bloody quick in the first place we wouldn’t be doing acrobatics down the High Street’, when I realised that the back end was starting to skip about again under full throttle. I baled out and even while I bounced down the road on my left hip and elbow, and the VFR slid to a halt into the kerb, I somehow seemed to have ample time to mentally tot up the cost of the new panels I would need to get it back on the road.

Where does all that extra time come from?

It’s as though human minds are able to carve time into much smaller slices than normal, in the way that some people reckon that race riders are able to accomplish at will. They appear able to get their internal mental clock to tick tock at the far faster speed that us mortals only experience in those hopefully occasional extreme situations.

Anyway, back to my 1971 MZ ES250/2 Trophy rebuild. The engine has returned home safely after its rebuild. The motor has been completely rebuilt, following my instruction to the letter, and every single wearing part has been measured to assess its tolerance and suitability. Even a few gear cogs have been replaced because the teeth showed signs of the very slightest sign of chipping. New bearings throughout, a crank rebuild and complete set of new gaskets. The piston and rings were showing hardly any wear at all, so they haven’t been replaced.

Oh, but my, it does look good. 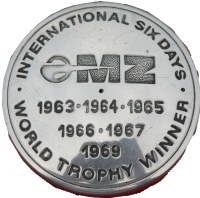 Likewise, the tinware. Those Classic Transfer ‘Trophy’ and ‘De-Luxe’ badges contrast well with the paint behind the lacquered top coat. After half an hour of fussing over the repainted parts, I start to wonder… what the tank will look like if I put all the bits back on to it?

A couple of minutes with the polish and the much admired tank cap looks the part. Is there any better fuel cap in the world than one of these 1970’s MZ caps? The tank’s really looking good now !

I’ve drawn a complete blank in finding a new/old stock set of ‘Kniekissen’ (or the fuel tank knee pads to you and me), so the old ones got a clean up in the sink with washing up liquid and a stiff brush. Once dry, I ‘Back to Blacked’ them and started on what should surely be the simplest of tasks of replacing them on the tank. The offside one went on fine, but I just couldn’t get the nearside one to flip that last little rubber corner over the steel lip. Not wanting to get a screwdriver anywhere near my lovely shiny tank (you know tears would be bound to follow), I realised that if I just pressed the rubber pad hard in the middle, then it would expand outwards allowing the pad to settle home. 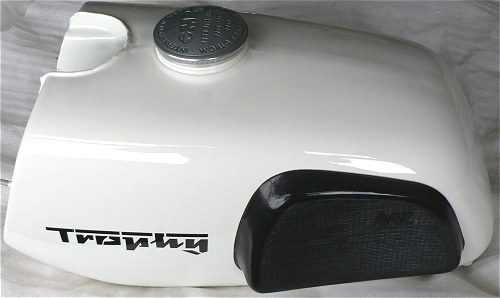 As I pressed down hard with my thumb, time slowed down as my brain’s clock speed altered, slicing those split seconds into wafer thin slithers. If anyone had been talking to me, I’m convinced they would have sounded like a 45 played at 33 (c’mon, we’re all old enough here at RealClassic to remember vinyl aren’t we?).

I watched in strangely detached fascination as my right thumb slowly ‘gave way’, dislocating itself to the point where it faced in completely the opposite direction to my index finger. As I took my hand away from the tank rubber, my thumb stayed in that incongruous position for a split second, then clicked back into its socket as my mind flicked back once again to normal time perception again.

Why does the body feel the need to go walkabout when you have pain like this? I must have walked in and out of the kitchen half a dozen times before the pain settled down to a dull throb. Yet in whichever direction I chose to run, it never seemed to be in the right direction to escape the agony.

Similarly, I once dropped my Triumph Herald off its jack, trapping one of my fingers between the refurbished drive shaft I was refitting and the transverse spring. I damn near completed three laps of the block that bitterly cold January afternoon, the neighbours thinking I’d developed a strange new fitness regimen involving a bizarre form of skipping with one hand between my legs. 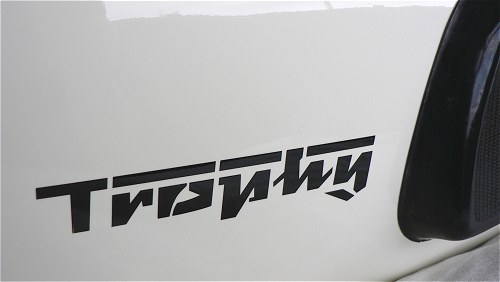 So, my best intensions of getting the rear mudguard and the wheels back in position on my free Friday afternoon went down the drain. For the rest of that day I could hardly grip a spanner, let alone hold a wheel in place with one hand whilst trying to locate the spindle home with the other. By Saturday afternoon, my hand felt better enough to try a trip to Southport on my MZ ES150. All seemed well, as long as I operated the indicators with my left hand because my right thumb still hurt too much. Eventually I gave up and reverted back to sticking my hands out instead, as it was both less painful and less wobbly.

That ride at least gave me the confidence enough to decide to attempt the trip into Shropshire on the Sunday, but as for the re-assembly and the preparation for the MoT? Oh well, there’s always next weekend.