Phil Speakman started what should have been a straightforward crank rebuild on his stroker, then suffered a strange interlude with aromatic hair care products. Then the whole job went up in the world…

The last time I took my MZ ES250/2 Trophy out for a spin, half of Cheshire disappeared under an acrid black cloud. The MZ Riders’ Club were having their annual day out at Mill Meece water pumping station in Staffordshire and it was sunny, so what better way to spend a Sunday afternoon?

The National Autocycle Club ride-in always brings a collection of interesting little machines, but the sight of the pumping engines in steam is truly a wondrous sight guaranteed to bring out the Dibnah in even the shallowest of Trinny and Susannah fans.

Sure enough, the bike made it there and back (it’s an MZ after all!) but halfway home it was obvious to all and sundry that my crank seals had finally failed and I was burning gear oil at 3:1 or thereabouts. The ES250 engine’s crank bearings are lubricated by the gear oil and not by the petroil mix as is the case with the later five speed TS250/1 engine. Therefore unlike the Supa 5, replacing the seals requires the crank cases splitting and so whilst I’m about it I may as well get the crank rebuilt.

A friend with far more experience than myself said he would do the job and rebuild the crank and anything else needed whilst he was about it. So one Sunday evening, in a couple of hours, the engine came out. 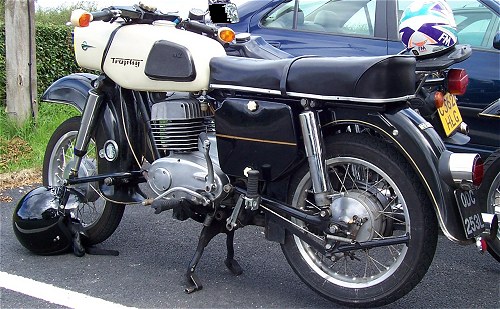 I say ‘a couple of hours’, but it was probably more like three and a half. Most of that time was spent lying on a cold garage workshop where the light just doesn’t seem to penetrate, fumbling for bolt heads and trying to hold an oily torch in my mouth. During that time, I must admit to thinking ‘why the hell do I do this to myself?’

When all’s said and done, rebuilding bikes is meant to be a hobby that gives me pleasure. So can anyone (Marquis de Sade excepted) please explain to me the pleasure to be derived from any of the following:-

Lying down on a cold and damp concrete floor?

Getting up again to get the correct spanner this time!

Lying down again only to ‘discover’ that I’d somehow picked up a piece of wire brush in my underpants?

Managing to put my dodgy left elbow (caused by high siding a Honda VFR750 outside Standish Police station) in the very position that causes me to leap vertically upwards like a scalded cat ?

Finding that missing 6mm nut by the traditional method of kneeling on it?

Wondering whether that split link in the final drive chain did actually reach escape velocity?

Cleverly standing up slowly whilst carefully keeping an eye on those vindictive handlebars, only to crack my head on the underside of the drill stand ?

Reaching around for the other end of an engine mounting bolt, only to be rewarded with the seeping cold realisation that I’d just put the back of my head in that large pool of aromatic gear oil?

Discovering that once I had the engine in my hands, I really should have removed the horn if I actually wanted to get it out of the frame?

People in the pub looking at me strangely as I stand in the corner of the bar on my own, smelling faintly like a male tomcat, despite washing my hair at least 15 times?

Not being able to walk properly for the rest of the week due to a swollen knee?

Afterwards in a nice warm bath (albeit one seemingly shared with an invisible male feline), I started thinking back to carefully chosen wise words of guidance once imparted by a BSA enthusiast friend. Namely, ‘Buy a hydraulic bike lift you stupid ####!!!’

In the pub, I mentioned this pearl of wisdom to my mate Mike (and indeed the rest of the public bar), shouting at the top of my lungs from my lonely position in the corner. The following day he phoned me to tell me that ‘Smiffy has got one that he doesn’t use, almost brand new, £150 to you if you want it?’

Of course I bloody well wanted it ! 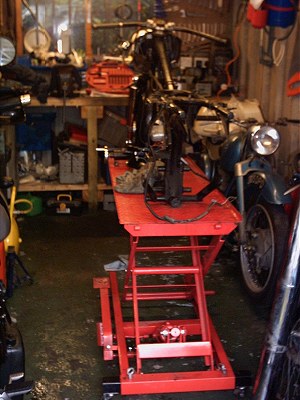 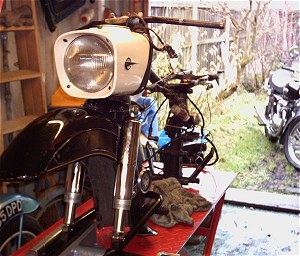 The following Monday afternoon I was like a little kid on Christmas Day with a new toy but with no batteries. I reckon kids these days are spoilt by 24 hour garages that stock batteries, not to mention all day TV. They’ve never spent an afternoon watching the trade test transmission in the days when the TV repair man was a friend of the family. You see, I had a new and very heavy hydraulic bike lift lying in the back of my car that I couldn’t possible lift out on my own to play with, could I?

It took three of us to lift it in and one of those was 6′ 3″ and 22 stone. I would have to wait for the neighbours to return home from work to give me a lift and that would be hours away, wouldn’t it?

Ten minutes and one damn near hernia later, the new lift was on my sorry excuse for a patio being lovingly soaped down with hot soapy water. Once cleansed of moto-crosser gear oil it looked brand new, with not a mark on it and I was as giddy as a schoolgirl. I forget how many times my poor little Jawa went up and down that afternoon but I’ve started calling it Otis. It was all done in the interests of safety and getting to know the equipment, you will understand. I didn’t enjoy myself one little bit.

Once I’d moved the lift into the garage, a daft thought came over me as is the want of stupid ideas. ‘The ES250’s engine won’t be ready until the end of January at the earliest. So whilst I’m at it I can get the frame, swinging arms (good old Ernie Earles), footrests and stuff, down to my local powder coaters for a lovely new coat of gloss black. Oh, and those brake arms need chroming and whilst I’m at it — why not get that rear wheel re-laced with stainless spokes to match the front? Then, if I should accidentally drop off the tank, headlamp, side panels and mudguards for a new coat of ivory and gloss black with a smart gold line, that would really tidy things up a bit wouldn’t it?’

By the following afternoon the engine-less Trophy was reduced to a pile of bits in two plastic tubs. No lying on the floor was involved, no lonely evenings in the pub and not one single quivery bottom lip moment whilst stood there rubbing my head. My BSA mate was right, why didn’t I get one of these things years ago? Mind you; they do have their drawbacks, in that they encourage you to get on with things because the job becomes pleasurable again and you can actually see what you are doing.

This little job started off as a simple crank rebuild but now has grown into a full restoration. 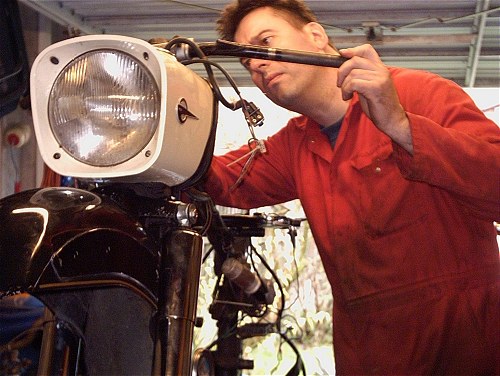