‘What I did on my summer holidays’. Rebuilding a real classic two stroke single almost earned KarlB an A*, but smoking is not permitted on school grounds…

I was going to rebuild the original motor for my MZ ES150, but another MZ TS250 Supa 5 came along and as that needed paintwork doing outside, or at least with the garage doors open, I thought I would postpone the ES till the winter and forge ahead with the TS.

Now us teachers have to plan ahead as we tend not to have too much spare time during term time. I was just hoping that I had ordered all the bits that I might need. I had seen and heard the TS running and apart from a slight small end rattle it sounded fine. Unfortunately, standing around a farm with just a cover over the top had allowed the rust to take hold. Luckily East German bikes are made out of heavy gauge tubing and solid alloys. This is what I found on dismantling the bike into its major bits:

A fair bit of rust on the frame and the chrome was all shot on the tank and silencer. The gaitered forks were perfect, however, and the paint, though faded was not rusted through. Time to get the wire brushes and red oxide out.

I had decided that this was going to be a cheap rebuild, so it was smooth Hammerite all round and the chrome was sanded, smoothed and painted. The exhaust became matt black with heat resistant paint. I had seen a yellow MZ in the past and was fortunate to find a picture via google images. Ford yellow it would be. Lots of sanding, undercoats and topcoats (with petrol resistant lacquer on the tank) and I ended up with lots of shinier bits. 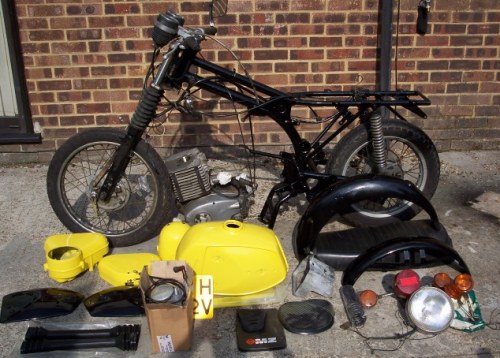 I still hadn’t done anything with the engine yet as I had a twelve volt conversion kit from MZ-B to fit. From previous experience I know it is easier to do this with the engine in the frame. Getting MZ engines back in just requires a suitable box so that you can get the a rear bolt in, then it just swings up. One bonus of not having a down tube in the frame.

It all went together quite well. I had to make up a piston steady for overhauling the small end. Old MZ manuals give you all the sizes for the engine tools you might need, so it is easy to knock them up yourself. I made the piston steady from wood as it just holds everything in the right place and doesn’t need any real strength. I replaced the old small end bearing with a much better Japanese one (thanks to Grenville, our section rep, for that tip).

Wiring up the MZ with its new 12volt kit was, as always, straight forward. The only confusion came in the headlight as every MZ I’ve owned has had a variation on a theme for the indicator electrics. 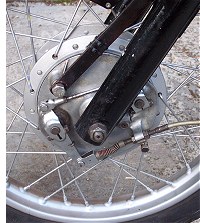 Last up was to add a Honda CB175K4 front wheel to the bike. This is a common mod to MZ TSs as the original brake is garbage, mainly as the actuating arm in the drum is too small so that it will fit inside the drum. Neat, but resulting in poor performance.

To add the Honda drum means swapping the forks over, as the torsion arm is on the other side and then making up a new cable. Luckily I had remembered to order the silver solder! I just used one of those small butane burners for hobbyists, plenty hot enough and a nice small directional flame. Brings back my apprentice days, does that. 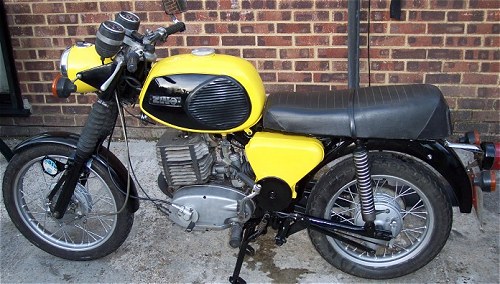 So having bolted it all together I ended up with this. Bright eh?

Problems? Well it oiled up the first plug which meant a push home as I’d forgotten the plug spanner in my tool roll, duh! Luckily it was only a mile or so downhill. The fuel tap filled with debris and meant a clean out of the tap with a full tank, not fun. Working in the oil industry for twenty years gets you used to sloshing petrol around without bursting into flames. The front shoes were knackered; even though they looked OK they had gone solid as iron. Replacements transformed the stopping power. The exhaust sounded bunged up so it got the caustic soda treatment overnight which freed up the engine and completely got rid of the surging on a closed throttle (always a problem on MZs and easy to fix with five litres of caustic and a hot water bung in the end of the exhaust).

The final mod was to drill out the idle jet with a 0.5mm drill. The TS250 was not meant to tick over, you were supposed to blip the throttle at the lights in order to ensure that the engine got enough lubrication. Us westerners like a tickover on our bikes. Now it thuds away at around 1000rpm quite happily.

It is a real blast to ride, motoring up to eighty easily with more to come, but I’m not that cruel to engines. The later ETZ rubber engine steady seems to make the motor even smoother, the original fell to bits in my hands. Apart from the strange noise the new chain gaiters are making as they bed in the bike is one of the quietest MZs I’ve heard.

So there is my summer report, just in time for the new term. Grenville our local MZ section rep came round and after a blast gave it 10 out of 10, not bad for an old smoker!

And yes, I know the badge on the tank is upside down, I think I will leave it that way. 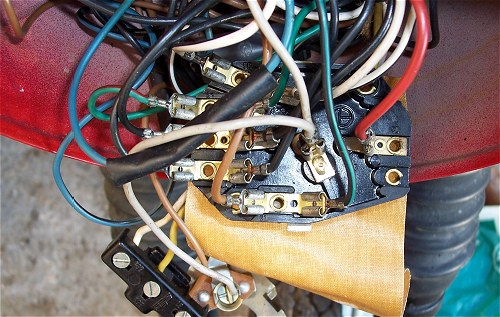