It’s Bonfire Night, so what better time to catch up with the second instalment of PaulG80’s Diary of a Sadman. Time to start making a big pile of bits; anyone got a light?

Right then where were we?

Ah yes. I remember now. I had just finished with the first part of this series… in which I threw myself upon your mercies for buying Helga the MZ.

So time to start stripping her off and see about getting her going (oooeerr).

First job was off with tank closely followed by the seat. Hmmm — not a lot of bike left all of a sudden. Next I took the bull by the horns and removed the carburettor. You may at this point recall that Helga has stood since 1996.

You may or may not be aware but petrol, especially modern unleaded, goes off. In some cases in just three short weeks it can be become unusable. Now I don’t know what happens chemically but the stuff that makes it petrol stops working. Stale fuel is also characterised by a peculiar smell, sort of like varnish or paint. If left long enough it can leave a yellow coating everywhere and block all your orifices. (In the carburettor… you lot at the back).

Now if you mix that with two-stroke oil as these MZs run on pre-mix (what’s autolube then?) you get a sort of primeval sludge left in the area where once was petrol. After recording this effect for posterity, I turned my attention to the fuel tank and what was sloshing around inside. Well, let me tell you; on smell alone I could have creosoted a fence with it. To say that it was vile was an understatement. Still at least the tank doesn’t have any leaks. This may be because when I removed the tap there appeared to be a hard Vaseline-type substance all around the hole on the inner edge. This was soon removed by an application of a suitable screwdriver blade. 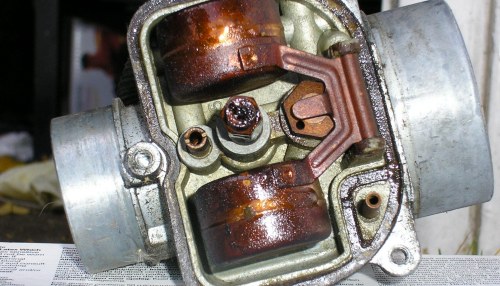 I took the carburettor, complete with brown sludgey mess, inside to work on because we have a marvellous tool, which could have been designed for de-gunging carbs. Enter the ultrasonic cleaner, a brilliant piece of engineering. Basically it’s a bath of cleaning substance, in this case Jizer Bio, which is heated to 50-degrees centigrade. When the liquid is on the boil you then lower your dirty bits in. A button is then pressed and lots of tiny ultrasound vibrations are created. After 15 minutes of such treatment and a quick squirt through with the compressed air the carb was clear and clean. 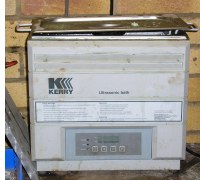 A quick word about Jizer Bio — it has all the cleaning properties of good old fashioned Jizer but you can pour it down the drain when you want rid of it as it is biodegradable. It is difficult to find and the smallest canister is five litres but from an environmental point of view it’s a good idea.

When the seat came off it exposed the electrics. The first thing that struck me was the mechanical 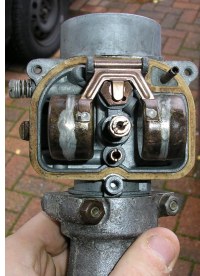 voltage regulator box which had no cover and looked rather the worse for wear. Looks like a job for one of CMES’s electronic boxes…

The frame looks in good condition and I am in two minds as to paint it or not. It might be an idea while it’s all exposed but I’ll decide sooner or later. The exhaust came off next and looks horrible so I may try and track down a good secondhand one.

With carb cleaned and reassembled it was time to put it back on the bike and check a few other things. I used the battery from Matilda (my other RealClassic) to check the electrics out. After twiddling the odd key around left and right a few times I found the ignition position. The indicators worked and so did the sidelight in the headlamp.

Unfortunately the headlamp bulb was a strange milky colour and refused to illuminate. The rear and stop lamp didn’t work either. Still the most important bit is still to come. The question of… do we have a spark?

I rooted around in the garage and found a spark plug. I then held it against the cylinder head and flicked the points.

‘Right’ I thought ‘hold it against the head’ and I turned the engine over with the kick-start. Lo and behold a tiny orange spark jumped across the electrode.

I awarded myself a celebratory cup of tea, in my RealClassic Super Sturdy Shed Mug of course, and called it a day at that point.

So far the shopping list stands at: new battery (ordered); electronics box from CMES (01454 323434); headlamp bulb (maybe one of those nice 6v halogens from Paul Goff). Costs are at a minimum and so far I am up to £75 including the purchase price. I suppose the next thing to do is get it started. I think I’ll make you wait though, for the next gripping instalment.