Seeking a winter project, PaulG80 sought something… unusual, and settled on a two-stroke export from the old East Germany. The first part, then of the Diaries of a Sadman…

Right let’s start at the beginning. I had seen this bike parked out of general sight for the last year or so every time I drove to work. By chance I put a note on it saying I would be interested in buying it. After a week or so I got a call saying that the owner was up for it. A change of funds later and it was mine.

Next move, after pushing it round to my mate’s house, was how to get it home, as it could not be ridden. Enter the good old Mondeo estate. I took the wheels off and got my first surprise. The spindles pulled out by hand and no bolts were seized. I say ‘surprise’ because this bike has been standing since 1996. With the front wheel out and the QD rear off, the handlebars were flattened and into the back of the car it went.

Now I don’t know when these rugged East German machines became the object of derision and howls of laughter amongst motorcyclists. But I wonder if they knew that in the 1960’s MZ was at the forefront of two-stroke engine development — would they still be laughing? Indeed much of the Japanese two-stroke technology owes much to MZ and its pioneering designer Walter Kaaden.

The factory at Zschopau has been producing motorcycles since WW2 at what was originally the DKW factory after this marque had been relocated to West Germany. The machines produced in East Germany were named IFA and were mainly two-stroke singles of between 98cc and 249cc, and mostly DKW clones. However in 1952 a two-stroke, flat twin 343cc bike was launched and continued in production until 1956. In 1960 the machines were renamed MZ which is an abbreviation for Mottoradwerke Zschopau.

Walter Kaaden’s work was mostly in the area of exhaust technology. He realised that the shape of a two-strokes exhaust had an effect on power. He used pressure waves created in an expansion chamber to increase crankcase pressure and give a supercharging effect to the engine. This basically used the exhaust gases to suck the inlet gases in faster, as I understand it. But remember; I have an IKNAA (I Know Nothing About Anything) qualification. 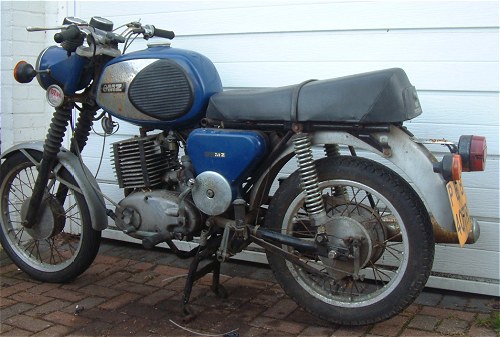 The 250cc two-stroke engine in MZ motorcycles can be traced back to 1956 and the ES250 Trophy and the ETS Trophy Sport of 1969. Both have the now traditional hump-backed tank and long exhaust silencer of most MZ models, as well the simplicity and practicality that the East German market dictated. These models lasted until 1973 when the TS models were introduced.

Right enough history — back to the plot at hand. With the bike back safely at Castle G80 the first problem was that it wouldn’t go in the garage as Matilda and Beatrice, my two other RealClassics, were being decidedly snooty and taking up as much room as possible. So poor old Helga (yes; I’ve given her a name) has to stay outside. And there she sat for a month or so while I had problems with the other two and DIY duties to fulfil.

So, why an MZ I hear you cry, between gales of laughter. Well it was there and it was the right price (cheap). I have never had a two-stroke over 125cc either so I was interested in the performance (or lack of it more like). I used to have the 125cc version, I passed my test on that, and went to Devon and back one Easter weekend. That was a big adventure as it was all on A-roads because I still had L-plates up. But that’s another story. And finally, as most of the Herts. and Beds Mafia will testify, I have absolutely no taste in bikes whatsoever

Oh and I have to give you lot someone to laugh at as well. 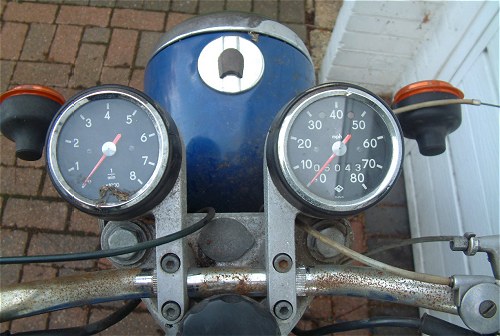 Now all projects start with a list and this is no exception. First job is to remove the carb and put it in the ultrasonic cleaner (every workplace should have one) to get the worst of eight years worth of crud out. Then it’s clean the tank out time which will probably be done by putting some stones inside and giving it a good shake. A battery will need to be obtained and hopefully I will have a big cloud of blue smoke hanging over my road. 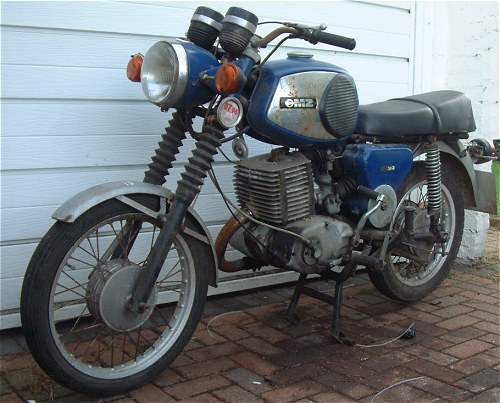