We know that RC readers love a challenge, and these photos are definitely challenging! Can you identify a vintage motorcycle or an engine which might once have powered a classic bike?…

Keith Bennett is hard at work, unravelling his family tree, and in the course of his investigations he has been given this photo. ‘A cousin I met for the first time this month gave me a photo of himself and sister, sitting on his father’s motorcycle’ says Keith. The photo was taken some time in the 1940s, and the bike is believed to be a Panther.

Well, P&M started building bikes back in 1904 and by 1922 had developed the Panther brand which graced the tank of a 555cc, 4.5hp four-speed side-valve, and an ohv 499cc three-speeder fitted with drum brakes. So it’s perfectly possible that this bike is one of their 1920s models. In fact, it looks a little like the model which was used by the RAC in those days. Does anyone recognise it?

Meanwhile, a plea from Michael J York has also arrived at RCHQ. ‘I am trying to identify what I believe is an old motorcycle engine that is fitted to a lawnmower… yes, a lawnmower. I believe the engine to be a JAP, dated about 1909, open valve, sidevalve 500cc. Originally I thought it was a Norton until I found JAP stamped on the camshaft. But I’m still not sure!’ 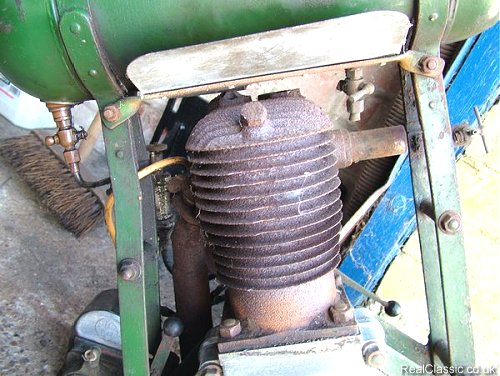 JAP engines, built by JA Prestwich in north London, powered absolutely everything for many decades – including motor cars, aircraft, water pumps, milking machines, hay elevators and even Brough Superiors. So if this is a JAP motor then it need not have been near a motorcycle at any time in its life. Mind you, as Odgie is proving in the magazine with his JAP-special project, it could certainly be built into one… 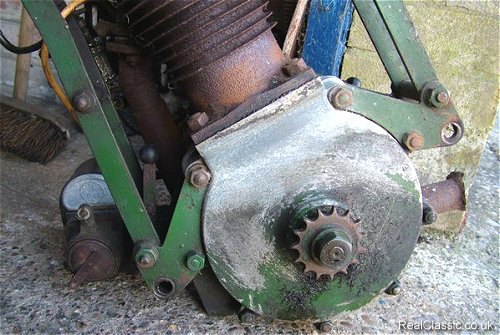 Anyone have any ideas?