Retro Revivals from Triumph and Steve McQueen, Morgan, Lambretta, Kawasaki and Royal Enfield pale into insignificance next to a new road bike from MÃ©tisse. Martin Gelder trips over the bike they tried to hide…

I rolled up to the ‘Motorcycle Live’ show at the NEC expecting to see new super-scooters from Honda and BMW, some rebadged BMWs from Husqvarna, a new Ducati that only racers will be able to afford and lots of last year’s models with new colour schemes and other insignificant detail changes. There’s a recession on, don’t you know, and most of world’s motorcycle manufacturers are feeling the pinch.

The last thing I was expecting was a brand new road bike from a British manufacturer, but that’s what MÃ©tisse have launched. Not a re-manufactured Meriden motor in a shiny frame but a ground up, pukka, buy one and ride it on the road, British bike. Like a Norton Commando 961, but without any of the hype.

The MÃ©tisse 997 Street Scrambler is an eight-valve DOHC fuel injected air and oil cooled parallel twin in a 4130 chrome-moly steel cradle frame. A claimed 97bhp at 8,000rpm and 187kg (412lb) dry weight should give good performance, and Ceriani forks, Falcon shocks and Brembo brakes should keep everything in line. The twin rear shocks and 19″ front wheel suggest traditional rather than modern handling, but if there’s one thing MÃ©tisse know, it’s how to build bikes that handle. 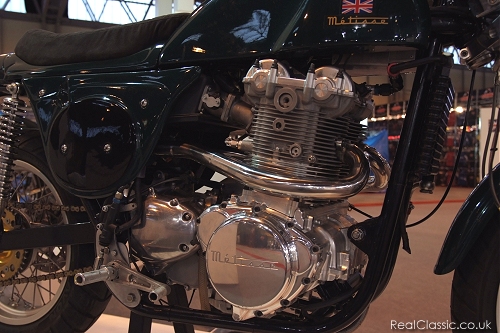 The MÃ©tisse will sell for about £18,000 + VAT, with buyers able to choose from a vast array of options to make the bike they buy their own.

The 997’s looks are on the understated side of traditional, and I think that might be a problem for the company. They had a large stand at the show, but it was always quiet; I doubt many show-goers will have taken in the new road bike, assuming it was just another version of the Steve McQueen MÃ©tisse Desert Racer.

They will probably have been further confused by the presence on the Triumph stand – just a short tumbleweed roll from the MÃ©tisse stand – of a Steve McQueen lookey-likey publicising the (take a deep breath) ‘Triumph Bonneville T100 Steve McQueen Special Edition’ which is being launched by online retailer Firebox. 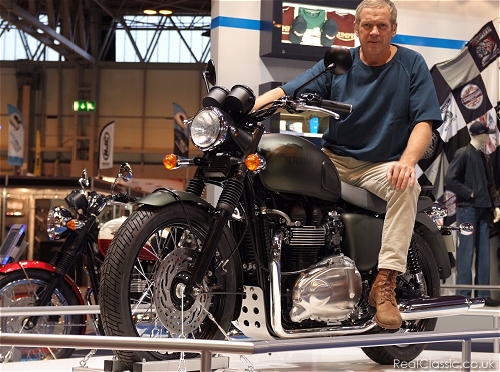 It costs £7,700 delivered, and features matt olive green paint, a stencilled Triumph logo on the tank, and an authentic, approved, etc, Steve McQ signature on the sidepanel. Only 1,100 will be produced, which actually seems like quite a lot. Cynicism aside, it did look pretty cool, with the matt paint matched by blacked out components. 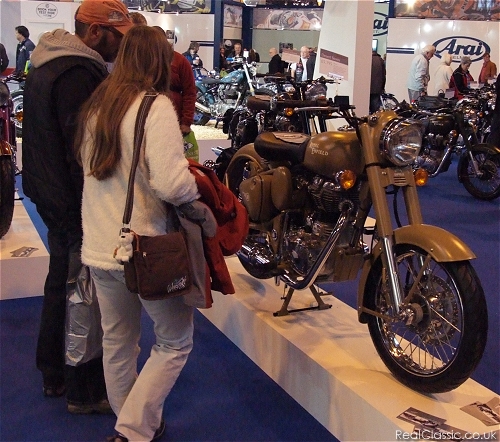 Also climbing on the military bandwagon are Royal Enfield, with the ‘Desert Storm 500’ which is basically a mud-coloured EFE Bullet. Much more interesting were the chopped and bobbed Bullets built by The Chopper Squad, Ridley Racing and the good folk at Sideburn Magazine. 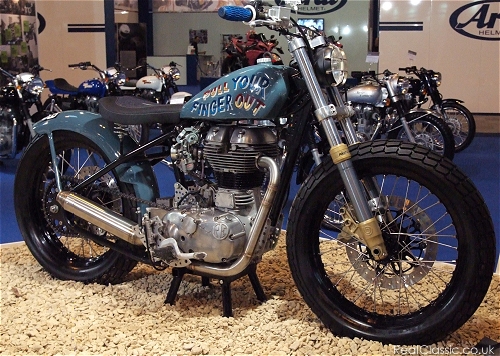 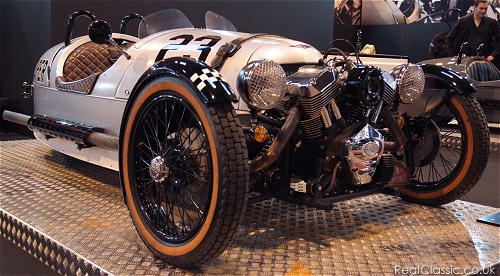 I didn’t even ask the cost of the S&S engined Morgan three wheeler. Pass me that flying jacket!

At the, err, less-expensive end of the market, CPI seem to have hit on a winning formula with their Sprint 125 retro-cafe-racer-style-learner-commuter gem. 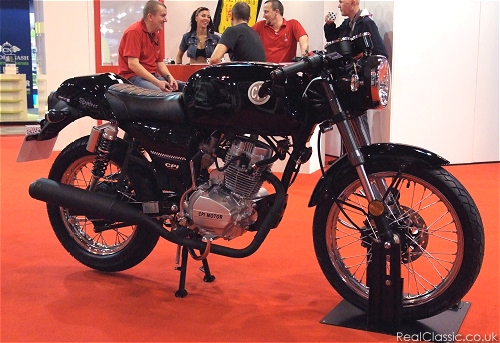 A set of Ace bars, some chequer tape and a bit of attitude have transformed an otherwise workaday Taiwanese 125 into the sort of thing I’d have loved when I was 17. A 250cc version is on the cards, so all we have to do is persuade them to make a 500 as well… 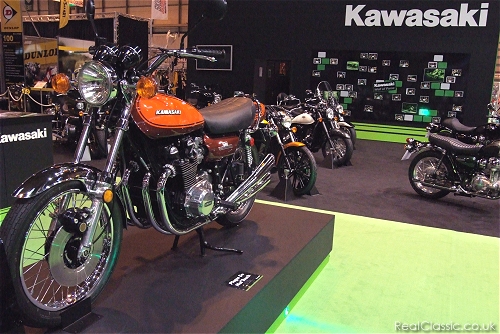 Of the big four Japanese manufacturers, Kawasaki were the one to make the most of their heritage, with a restored Z1 standing proud amongst their classic and cruiser range of new bikes.

The W800 is now joined by a special edition which kind of harks back to the Harley Davidson XLCR (a bit) but manages to look okay in its own right. 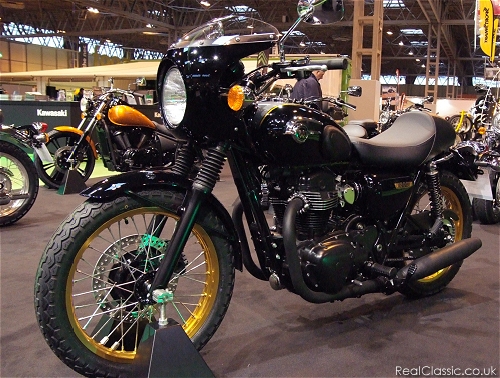 There’s something for everyone at the NEC – err, I mean ‘Motorcycle Live’ – show, even down to a diesel bike for balding men of a certain age to pore over. 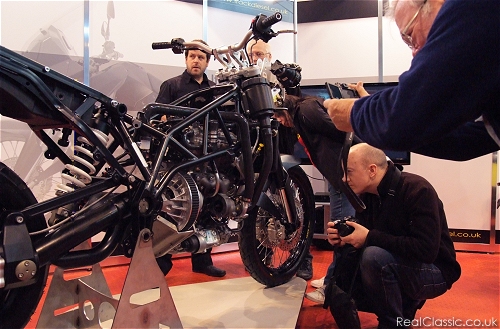 And finally… I’m not sure if it really belongs on RealClassic.co.uk, but I was quite taken with the Husqvarna Nuda. This has nothing to do with them plying me with free coffee and bacon sandwiches, nor the fact that their bike’s name sounds a bit rude. Based around a tweaked BMW F800 engine, the Nuda is currently only available in an ultra modern package, but they also had a retro-styled concept bike on show. 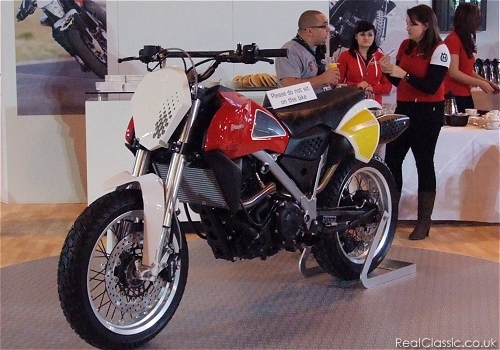 Similar power and weight to the Metisse, similar off-road heritage, but in a much more compact package and for about a third of the price.

Motorcycle Live doesn’t set out to be a show aimed at the classic enthusiast, but there’s enough to keep me coming back every year. The ‘car boot sale’ atmosphere of the past has been banished, although there are still bargains to be had, and the show is now more about motorcycling in all its forms. And I haven’t even mentioned the opportunities to have a go at off-road riding or take bikes out on test rides, the arena displays, the interviews and competitions on the main stage… 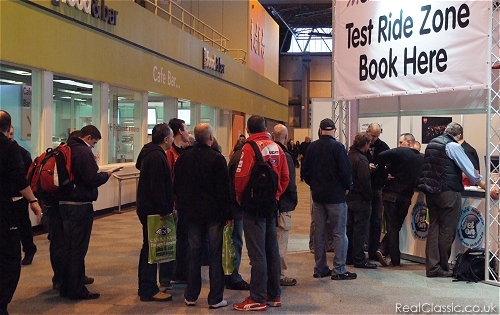 Time to get on a bike and ride…