It runs! Quick, take it to bits again! With a deadline in sight, Martin Gelder’s 1982 Moto Morini 350 Sport finally receives some much needed attention after sitting in the shed for two years…

Progress! Well, progress of a sort, at least. Two years ago, I fried my Morini’s alternator windings by trying to fit an early-model flywheel over a late-model stator, almost burning down my shed and it’s contents in the process.

This electrical mishap coincided with me taking on a contract that would prove to absorb all of my time for the next 18 months, and resurrecting the Morini took a back seat to keeping two other bikes and a car servicable. The bikes are still going, but the car had to be put out of its misery.

Over the next eighteen months very little happened to the Morini. It sat forlornly in the shed, pushed up against the wall to give the other occupants an easy path in and out. While they went on exciting foreign journeys, adventurous camping trips around the UK, invigorating blasts down the lanes and sultry bimbles on summer evenings, the Morini quietly gathered dust. And rust, but more of that later.

At the end of last year I finally retrieved the crispy alternator stator from the “helpful” colleague who had promised he would “sort it out” for me a year and a half earlier, and despatched it to Morini specialists North Leicester Motorcycles who rewound it when they said they would, for the price they quoted. Proper service. They also re-magnetised the flywheel when I went up to collect the rewound stator, and I even managed to avoid spending all my remaining cash at the spares counter. Result.

With the rewound stator and revitalised flywheel in place – and with no billowing smoke to be seen – I couldn’t resist the temptation to fire up the bike. Perhaps that’s the wrong turn of phase given what happened last time, but you get the picture.

The Morini’s valve gear is lubricated by oil mist in the rocker cover chambers dripping via purpose-designed spikes onto the rockers. The engine hadn’t run for a year and a half so while the battery was charging up I removed the rocker covers and dribbled some fresh oil in all the right places.

With the battery connected I turned the engine over a couple of times to prime the rest of the oil system, opened the reserve tap to allow petrol into the previously drained float bowls, flicked on the carb mounted choke levers, turned on the ignition (‘clunk’ goes the electric fuel tap) and gave the kickstart a measured and steady swing.

Budda-Dudda-Barrrrrrrrrrrr…. it burst straight into life and an immediate 3,000rpm tickover! Blimey; I’d expected a struggle. Knocking one of the chokes off calmed things down, and within a minute the bike was ticking over steadily (if not quietly) and contentedly at a more reasonable rate. Nothing wrong with the ignition circuit then.

Better still, the charging circuit seemed to be doing its stuff, with the voltage rising as I blipped the throttle, and all of the rest of the electrics – well, most of them; this is an Italian bike, after all – seemed to be working.

Time to make a quick list of little jobs to do before the bike could be MOT’d and put back on the road. And just to focus my mind on getting it finished, I signed up for three track sessions at the Festival of 1000 Bikes in July.

Except the little list wasn’t so little, and most of the jobs weren’t so quick. The swinging arm bushes that had been marginal last time I’d checked them were now definitely worn out. The rear master cylinder had – over the years – leaked brake fluid which had been eating away at the paint on the frame. Eighteen months in a not particularly dry shed had wreaked havoc in an area normally hidden by a handy side panel. 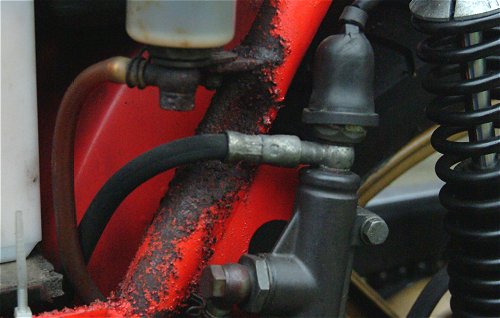 And then there were the rear shocks; ever since I’d sorted out the front end, the back of the bike had felt too low and distinctly undersprung. And while I was at it, the cover on the always slightly loose seat was dangerously slippery, there was a fair bit of rust round the edges of the mudguard… It soon became obvious that the whole of the rear end of the bike needed attention. Pass me those spanners… 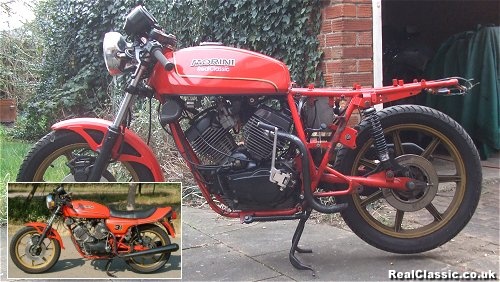 The bodywork was soon off, revealing a bike that looked much smaller and more purposeful than it did when it was wearing it’s full 1980’s afterthought tail fairing. Maybe it’s time to go for that minimalist cafe-racer look?

The rest of the strip-down was fairly straightforward, if a little grubby. And then I got to the rear cylinder’s exhaust nut.

I assumed (wrongly, I eventually found out) that the left hand exhaust pipe would have to be removed in order to get the swinging arm spindle out. The castellated-ring nut holding the pipe in place resisted all attempts at shifting it, to the point where the corners of the teeth were chipping off or the teeth themselves were folding in towards the pipe. 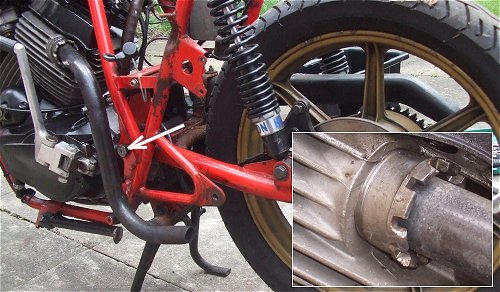 If I’d known the swinging arm spindle nut (arrowed) wasn’t a bolt head, I wouldn’t have butchered the exhaust nut quite so much…

But then closer inspection of what I thought was the bolt-head end of the spindle revealed that it was in fact a nut; perhaps the spindle was designed to be removed from the other side of the bike? Sure enough, I’d been struggling to remove a part that could – if necessary – be left in place for now. Pillock. With only minimal bloodshed, the spindle came out and the swinging arm was liberated. 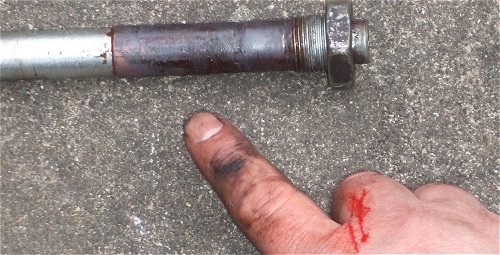 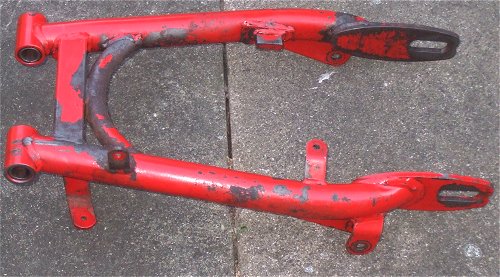 Time to sort all the bits in to various boxes and work out a plan of action to get the bike back on the road in time for the Festival of 1000 bikes.

Next time: Nylon bushes and a stainless spindle emerge from EVGuru’s shed, paint goes everywhere, and my seat and mudguard get pimped. The Festival of 1000 Bikes is on the 12/13th July, so the next installment will be with you before then. Probably…