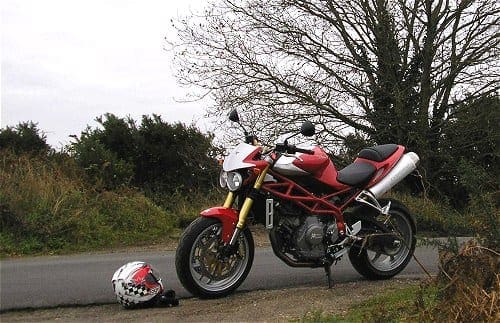 The Morini Riders’ Club were desperate to get their hands on one of the new bikes as soon as they landed in the country. David Marlow and Chris Webber rode the first Corsaro to reach the UK…

It was mid-winter when the first new Morini Corsaro touched down at the importer, Three Cross Motorcycles. Even in the dull light of the shortest day of the year it positively glowed in its red paint. This was going to be a challenge. My 25 years of motorcycling so far has been done in my sure and certain knowledge that anything more than a 350 Morini would be a waste of my abilities. The intimidation factor of a bigger bike has never appealed. So there I was with the only new Morini in the country, in late afternoon, with the roads covered in salt and grease, with probably 100bhp more than I have ever used on the road…

First problem was getting aboard. My statuesque 5’7″ is also accompanied by an inside leg of 29″, so this can be a problem with big bikes, although I find my supermoto converted Morini Kanguro no problem.

Once aboard everything looked good. The bike has nice straight bars that are well within reach and a clear set of instruments. Electric starts are a real novelty to me, but I knew that the Morini does not have a starter like most bikes. Instead you press the button once and then microchips take over and do the starting for you (you need to hold the clutch in as well).

I found the gears seemed to be changing without me realising it, and I quickly fell into the old habit of not using the clutch even though it is light. I concentrated on the road rather than the bike and, along the narrow and sometimes windy roads, the gears seemed an irrelevance. The Corsaro just goes when you twist the throttle, no hesitation, no off peak fluffing, no stuttering as though it is covering up emission requirements. It just goes like a rocket. 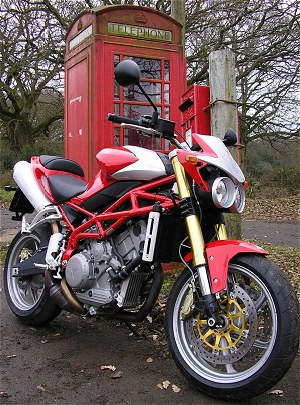 But does it still have that Morini cornering DNA, the old trump card of the 350 Sport? It became apparent that this is there in spades. Never mind that I am more used to the old scalpel-like handling of 100/90 x18 tyres; these big gumballs give good feel and turn-in even in cold conditions — they certainly gripped when I urged the bike forward and my confidence was rapidly increasing.

Ever mindful of the need to respect other road traffic I was pleased that the pipes are not overwhelmingly noisy. I didn’t notice them even without earplugs, although I am told there will be optional Termignonis available that a vast majority of people will no doubt specify, and these will liberate a further 14bhp — another 10%.

Looking into the mirrors I could see a reasonably clear view behind me with barely a hint of elbows, unlike many of the old bikes I have ridden. I was astonished that anything that I found so intimidating to read about could be so confidence inspiring so quickly in such adverse conditions. 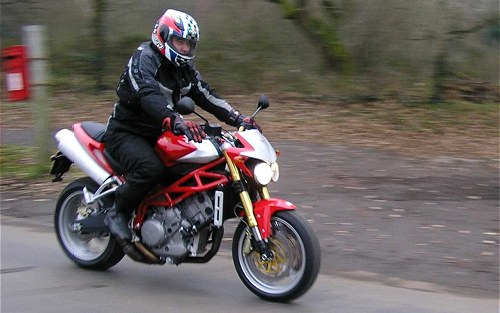 One of my biggest worries before setting out was brakes, or more specifically my ability to use ones that really work. Old Morinis have anti-lock brakes, that’s because there is almost no chance of locking them under normal conditions! Riding round Cadwell Park on a variety of much newer tackle I am quite aware of the capability of modern systems under extreme conditions, but the thought of using these on winter roads requires a certain amount of mental recalibration. Uprating the bike to radial calipers will be an option so the ones on the test machine are obviously inferred to be just a cooking option… but what brakes they are! Their ability to provide retardation and superb feel at any speed was fantastic.

When you first sit on the bike the instruments give the impression of being quite low and distant, giving the bike a very humpy, modern appearance. Riding the bike none of this is apparent and it fitted me perfectly when in the saddle and on the move. The further we went, the more the bike seemed to be part of me. After even a short acquaintance I was confident to let it go at speed, and I also spent some time trickling up and down the road. The bike felt perfectly manageable for such low speed maneuvers.

I had been anticipating this ride for a year, ever since David Marlow and I had first seen the pre-production model at the Bologna show in December 2004. The Corsaro was in pillar box red, as opposed to the black of the original. Despite the large engine, it didn’t feel overwhelming, with the ergonomics making for an easy reach to the bars, and the tank and seat both contributing to a secure riding position.

Levers, switches and pedals are well placed for a person of my build (middle aged and just under six feet!) and there is a large clear rev counter dial. However, the electronic speedometer and subsidiary instrumentation may be difficult to read in the bright sunlight. All in all, a very attractive package on the showroom floor – but how does it perform on the road?

It has been some years since my last large, modern bike so I wanted something else to ride for comparison. Three Cross came up trumps, offering to let me ride the latest Triumph Speed Triple back to back with the Morini. The Triumph was an ideal machine with which to benchmark the Morini -probably aimed at a similar market, and highly regarded by press and public alike. Both are of similar size and weight, although the Triumph is wider over the back wheel and has a more aggressive appearance. On the road both also felt remarkably similar, with little to choose between them in handling and performance.

Starting is peculiar on the Morini – neutral, clutch in, press, release the starter button – and the motor cranks the engine until it starts. Patience is required to let it idle until it warms up – no quick getaways here! For the first few miles we ran through a 40 limit. This gave an opportunity to test low speed running, first to third gear. The Morini clutch is light, gear selection crisp, no sign of notchiness, although the gear indicator is difficult to read. The engine picked up smoothly and effortlessly from low revs, much better in this respect than the Triumph I rode on the return leg. The Morini’s engine felt smooth throughout the rev range, with a relaxed and easy manner that copes well with riding in speed limits, although it took concentration to maintain a sub-thirty speed in third gear. 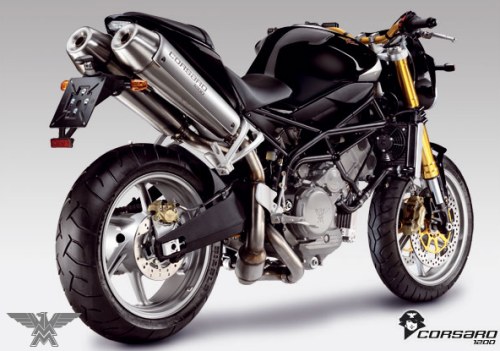 Once on the de-restricted roads the acceleration of both machines was stunning, making overtaking in any gear pure joy – and with little to choose between them. The rear view mirrors on the Corsaro are well positioned, and far more practical than the Triumph – important on a rider’s machine. Handling and suspension are superb on both, coping with manhole covers, ridges and ruts with consummate ease. The roads were greasy (although not as bad as on David’s ride) and I was wary of riding hard.

On some twisty, interesting and narrow back lanes – classic traditional Morini roads — the Corsaro’s brakes and engine braking were used to good effect. In those conditions, I would not have been able to ride as quickly on my Dart or Strada, and this machine just shot up to ludicrous speeds. Self-discipline, and the knowledge that I really do not want to wipe out the only modern Morini in England at the time, kept me upright.

In summary, Morini have produced a very impressive machine – directly comparable with a benchmark machine in the Triumph triple, with a quality of finish that matches Japanese standards (the cable and wiring routes are well thought out, with impressive detailing and an abundance of cable ties).

I feel that this first bike is superb, and not just because it has a Morini badge. It may be marketing hype, but there is a direct link between this machine and my 3½ which had innovation galore in its day (electronic black box, belt cam drive, six gears – all considered unnecessary in 1974). 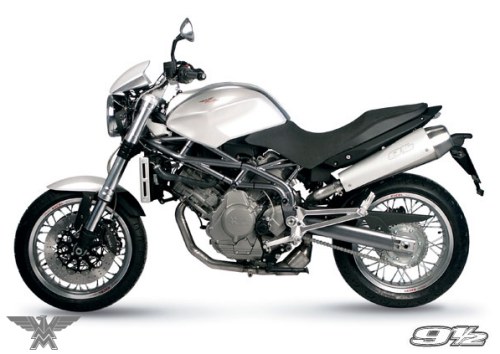 But would I buy one for £8699 OTR? First, I need to ride the 9½ – a more practical seat and softer engine – against other benchmarks to decide which suits best.

Following our rides we spent much time discussing the bike and discovered that independently we had come to almost identical conclusions. This bike is a stunning debut, and unlike most quasi-concept show offerings it looks even better as a production bike than it did on the show stand. The detailing is very good and the performance in all areas that we could measure was beyond reproach.

More than that: here is a very modern bike, designed to be used on the road and to meet all modern legislation from the start. The engine has been designed for modern production methods much as the original 3½ was, and it is this engine which dominates the whole motorcycle. It is so much more refined than the air-cooled Ducati DS as to be untrue. It also feels a lot more powerful than the KTM 950 Supermoto I rode at Cadwell earlier this year, and is a whole lot better contained in this chassis.

Chris has identified the Triumph Speed Triple as a competitor at £7845, and the MV Brutale is available at various prices between £8999 and £12,500 depending on capacity. There is also the eye catching Ducati Sport Classic at £7495, and the KTM Super Duke at £8345, but inevitably the Morini Corsaro will be compared to the Ducati Monster.

Ducati – and the rest – must be very worried about the new Morini. It moves the game onto a whole new level.