With Beezumph looming, Martin Gelder tackled his to-do list. Forks, brakes, chains, sprockets, gaskets and cam belts all needed attention. The front end, the back end, and the bitter end?

I even set myself a deadline; to get everything out of the way before Beezumph 14. And despite my best efforts, I actually made it out on track and returned with the bike in one piece. Blimey. But I’m getting ahead of myself there, and that won’t do.

The work I’d planned separated fairly neatly into three areas: The front end, the back end, and the engine (the bitter end?).

The forks on the Morini had been badly damped since I’d bought it, and one of them had recently started leaking oil. A closer than cursory inspection revealed some horrible gouge marks just under the dust cap. Grinding and re-chroming might have been an option, but Jim at Disco Volante offered to flog me a set of brand new Tarozzi pattern fork legs for about the same price as refurbishing the originals.

The forks came apart remarkably easily (there’s a very comprehensive Marzocchi manual online here) and although part of one of the damper rods was stuck in the bottom of the fork slider, there was very little sign of wear on the slider bushes.

The most difficult part of the job was wrestling with the wiring for the instruments (the idiot lights still work – or don’t work – in the same apparently random fashion after reassembly) and trying to get the clip-ons to release their grip on the stanchions. They’re a pair of cheap and fairly recent pattern parts, and I suspect that they might be designed for slightly small diameter stanchions [Makes a note to shop around for something better]. The old “penny in the gap” trick worked its magic though. 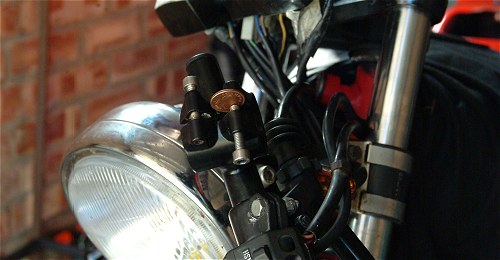 The dampers themselves are staggeringly crude; a sliding piston with two big holes in it. Now I know why RC Message Board regular Evguru is replacing his with cartridge emulator kits. The extent of the damage to the gouged slider was also a bit worrying; what had caused it, I wonder?

While the forks were off it made sense to replace the steering head bearings, which had become noticeably notchy despite the steering damper’s best efforts to mask the problem. The races looked okay if slightly scuffed, and 44 (I counted them all out, and I counted them all back in again) shiny new balls were juggled into place with the help of a lot of grease, most of which ended up on my overalls.

Before replacing the brake callipers I gave the pistons a good clean and fitted new Ferodo pads. This is where specialist dealers really come into their own; North Leicester Motorcycles translated my “I need pads that are kind of softer, with more feel” into exactly the right grade.

On the road, this work has transformed the front end. With the right amount and grade of fork oil (I went for 220cc per leg of 15W oil) and with smooth and notchless head bearings I can now feel what the front tyre is doing. The 15W oil might be a bit firm for commuting, but for fast (well, Morini-fast) riding it’s perfect. Earlier Morini 3½ Marzocchi forks may need a different quantity of thinner oil, but for my twin disc ’83 model 15W is on the stiff side of perfect, 10W would probably be on the soft side of perfect and 5W, which is what I suspect was in there initially, would be too soft.

The brakes have also got a lot more feel now. I’d planned to fit braided hoses but the pair I had (originally for a Honda VTR1000) were just a little too short. I also now know that you can’t reverse the forks to move the callipers behind the legs. That would have let me fit the braided hoses, but it left the wheel slightly off-centre and the discs interfering with the callipers. Ah well.

I had planned to fit new shocks (either longer or with stiffer springs) and a new seat (less slippery, for greater pleasure) but lack of time and funds ruled these two out.

I couldn’t put off sorting out the chain, however. When I bought the bike I inherited a spare, and brand new, chain which was the correct length on paper but a couple of links too short in practice. As I’d run out of adjustment with the chain that was on the bike, something had to be done. A dental inspection of the teeth on the sprockets confirmed that a previous owner had lowered the gearing by fitting a two-tooth larger rear sprocket. Hmmm. Before finding this out I’d convinced myself that the gearing needed lowering, but this set me thinking. A bit of work with a calculator showed that by going back to standard gearing, I’d get end up with sixth gear feeling noticeably higher, but I’d get slightly more rpm per mph in fifth than I currently had in sixth, which was what I wanted to achieve [Does this make sense? MG]. First gear would be a bit taller, but that wasn’t really a problem, and I couldn’t help feeling that Morini must have chosen the original ratios for a reason.

So on with a new pair of standard sprockets (38 and 14 teeth rather than 40 and 14) and suddenly the new chain is the right size, and I have enough movement in the adjusters to get the tension right. I was so pleased I even cleaned the rear brake calliper and pistons. 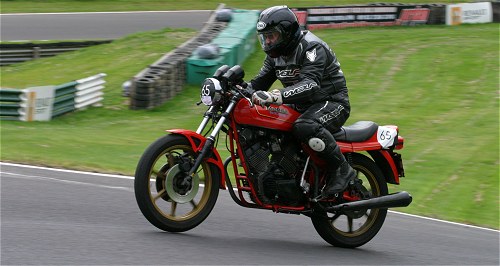 My hunch about the gearing was right. Top gear is now a motorway and dual carriageway overdrive, but fifth has become a really useful general gear with enough punch for overtaking without having to scream the engine. And because the spread between the gears has been opened out, the bike actually feels more tractable. I was really surprised how much difference this made, particularly at Cadwell Park where the gearing now seemed “right” for more corners, more of the time. Don’t believe people when they tell you that dropping the gearing will make your bike faster; for me and my Morini, the opposite was true.

Ah, the engine. Replace the rocker cover gaskets, and change the cam belt.

Well, the first one was easy enough. Morini rocker gear is lubricated by oil condensing out of the mist that makes its way up the pushrod tunnel and then dripping off spikes cast into the rocker covers. It sounds haphazard but it obviously works. In fact it’s so effective that oil was flowing in a steady stream from under my rear cylinder’s rocker cover and coating the back of the engine. New gaskets went in, and the partially stripped rocker cover retaining bolts were locktited and tightened v-e-r-y carefully. 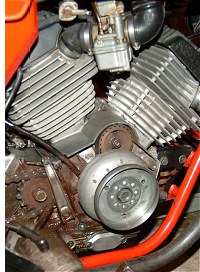 I’d already found a little bit too much play in the cam belt, so it was back on the phone to order a new belt, a puller, and the special tool to hold the alternator rotor in place.

I could have borrowed these from the Morini Riders Club, but I *like* buying special tools. I can see myself at some point in the future buying an R100 BMW to go with the exhaust nut spanner and clutch centering tool that have been knocking round in my toolbox unused for a decade…

Changing the cam belt should have been a simple job; remove the alternator centre bolt and spring washer, screw the puller in till it’s snug, tighten its centre bolt, and off pops the rotor.

I expected a few gentle taps of the nylon mallet might be involved at some point, but I didn’t expect what actually happened. As I began to screw the centre bolt in I felt a slight resistance, and then gentle outward movement of the puller. This was easy.

A few more turns on the centre bolt and… Out popped the puller, along with half the threads from the middle of my alternator rotor!

This had just become a major job and, with Beezumph in two days time, one that would have to be delayed until the next gripping (or not, going by the state of those threads) instalment…