Martin Gelder gets a bit carried away at his first classic track-day. As does his Moto Morini Three-and-a-half. On a trailer. Oh dear…

I’m lying prone on the bike, my chest and stomach flattened against the tank, elbows, knees and ankles tucked in tight, throttle hand straining to pull the carburettor slides as wide open as they will go. The bike in front of me on the straight is too far ahead for me to feel any slipstream effect so I’m waiting for the “3-2-1” countdown boards that mark the braking area for Park bend. By keeping the throttle pinned until I’m past the final board I can start to claw back the gap that has opened up between myself and the bike in front over the last half a lap. I can shave off a fraction of a second through Park and Chris, if I get the Gooseneck right there’s another couple of tenths to be saved, and I’ll be right on him going into the Mansfield downhill lefthander.

The reason I’m laughing out loud? I’ve just glanced down at the clocks to catch the tacho needle swinging past 9,000 rpm as I change up, and I’ve seen how fast we’re going. One hundred and twenty kilometres per hour. Seventy five good, honest British emm-pee-aitches. In my mind I’m Hailwood closing on Read, Hislop catching Foggy, Rossi about to pass Gibernau. In reality, I’d gone faster up the A1M coming home from the LMM ride-in last week. Welcome to track-days, Morini style. 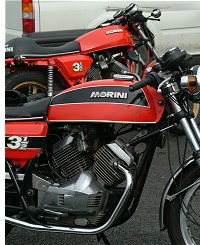 Assemble at the Golfer’s Arm on Thursday evening, more track time than you can shake a grazed footpeg at on Friday, and then an AGM, barbecue and prizes for the best bikes on Saturday.

As a former track-day addict (you’re never completely cured) with a Morini in the shed, how could I resist?

I borrowed a trailer (which is another story, coming soon) from David A. of message-board and mad-goose fame (cheers, David!) for the trip to Cadwell, reasoning that there was a fair chance of something on the bike going pop before the weekend was out if the track-scratching devil dancing on my left shoulder managed to overwhelm the angel of mechanical sympathy perched quietly on my right. A wise precaution, as it turned out, but not for the reason I expected.

Lack of time in the run up to the big day meant that my three-and-a-half got little more than a check of vital fluids and a wipe down with an oily rag before the off. There was nothing wrong with the bike as such, but to my double-overhead-cam ears those pushrods and tappets sounded very rattly unless I wore ear-plugs. Solution: wear ear-plugs. It was very reassuring to hear more than a dozen or so equally rattly Morinis fire up on Friday morning; comparing rattles and leaks is as good an argument as any for joining a one-make club.

The majority of the Morinis present were 3½s , but there were also more Darts than I’d ever seen previously, as well as a sprinkling of 500s; a good turn-out for an obscure Italian marque whose heyday was twenty or thirty years ago. With signing-on, scrutineering and the briefing out of the way, it was out onto the track for the sighting laps and first session. Three laps following a Bimota SB8R ‘pace bike’ got us up to speed, and then we were on our own. 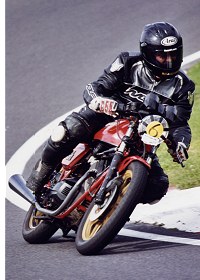 I thought I knew Cadwell Park. I’ve done a race school there, as well as a couple of track-days a few years back. Go careful through the Gooseneck and Mansfield, make sure to line up right for the jump at the top of the Mountain, take it easy through the fiddly bit in the woods, nail it down the straight then roll off through coppice and Charlies before carving round Park and Chris. Simple. Except on a Morini, there are a lot more uphill bits, the straights are much longer and most of the corners are straights as well. Every time I backed off before leaning into a bend, a chasing Morini would clatter past. Halfway down the straights, it’d be two – one on each side, typically. When the chequered flag came out I decided I needed to have a rethink.

Session two saw me re-learning the track the Morini way; preserving momentum at all costs and riding the circuit as it unfolded in front of me rather than how I’d learned it on bigger bikes. Now I was having fun, listening to what the bike was telling me and exploring its abilities. Ignore the hard-learned braking markers, feel for grip from the tyres and l-e-a-n… I was still getting passed on the straights though. Don’t get me wrong; I expected the Darts and 500s to come past, and I know I’m not *actually* Valentino Rossi, but still… The penny dropped while I was following another rider out of the hairpin on the final lap of the session; I was changing up much too early. If everyone else’s twenty or thirty year old push-rod engines could take it, so could mine. According to the manual the 3½ engine is rated as safe to 9,200 rpm while I was snicking up a gear at the 8,500 rpm redline. There was only one thing for it; redline be damned, nine grand here I come. 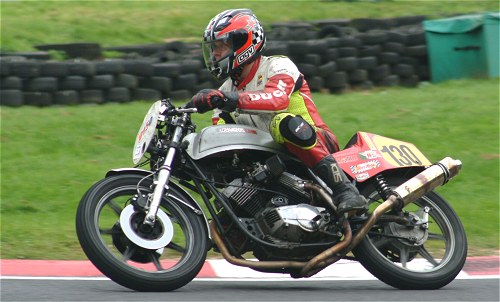 Finally, in session three, everything clicked. That extra 500 rpm made all the difference running up through the gears and I could tuck in behind other bikes and keep up with them. And the Morini seemed to revel in it. Pistons didn’t come up through the petrol tank to say hello, con-rods didn’t make a bid for freedom through the crankcases, and valve heads didn’t part company from their stems. It almost felt like it was telling me that this is what it was built for, and that I finally understood something really important… 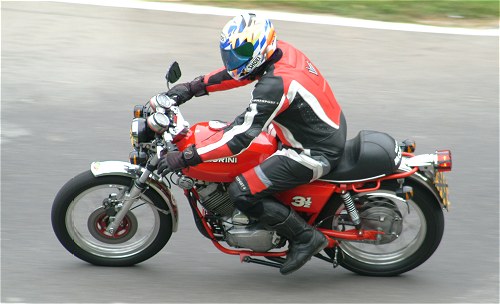 …and then I saw how “fast” we were going, and the ridiculousness of it all hit me. I was riding my socks off round a race track, and I was barely breaking the speed limit. I had to laugh – I couldn’t help it. But man, was I having fun. Hard on the brakes at the end of the straight (five days later my right hand still aches slightly from the effort I was using) through the double right and the gooseneck, hard on the brakes again into Mansfield, closing, closing all the way through to the fiddly chicane, squirt down the straight to the left-right at the bottom of the mountain… Where I ran wide. Idiot. By the time I’d crested the climb, he was into the woods. Pressing on, the bike shimmied again as I tried to hustle through Hall Bends; something was wrong. Had the engine let go, spraying oil all over the rear tyre? Had my worst fears been realised? Was I littering the track with shards of irreplaceable engine internals?

What a drama queen; just a common or garden rear tyre puncture. A tiny off-cut of stainless steel wire had punctured the tyre and torn the inner tube, deflating the tyre in less than a hundred yards. The end of my trackday, but I came home with a new respect for the engineers that designed and built the little 72 degree vees. I’d learned a new way to ride, and my head was buzzing with modifications and ideas. That steering damper will have to go, and I really do need to sort out some heavier fork oil, and if I junk the starter and fit a smaller battery I could save a lot of weight, and if I can make the seat a bit lower, and maybe find some longer shock absorbers, and maybe lower the overall gearing to bring the gears closer together, and….