It rattles, it squeaks, it bounces, it’s uncomfortable, its electrics are iffy – but it’s loud, it’s red, it’s Italian, and it’s just what the doctor ordered. Martin Gelder exchanges real cash for a real classic…

Choke flipped off, throttle blipped, quick nod to the previous owner who smiles encouragingly, clutch in, first gear engaged with a wrong footed clunk, dry clutch eased out with revs held high to avoid an embarrassing stall, and we’re off in search of the A1M.

Yes, I’ve bought myself a Morini. It’s an ’83 3½ Sport; a later model than I’d hoped for but well within budget and in good enough condition to be ridden the 60 miles home from London. The seller seemed like a nice bloke, the bike came with a bit of history and had been used regularly, and the reason for sale seemed pretty genuine. I broke half the rules we recommend when buying an old clunker, but do as we say, not as we do, okay?

Which is how I found myself buzzing up the A1M out of London, feet on the pillion pegs and head hunkered down into the breeze, torn between letting the surprisingly revvy motor howl towards the redline or settling for mechanical caution and 65 miles an hour. 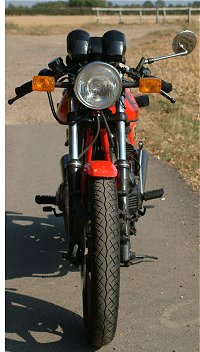 The first five miles of the journey were through unfamiliar surburbia and had me wrestling with the right (wrong) sided gearlever and grabby clutch. Onto dual carriageway and the bizarre riding position caught up with me as I found myself shuffling further and further forward up the seat and onto the tank in an effort to get comfortable.

With feet finally settled happily on the pillion pegs, my mind turned to the twenty year old bits of metal flailing around between my legs. While the bike felt happier the nearer it got to the red-line, the higher it revved the more I worried about the state of the oil and the tightness of every single nut and bolt.

Even through ear plugs and full face helmet the Morini was producing a cacophony of conflicting noises and vibrations; sensory overload to the point of distraction. Only one thing for it; take the twisty route home and force myself to concentrate on the riding rather than the bike.

An hour or so later I’m crouched on the patio listening to the tick-tick as hot metal cools and trying to absorb every detail of the bike I’ve just bought. I’d looked hard before I bought it, but now I was thinking about improvement rather than trying to avoid buying a pup. The ride home had shown that while there was nothing fundamentally wrong the Mornini would need a thorough front-to-back service and tidy: The front brakes squeaked and squealed, the forks seemed to be dangerously undamped, the clip-ons were at different heights and angles, one of the sidepanels was making a bid for freedom, the clutch pulsed and grabbed, there were spots of corrosion on the black chrome (black chrome – how 1983 is that?) silencers and most of the other paintwork, only one of the idiot lights worked, the electric starter made a great noise but didn’t even try and turn the engine over, and was that a fresh stain on the driveway beneath the oil pressure switch? 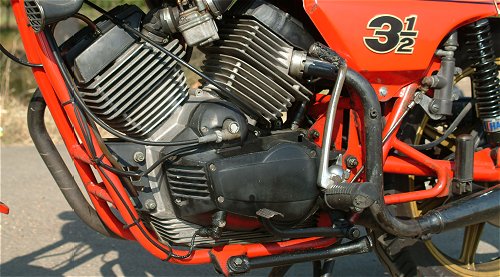 Quite a list, but I didn’t care. In fact, I was positively looking forward to getting stuck in. The ride home had convinced me that I’d made a good choice; the last time I’d ridden with the same intensity was on a race track and at speeds that just can’t be maintained on public roads. The Morini was producing the same sensations – and making the same demands – while staying at least within sight of the national limit. And all the time that it was rattling and squealing and bouncing about underneath me, I could feel the potential waiting to be released.

Underneath the ill-fitting bodywork, behind the huge indicators and hidden by the interesting front suspension is a thoroughbred Italian sporting lightweight. It’s in there somewhere, and over the winter I’ll be trying to tease it out and make the most of it. Overhaul the engine to make sure nothing is about to let go spectacularly, fix the most obvious niggles, and then get the cycle parts set up so that I can make the most of that glorious little motor. 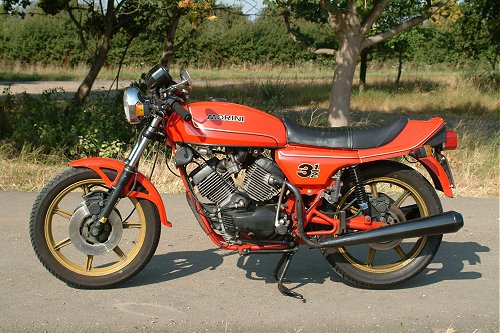 But before any of that, the riding position will have to change. Oh dear me, the riding position. The main reason I was squatting on the patio going through all this contemplation was because I didn’t feel confident to straighten my spine too quickly. The combination of downward sloping clip-ons and forward set footpegs is not only crippling, it makes the bike difficult to steer accurately, makes the gears awkward to shift and renders the back brake pretty much useless. The latter two aren’t helped by my reflexes having developed over twenty seven years of left foot shifting, but the contortions necessary to sit on the Morini at the moment tend to leave me in no doubt as to which bike I’m riding. 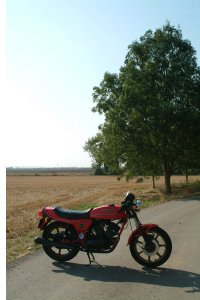 So first things first then; a mechanical check over and a set of rearsets should let me begin my search for the 3½’s inner Morini-ness….


People to talk to: