Martin Gelder goes back to the seventies (inevitably) to explain why his personal idea of a Real Classic Motorcycle is small, Italian and has “Three and a Half” written on the side…

This is a story that begins a long, long time ago and in a land far, far away. Travel back with me to the mid nineteen seventies, where a young and spotty RealMart is in the Liverpool branch of WH Smiths shopping for a magazine to read on the train ride home.

Railway Modeller (a magazine which, incidentally, appears to have changed not one iota over the last thirty years) had lost its appeal a couple of years earlier with the arrival of puberty, and I was too embarrassed to even think about reaching for one of the – ahem – “top shelf” titles which covered my other main interest in their pictorial but air-brushed pages.

I’d bought a moped a few weeks earlier, so I was – obviously, at the age of sixteen – already an excellent rider and extremely skilled mechanic; after all, I hadn’t run out of petrol once since the first day, and had only fallen off twice. The Honda was only ever going to be a stop-gap measure until I was seventeen and could drive my mum’s Mini, but I was surprised at how much I enjoyed bowling along at 30mph, mastering the power of my PF50 as I leaned through sweeping bends with the bitter February wind flapping my flares and the dank Wirral air misting up my aviator style glasses.

So I bought my first motorcycle magazine. Not something which is normally considered a rite-of-passage, but I think it marked the point where what had been just a means of transport began to turn in to a life-long passion. And it wasn’t even a particularly good motorcycle magazine; from memory New Motorcycling Monthly scored highly on bright colours and big headlines but had little of scintillating interest filling its pages. There might have been an article on adjusting the tappets on a CD175 and perhaps a comparison of the various fibreglass panniers on the market, all written by a man called Cyril and a short woman with bad hair, but I can’t honestly recall. I’d picked the magazine at random, to be honest, just to see what motorbike magazines were all about.

What I do remember is that there were two road tests in that particular issue of NMM, and I think those two motorcycles allowed me to define the edges of my understanding of motorcycling. One of those bikes was the Honda Goldwing. Very fast, very powerful, very big and very heavy. But also very ugly to my eyes and with little to compare the numbers against, that was what mattered. It looked wrong. My motorcycling experience up to that point was bounded by my Honda moped, my mate Pete’s NSU Quickly, Airfix kits of Honda’s 450 and BSA’s C15, a vague knowledge of generic Harley Davidsons, and the odd FS1E seen in town.

The other bike tested in the magazine was a Morini 3½ Sport. Now this was more like it. It was red, it had an engine that looked like a motorbike engine, the curves of the fuel tank flowed through into the curves of the seat, it had “Sport” in its name, and it was Italian and thus Exotic as well as Exclusive. These things are important when you are a sixteen year old boy living in world where everything is reduced to black and white facts. Japanese bikes were cheap and nasty, British bikes were oily and unreliable, Italian bikes were unknown and therefore fascinating.

That “3½ Sport” name was rubbish though. Everyone knows that a proper name for such a bike would be “350 Sport”.

But the seed was planted. It would be another three or four years before I actually saw a Morini in the metal, and as a succession of Kawasakis, Guzzis and BMWs passed through my hands over the next two and a half decades my definition of motorcycling drifted away from its formative roots.

Which brings us to the present day. I’m much older, arguably wiser and certainly heavier than I was then, less spotty but alas less hirsute. The Honda PF50 missile in the shed has turned into a “sensible” 160mph Yamaha but best all, Double Maths on Friday mornings has turned into working from home writing about motorbikes. And it’s while working on this site that The Coincidences have begun.

It started with Rowena’s Morini profile, and then spread to the Ace CafÃ© Italian day, before following me halfway up the A1 to Knebworth. Little Italian v-twins were cropping up everywhere I went. Then one of my friends bought one, surprisingly cheaply. Not that I’d been lurking round eBay, seeing what was available out there, of course. Ahem. 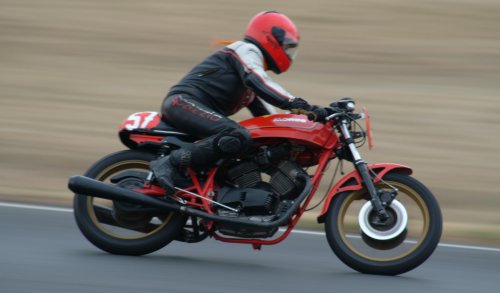 The last straw was going to a world endurance race for a weekend of reporting on the latest two wheeled technology being pushed to its limits (and then pushed back to the pits to be put back together again). Sure enough, in a classic race field packed with Gold Stars, Manxes and NSUs, there was a 3½ Sport…

But what to buy? Well, let’s start by deciding what I’m not going to buy. Not a Kanguro or Camel because I want a roadster rather than a trail style machine. And not one of the Excalibur or New York cruisers. Shudder. Which also rules out the Dart – too busy trying to be something it’s not – and the later model 350K2s with the nose fairing and swoopy bodywork. A 500 would be a possibility, but only if I can’t find the right 350, and I’ll consider a 350 Strada if I can’t find a decent Sport. 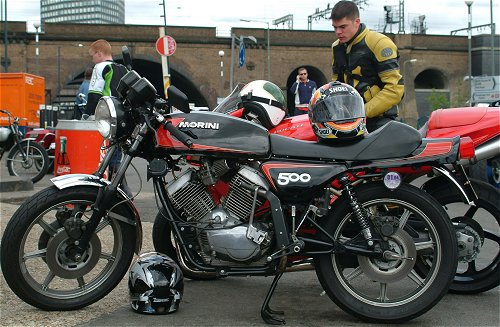 Received wisdom has it that the 1976 model with wire wheels and a single front disc is the one to go for, but if I’d been buying one at the time I’d have wanted cast wheels – hot stuff in 1976, as any sixteen year old boy could have told you. And at least one disc brake. I’ve never been a fan of big drums; go for a ride on a bike with a huge multiple leading-shoe drum and the owner will always tell you to “go easy with the brake because it’s a bit fierce”. Invariably, this means pulling the lever will have no effect whatsoever until the wheel suddenly locks with no warning – and then when you return with a white face and shaking hands there’s always an excuse about it “needing a bit of adjustment” or being “a bit tricky to set up”…

Cast wheels and discs would be preferable, as you can no doubt tell. Price is also a factor, and I’d rather pay less for a later model than pay over the odds for an earlier but less sound example.

What about prices? Well, you could pay over £3,500 for a fully restored very early drum braked Sport. Maybe you could; I couldn’t. Or you can find later but scruffier examples for a lot less than that, and I think that’s where I’ll be concentrating my search.

Well, I’ve as already mentioned I’ve had an eye on eBay for a while now, and I’ve been browsing marque specialists North Leicester Motorcycles’ website with just the tiniest amount of drool coming out of my mouth. I’ve joined the Morini Riders’ Club, and perhaps most importantly of all I’ve spread the word amongst other Morini owners that I know…

This is only the beginning… 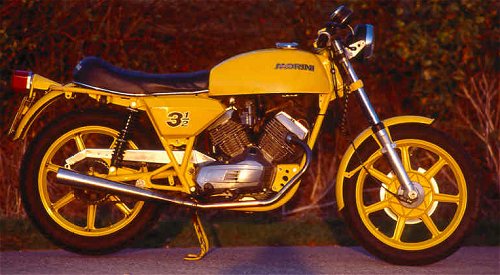 And what of New Motorcycling Monthly? Well the next two-wheeler mag I bought was a copy of Bike; Mark Williams, Egli Kawasakis, Uncle Bunt and Ogri when he was funny… Much more like it.