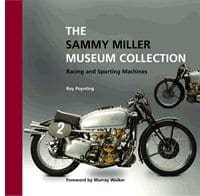 If you enjoy drooling over exotic racing motorcycles, then this book captures the gems of the Miller Museum between its covers, and does them ultimate justice with glorious presentation…

Redline Books, who’ve produced this 228-page softback, really know how to publish beautiful books about motorcycles. Honestly, the subject matter could be scruffy old Bantams and battered Benlys and this book would still look gorgeous, it’s so well put together.

Full colour throughout, beautifully designed, delicious photography… and, of course, this tome isn’t about nasty little scrappers in the slightest. It’s about some of the most remarkable motorcycles which have ever turned a wheel.

Effectively, this book is a whistlestop tour of the Miller Museum, representing the highlights of Sammy’s competition collection between its covers. It presents a mini-profile of over a hundred classic bikes, some of which are unusual production models that took to the track during their lifetimes. The majority, however, are one-off works racing machines which have been restored to the full glory of their competition trim.

I would have liked the text for each entry to be a little longer; author Roy Poynting has written full length articles about many of these bikes but we only get a half page of information. For that reason this book is one of those which you tend to dip in and out of, rather than one which rewards reading from cover to cover. The contents are ordered rather oddly, too. I couldn’t figure out why a 1939 V4 AJS came ahead of a 1912 Humber, or why the bikes aren’t grouped together by marque. There’s no index, so if you are looking for information about one particular model (which I often am, of course), then you have to scout through the whole book to find it.

The Miller Museum does not confine itself to only British bikes nor vintage ones. The range of racing motorcycles represented in this book spans most well known marques from across the continents. Thus the 1957 Parilla rubs shoulders with a 1978 Ducati 900SS while a 1980 KR500 Kawasaki keeps company with a 1977 ISDT Jawa. All the big British marques are present and correct, including many rarities like the Lowboy Norton from 1960, the Earles-forked 250cc DOHC BSA MC1 built in 1954 and the awesome AJS supercharged V4 racer which appeared briefly in the late 1930s.

In all, this book contains over 400 photos and a foreword by Murray Walker. Even the front cover is intelligently designed, forming a flap to mark your page as you flick back and forth among the exotica. It’s priced at the higher end of the range – you’d normally expect a 20 quid book to be a hardback — but pop along to the museum in Hampshire and you can save £5 on copies from the Museum shop.

If your interest in classic and vintage racing motorcycles runs to a rather more detailed and in-depth discussion of their merits, history and development then you may well do better to look at the other books in Redline’s formidable array of titles; Mick Walker has produced several which cover the subject in more detail. This publication offers a snapshot about each featured machine – perfect if you want to browse around the Miller Museum but live too far away to visit.

‘The Sammy Miller Museum Collection: Racing and Sporting Machines’ by Roy Poynting is published by Redline Books, ISBN-10: 0955527805. Available from Amazon, normally at less than the RRP of £19.99.