A quarter of a century ago, Gerry Atric started a restoration project on a 500cc Royal Enfield twin. And was ably assisted by… a muppet…

So I’d acquired a vehicle suitable for restoration (or a pile of scrap, according to your viewpoint), and the next step was to examine each item and plan the renovation.

Firstly I examined the wheels and hubs. Someone had been there before me because the front hub had been overhauled and sported a new brake lining, while the rear brake drum, sprocket, rubber cush drive and brake shoes were all brand new – but all fitted into scruffy 19-inch rims.

The condition of the rims was academic since the investigation by the Royal Enfield Owners’ Club (they have the original factory registers) showed that the frame was from a burgundy red Meteor Minor 500 twin, despatched to Pascalls of Guildford on 17th April 1958 – while the engine was from a blue Meteor Minor Sports despatched to Fosters of Parkstone on the 28th April 1960. 500cc bikes wore 17-inch wheels while the larger engined models sported 19-inch items.

The answer came from Alan Foster who ran a wheel building business in Leigh on Sea. He used to build competition wheels for Greeves works bikes and he was GOOD. New Dunlop WM2 rims are rarer than rocking horse manure so, as I wanted the bike for road use, Alan used Italian WM2 rims which look right but will not cause too much consternation should I have a close encounter and turn them into scrap metal! I intended to keep a look out for a decent pair of Dunlop rims for show use.

The 496cc Meteor Minor displaced Enfield’s old 500 Twin which was dropped at the end of 1958. It was initially offered in two versions, a stingy standard and a better equipped De Luxe. A pretty bike which was billed as ‘a 500 that handles like a 250’, it was conceived very much in line with the new Crusader, with oversquare cylinder dimensions identical to the latter at 70 x 64.5. This was an almost exact short-stroke reverse of the old Twin’s 64 x 77.

The motor was fitted into a frame that is easily mistaken for the Crusader’s – but although the works had fitted a prototype Meteor Minor engine into the Crusader frame, it proved too tight a squeeze, and the new 500’s production chassis was instead a suitably modified version of the 1956 all-welded Bullet frame, as also found on the 700 twins. It had two mounting lugs at the front against the singles’ one, and a bifurcated headsteady. The 500 also had a new two-way damped front fork.’

Back to The Plot…

The frame had been painted a non-standard metallic blue, apparently with a garden spray. It needed new swinging arm bushes but careful measuring with datum points and string suggested it was true. Bead-blasting and black stove-enamelling were prescribed.

The rear mudguard, although it was originally from a much earlier Royal Enfield model, turned out to be of the right pattern and mated up to the mounting frame perfectly. It was pretty rusty and there were no holes in it. I judged that bead-blasting followed by careful filling and spraying would do the trick, and so it proved. There was no front mudguard to worry about at this stage. 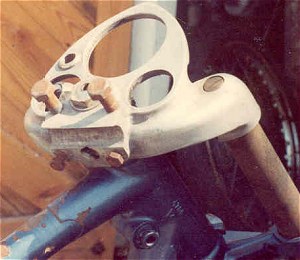 The next problem was the casquette. This is a magnificent, complex alloy casting which mounts the headlamp, speedometer, ammeter and light switch. For good measure the tops of the front fork legs screw into the base. Mine looked awful, as only corroded alloy can. It had two huge pieces broken out of the headlamp rim area, and two cracks in the back of the casting. It looked a lot better after bead-blasting but the holes and cracks hadn’t gone away!

The someone pointed me in the direction of the local boatbuilder and told me to ask for ‘Animal’. Muppet fans will understand when I say that the nickname was more than justified but his appearance belied his skill with an argon arc torch. Animal lovingly built up the holes, layer by layer, then opened out and filled the cracks and refused a single penny for his services. A weekend’s work with a file and some cardboard templates and I had a casquette as good as new.

With the wheels rebuilt and bead-blasting and stove enamelling complete, it was time to turn my attention to the engine and the tracing and acquisition of the missing parts… 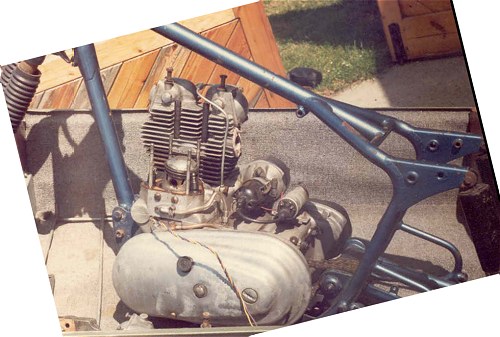