Motorcycling and music fit together as well as grease and grit, says Frank Westworth. Possibly…

I was unable to avoid overhearing a conversation the other day. Some folk do talk terrible loud, turning all of us into unwilling eavesdroppers.

Too often it’s deliberate. Folk declaim loudly in the full knowledge that the person they’re talking about but who is not invited to join the conversation will hear it anyway. This is quite rude. And only occasionally entertaining.

‘They’re built in bloody Thailand. They’re just a fake.’ A man, possibly a nice man, it was difficult to tell, was discussing a modern Triumph Bonneville. The owner was within earshot, and may even have known the experts sharing the loud debate, but if so he showed no sign of it.

‘What do you reckon, Frank? You don’t like them, do you!’ An invitation to join two strangers in a strange conversation being rude about another stranger’s motorcycle. How quaint. I smiled grimly, waved companionably and walked on.

We’re not alone in this snobbishness, us classic motorcyclists. Oh no. At the risk of incurring ridicule, I shall reveal that my passion for motorcycles is complimented by a similar passion for music. And a similar interest in the instruments which make the music; in particular and in my case in the guitar … preferably the electric guitar.

In the same way that I prefer Norton motorcycles to Triumph motorcycles, I prefer Fender guitars to Gibson guitars. And of course although I prefer to ride my Nortons and play with my Fenders, I do of course also posses both Triumphs and a Gibson, so my preference is not just a projected fantasy. The two worlds are oddly similar. 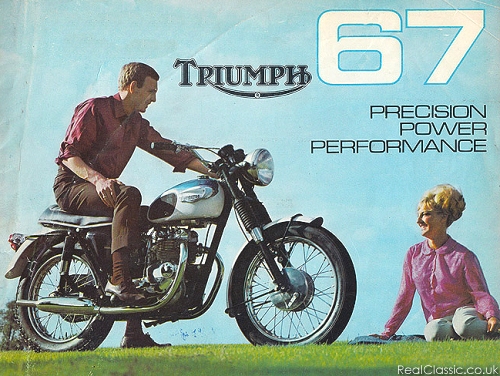 Can you spot my subtle device connecting the 1967 Fender Stratocaster to the 1967 Triumph Bonneville? Good.

The guitar I actually play, every single day and sometimes very loudly indeed, is a 2007 Fender Stratocaster. I am a man of imaginative leanings, as you can see. And I am about to devastate your outrage (‘Why is this fool discussing guitars on a website about motorcycles!’ screams Outraged of Faversham) by stretching the analogy further. The 2007 Fender Stratocaster is a better guitar in every way than the 1967 model. It is faster. Its electrics work flawlessly (elderly guitar electrics are as skilled at plunging their players into sudden silence as elderly motorcycle electrics are at plunging their riders into sudden darkness). It handles better and its dynamic abilities far exceed my own.

The 1967 Triumph Bonneville is, I am certain, a glorious and doubtless iconic motorcycle. I doubt that there are as many of them left in this green and pleasant as there are 1967 Stratocasters, but I could be wrong. The 2007 Triumph Bonneville is a better motorcycle in every way than the 1967 model. It is faster. Its electrics work flawlessly. It handles better and its dynamic abilities far exceed my own.

Whenever I reveal to fellow mad axemen that I possess a 1967 Stratocaster, tones are hushed and reverence commences. But when I also reveal that I much prefer the 2007 model they begin to look at me as though I am an idiot who should immediately and at once be banned from the Stratocaster Appreciation Dept. They always and inevitably ask me where the 2007 guitar was built. ‘Korea’ I tell them, because that is true. Fender guitars are built in Korea, in Japan, in Mexico and in the USA. I don’t care where it was built. I care that it plays awesomely staggering brilliantly well. It makes a fat-fingered buffoon like me sound excellent. The 1967 Stratocaster requires much more effort. It requires understanding and concentration, application and maintenance; exactly like the 1967 Bonneville.

The 1967 Stratocaster lives in an armoured case behind barbed wire gun emplacements because it is worth a small fortune (possibly even more than a 1967 Bonneville). The 2007 Stratocaster leans on a stand so I can pick it up and play it every single day, several times a day. Because I love playing it. I care not where it was made, nor the race, colour nor religion of the persons who operate the machines which churned it out along with thousands like it.

But here’s the thing. I have a 1975 Norton Commando. It is possibly as great a motorcycle as a 1967 Triumph Bonneville; I am a poor judge of these things. I also have a 2010 Norton Commando, which is better in every measurable way, and was built in the UK, as was the 1975 version. I prefer riding the 1975 Commando to the 2010 Commando. The 2010 Commando lives under an expensive cover while the 1975 Commando sits charged and fuelled, waiting for me to hop on and clear off. Other riders endlessly ask me why I’m not riding the 2010 Commando. I smile away their questions; ‘Because I’m not’ too easily sounds dismissive.

I was unable to avoid overhearing a conversation the other day. Some folk do talk terrible loud, turning all of us into unwilling eavesdroppers. ‘Commando electric start? That’s a joke. They never work.’ I thumbed the little green button, fired up the 1975 Commando and cleared off. Ignorance is bliss.