Just imagine: you buy a raffle ticket and then you win the classic bike of your dreams. But can it ever live up to them? BikerMarc says yes, it can…

Being a cynical old chap I rarely bought raffle tickets on the basis that the devil really looks after his own but strange things happen at sea and even stranger ones on dry land. If you believe in serendipity this is a fine example of it.

I had bought a 90% complete basketcase Model 30, which had turned out to be about 50% complete — been there, done that, still don’t learn! I had recently joined the AJS&MOC in the hope of benefiting greatly from their help and expertise in getting some sense out of the pile of rust I had invested in.

I went to the Stoneleigh Show in 2001 in search of useful bits for my P&J-to-be and had just spent nearly all my pocket money on a grease burger and a coffee. As I passed the AJS&MOC stand I saw a friendly looking chap (they all are!) so I decided to gain his views on plated chaincases (love ’em or loath ’em: it’s my bike!). He was very frank and said, rightly in my view, that there was a need to individualise one’s primary form of transport in those days so whatever I felt like doing was OK. He was not a purist and realised I was not a trailer-in concours fiend!

A pleasant chat ensued and he then said, en passant, did I have an AJS&MOC calendar? To which I replied no. He then asked if I wanted to buy one, waving it under my nose with acres of AMC pornography catching my eye. I succumbed and gave him a fiver; he then asked did I want change or raffle tickets? I went for the raffle tickets and thought; ‘Snowball’s in Hell, but it’s a good cause.’

One evening a few weeks later I was into some intensive hernia inducement in my shed when SWMBO knocked on the door and said; ‘There’s a bloke on the phone from the AJS club wants to speak to you.’

I said; ‘It’s probably about some parts I ordered; tell him I’ll call in the morning.’

Off she goes and comes back and says; ‘He really wants to speak to you.’

‘Just tell him I’ll call him in the morning…’

Off she goes and comes back. ‘He says he wants to speak to you because you’ve won the raffle bike!’

Being the grumpy old git that I am I said; ‘Just tell Steve’ (the swine who tucked me in to my basketcase) ‘to stop messing about and that I do not think it is funny.’

Off goes Memsahib and moments later comes back saying; ‘It IS the AJS Club, you HAVE won the bike and he DOES want to talk to you.’ 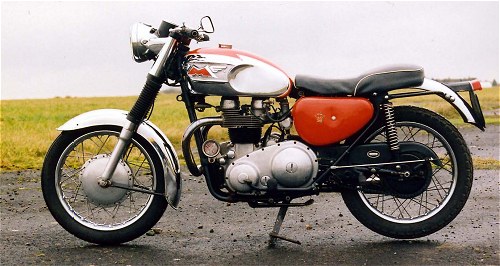 My flabber was ghasted. I have the habit of not seeing my investments produce any dividends so this was a real first (apart from the Cadbury’s coffee pot set that I won in 1963 and sold to my Mum so I could put some juice in my Fanny B). 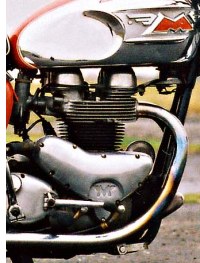 I went with G3CAL and the Mini Monster to pick up my prize and the Blessed Ernie (Chairman of the AMC Club) showed me around it. I could not believe it even at that stage. It was beautiful, my very own G12 CSR.

The G12 CSR is the AMC 650 sports twin built between 1958 and 1966; named the Monarch for the Matchless marque while the AJS Model 31 CSR was called the Hurricane (see RC07 for a full feature on the AJS version).

My prize CSR went into the works van (RIP) and we set off home full of boyish excitement. Started it straight away and went for my very first blat around the hills – oh, joy of joys. It never fails to amaze me how much pleasure can be gained from a pile of steel and alloy. 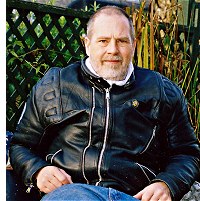 Even so, it wasn’t quite perfect. Tickover was impossible to achieve and it was determined that the slide was shot. A new Monobloc from Surrey Motorcycles arrived to spec and was a simple ‘bolt on and go’ solution.

No serious fettling was required for the next few months, just a lot of strokes and polishing to keep both me and her sweet. Then a trip to Kemble for the Classic Show ended in disaster. One mile from home and on one of the steepest hills in the area – the mag packed up!

When faced with this situation do you turn it downhill and hope that the momentum will breathe life back into the shot windings? Or do you push it the last mile to the safety of the shed? Being of a certain age I pushed it home – I was impressed by the level of my cardiovascular fitness, although I was waiting for the chest pains after every step!

A new mag from CMES and an amazing amount of faffing trying to get the timing set (the mag rotates while you tighten nut on drive – every time!) got the machine back on the road and running a dream. Many thanks to CMES for a real gem.

Since then it’s had three MoTs and every time gets the same comment; ‘your front wheel bearing is singing, get it done before next time.’ That front bearing now replaced, the rear bearing likewise, it’s had new rear shocks for cosmetic reasons only and she is nearly in top form apart from a continuous chain case leak… and now a cylinder base gasket leak.

Perhaps the only downside to the G12 isn’t specific to this or any Matchie, but seems to afflict all big British bikes. Vibration. Although I can cope with it, bits do tend to shake free and fall off with great regularity; mirrors, tool box covers (found by a miracle after a visit to Bill Little’s open day), oil caps – resulting in wet thigh syndrome! 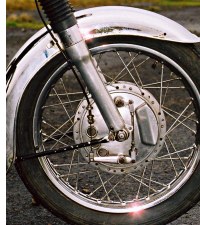 But that’s more than compensated for by the bike’s positive points. The best things about it are its stunning good looks: lots of chrome and sexy red paint, second only to a US style Interceptor (lust, drool, etc).

After that comes sheer grunt. When properly fettled she runs sweetly with lots of power in hand.

Then handling; I had an Atlas in my youth and my Matchie is tighter and more predictable, and that 2LS Norton front stopper is better than any other brake I have had.

On my regular jaunts I tend to pick villages with high walls either side of the road just to hear the mega roar from the pipes. When we stop in tourist traps we get admiring looks and people coming up to us – I think they like the bike as well.

So am I a lucky man? Yes indeedy, and I still buy AJS&MOC raffle tickets by the handful, in the hope that lightning sometimes strikes twice in the same place. Thanks to the AJS&MOC for providing great prizes – I will keep buying tickets in the hope that I will need a bigger shed soon.

Would I part with her? No, not even to FW for his more than generous offer of £100… 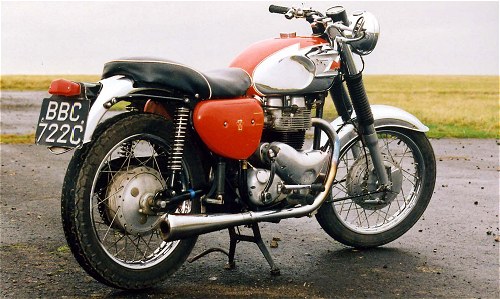