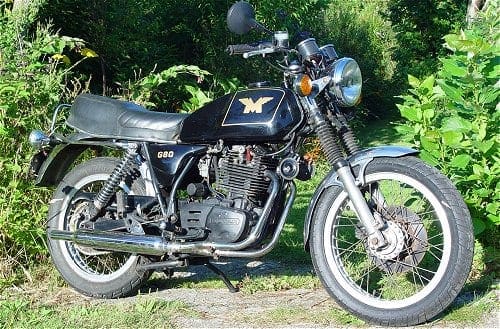 People scoffed at the Harris Matchless when it was launched, and 15 years later some folk are still scoffing. But, wonders Rowena Hoseason, have they ever ridden one?

The one-pot wonder was stuttering badly on a semi-shut throttle as we hugged the verge to let a farm wagon go by. So I gave it a hefty handful leaving the village, over the bridge and up and away on the twisting B-road.

For some reason (stupidity, probably) I’d expected this 500 single to be, well, slow. I’d been thinking it would be like some trad old chuffer. But it’s not slow, and it’s no old chuffer. The Burgess pattern silencer, which has been transplanted from an unknown donor, and the K&N filter jammed rudely into effective if unlovely service, work some distinctly dark magic together to transform the black beastie. Under 1500rpm it’s a pig in a petticoat, tripping over its own trotters, fluffing like crazy and threatening to pack it all in at any moment. At 2000rpm, however, the gases flow just fine and ‘Arry Matchless takes off with a right little roar.

What a thug. What a find!

I really didn’t expect much in the way of thrills from this bike, to be honest. I mean, look at the pictures. ‘Arry is one of the first G80s produced by Les Harris’ factory back in 1987 (Harris Matchless. ‘Arry Matchless. Geddit?). That makes ‘Arry sweet sixteen, although he’s much more of a troubled teen than a delicate debutante. I don’t think he had much of sheltered childhood — it looks more like he’s been hacked from an early age. When we found ‘Arry he was the general runaround for S&R Motorcycles at Bodmin in Cornwall. He was notionally for sale, but they didn’t seem too bothered. We’d always wanted a Harris Matchless so did a bit of the wallet-waggling stuff and wangled a V5 and the keys out of a somewhat startled proprietor. I think he’d expected to keep ‘Arry for forever, and was only advertising the bike for sale out of a sense of professional duty… 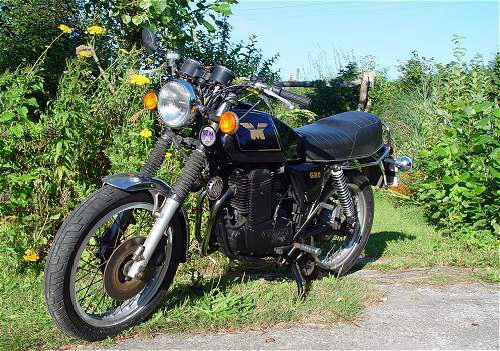 What we did next was slightly unforgivable. We collected ‘Arry in mid-winter, shipped him back to the temporary West Country Shed, and parked him. For months. The pictures you see here somehow don’t do justice to the grub and grime which condensed out of the atmosphere and amalgamated on every angle and aspect of the Matchless. Moorland mist crept into the Shed and took up permanent residence inside several motorcycle engines. The finish all but completely fell off the other Matchless – a previously posh G15CS. Lurking in the murk, ‘Arry appeared to be heading for permanent dormancy.

However, you can’t keep a rebel under wraps for long. The G80 is equipped with one of Rotax’s hard-working, 494cc air-cooled engines, and they all carry their kickstarts on the left. There was a Harris Matchless G80 built with a twin front disc brake and an electric start, but we didn’t fall over one of those. We fell over ‘Arry, and so must rely upon entirely traditional and physical forms of provoking ignition. Kick-starting a left-sider is an art form which we haven’t quite mastered – despite plenty of help from folks on the message board – but we managed to get ‘Arry going several times from cold with judicious juggling of the decompressor lever. (There’s a wee white blob on the camshaft which appears in a little window in the head, and when you’ve got the piston to that position it’ll start every time… or so I’m told. Fiendish tricky to see the little white blob when you’re hopping about on an unfamiliar leg. You know how hard it is to swap gear/brake feet? It’s much harder to swap kickstart leg. Oh yes).

Finally, finally, ‘Arry could emerge from the gloom. We’d re-discovered the insurance documents which were lost in the move (and then lost them, again when we moved once more, but not before we’d managed to do the road tax thing), and extracted the other bikes from the Temporary Shed – the ones which had blocked old ‘Arry in for over six months. Charge the battery. Pump up the tyres. Start to wheel the old boy out and…

Ooof. Get stabbed in the stomach by the handlebars when ‘Arry goes nowhere fast.

It might have been a small family of fieldmice in the rear brake drum, or an entire colony of spiders, or just an accumulation of condensation and its oxidising consequences. Whatever, ‘Arry’s rear brake was jammed on good and solid. How do you cure this particular ailment? You slacken off everything to hand, so that the rod-operated brake is utterly unadjusted, and then you haul the motorcycle onto its centrestand. Start the engine, make sure the rear wheel can spin freely and engage first gear. Ignore faint grinding noises… When the wheel is spinning reasonably (ahem) freely, you can stop the engine and re-adjust the brake. It’s best to check after you’ve covered a few miles and then re-re-adjust the brake again… 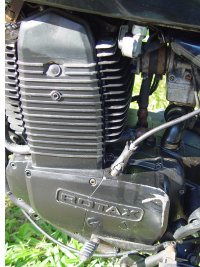 Fresh fuel in the tank – check the oil level – kiss best-beloved farewell and stand ready to roar off into the sunset. And I do mean ‘rhwoar’ with a capital R. You know how some old bikes sing a really appealing song; a nostalgic rumble and growl which has dads looking wistful and grannies smiling indulgently? Well ‘Arry doesn’t have that. ‘Arry has a bovver-boy’s bellow, the like of which inspires most members of Her Majesty’s Constabulary to reach for the notebook. We left the drive in a howl of slipping clutch and panic-driven acceleration – there was no chance we could stop in a hurry so it was best to join the road with the revs riding high!

Frank later told me that I looked quite alarmed after turning the bike around and trundling back down the steep hill past him, towards the main road and, eventually, ‘Arry’s new home. Alarmed? The thing had no tickover and was running like a jack-hammer; the brakes barely worked and the clutch most certainly didn’t; every part of the suspension which was supposed to move was seized solid and every part which should have been fixed appeared to be flexing; the gearchange was stiff and the throttle was sticking; and all this was accompanied by a racket equivalent to Concorde at take-off. Excuse me if my grin seemed a little… umm… fixed.

Twenty miles later, it was a totally different story. Some bikes just need to be ridden, with vigour, and the Harris Matchless is one of them. Lord knows what ‘Arry’s unique breathing arrangement has done to his power output, but the approximate 35bhp which you can depend upon this generation of Rotax motor to provide seems ample – and urgent. ‘Arry spits upon a half-opened throttle. The surge of shunt matches the snarl and before you’ve made a conscious decision to up the ante, ‘Arry is hustling along and waking up the neighbourhood. The brakes ain’t brilliant (although, once fettled, the 260mm hydraulically-operated front disc should be adequate in most conditions to slow a 330lb motorcycle and even a potentially portly rider), but the steering can cope with single-carriageway speeds very, very well. 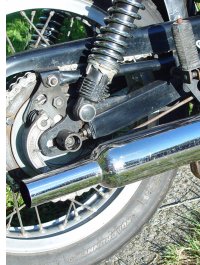 That Les Harris knew a thing or two about building bikes. His company had been building British bikes since the closure of Triumph at Meriden, and he employed an experienced engineer (Brian Jones, I believe) to fit the G80’s bits together in a sensible fashion. Thus, the Harris Matchless can swing bends with the best of ’em. I didn’t imagine that a parts-bin special (for this is an accurate if not complimentary description of these G80s) would feel so together, so capable, and so confidence-inspiring but – maybe it was the exhaust boom, tempting me onward – I was soon flinging it about as if we’d been together for a lifetime.

If only I’d known 15 years ago what I know now about the G80. Back then I was moving up to a larger bike, looking for something to boost my confidence as a relatively new rider. The bike press suggested that one of the reborn big singles would do the job; light weight, peppy, not too scary and full of character. I didn’t like the idea of a kickstart-only Yamaha SRX600, and the thought of buying a British bike never crossed my mind, so I ended up with a Honda. I think it lasted all of six months – the XBR500 was a pleasant bike, but a bit of a disappointment. It was touted to be an overgrown CB250RS, a brisk and nimble single, but I somehow never really got to grips with the bike.

Nor – back then — did the buying public. The XBR lasted for four years, which was better than the SRX which was on sale in the UK for just half as long. Les Harris made Matchless G80s from 1987 and into the 1990s, and even then he was ahead of his time. The market he was aiming for, with this timeless, lively 4-valve single cylinder roadster, hadn’t quite matured – it took BMW’s collaboration with Rotax, and the next-generation of water-cooled engines, to reveal what a smart idea it was.

And thinking further along those lines, you gotta wonder why Mr Bloor hasn’t ever produced a bike for this very purpose. An entry-level streetbike, a British bike for the Direct Access learner crowd. Now that CCM have switched to Suzuki engines, the way must surely be clear… isn’t it about time we saw a Triumph Cub on the stocks again? 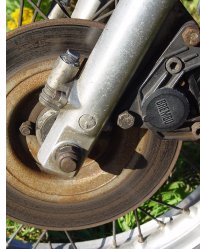 Anyway, I’ve digressed. Harris built his G80s from the European Parts Supply Co, which means that ‘Arry boasts components from Brembo, Paioli, Marzocchi and the rest of the gang. The oil-bearing frame was designed for the bike but even the saddle and tank are leftovers from other projects – the former came from the Bonneville, and the latter looks suspiciously like a Laverda item to us. Yet it all hangs together in a coherent manner – I can’t say that the styling knocks me out but functionally it’s real hard to criticise. The G80 was built by experienced motorcyclists, and assembled by hand, by real people working with real tools and real expertise, and they should be proud of the job they did. Even after a hard life and with minimal maintenance, ‘Arry is still keen to go, up for some fun, ready to rock ‘n’ roll.

There are 101 jobs to be done on ‘Arry, and it seems weird to be contemplating a rolling restoration of what is to all intents and purposes a modern bike. But the Harris Matchless G80 is a bike worth keeping alive. You can call it a ‘classic’ or not; that makes little difference to me. The Harris G80 very nearly bridged the gap between then – the old, failing and flawed, traditional British industry – and now, the fuel-injected, liquid-cooled stealthily-silent era. It didn’t go down as a landmark motorcycle for many reasons – not least the problems of a small manufacturer trying to sell a new model in America. But it’s a cracking, entertaining, gritty little bike, so it’s very welcome in our Shed. 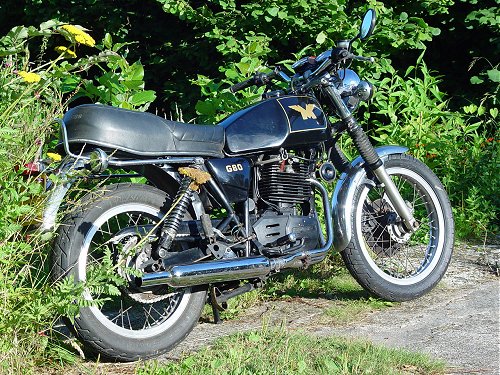