He rode for 20 years in the fast lane, and then PaulG80 discovered an entirely different world with Matilda the Matchless…

After 18 months of being off the road while rebuilding my BMW (which is an entirely different and very long boring story), I was getting an extremely itchy throttle hand. My Dad took pity on me and asked me if I wanted his Matchless G80 to ride. Let’s just say his arm got stitched back on just fine!

(For those unfamiliar with the breed, the original Matchless G80 was one of the post-war AMC stalwarts; a flexible, workaday low-revving heavyweight 500cc single. We’re not talking about the Rotax-engined Harris G80 here! TP).

So our first trip was to the MoT station, with my brother riding shotgun on his Hornet. We made it in a flurry of wrong gearchanges and near misses. Made a mental note to myself to think more when in control of British bikes.

After flying through the MoT we headed back on the road for the 60 mile trip home. Let me tell you something; the M25 has never been an unfriendlier place. As poor old Matilda (for that is what she got named) had not been used for a year or so, she was a bit reluctant to say the least. We settled on an agreeable 50mph cruising in the inside lane. Whilst doing this I experienced a very strange thing… I started to see my surroundings! I noticed the fields, the farms — and how scary lorries are when they overtake.

On my arrival at home I collapsed in a chair as I was most tired, but She Who Must Be Worshipped noticed something very odd about me. I was grinning like the Cheshire Cat. It was great just to ride again. The next day, after all the aches and pains had faded, I went out to the garage and set about adjusting everything to suit me and finding out where everything else was hidden. Then Matilda was pressed into sunny day service (well there’s no point having a c*r and getting wet, is there?).

Over the next month or so I learned to ride a British bike in the appropriate manner. I started to leave bigger gaps to avoid those OHMIGODI’MGONNADIE moments that come with drum brakes. I learned to set up for corners earlier, rather just throw the bike in and make it up as we went along (the FireBlade habit). I stopped changing down for corners and started enjoying letting the bike tug me round. I grinned more. I finally mastered the gearchange — as after years of Jap bikes I thought the whole world was one down five up, not one up, three down.

The next move was joining the owners’ club, and then I found out on a run (at night) that the lights didn’t work (gulp). Luckily the dynamo was quite easy to fix and now I just need to get the courage together to test it at night. The club feels like a strange thing in itself; a complete social life of runs and meetings, but I’m still at the toe in the water stage. 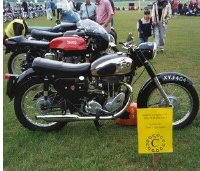 All the while I have been looking after Matilda strange things keep happening — like people turn round while walking on the pavement and watch you ride past. Gentlemen of a certain age come up to you when parked and tell that they had a bike like that but ‘preferred their Vincent’. I didn’t know the Stevenage factory sold so many bikes! I entered my first show at Knebworth and rode round the arena and lined up for judging. I didn’t win anything but at least I had ridden in to the event (ooh contentious!).

Just to clarify what I’ve been rambling about: I have been riding for 20 years this year and the 18 months before Matilda came along was longest I have ever been without a bike. Still the BMW is rideable now so I’m spoilt for choice.

All in all, life with the G80 has been a very pleasant experience and I’m finding that I don’t miss big Jap fours at all. I’m just dreading the day that Dad asks for her back because I think he may have fight on his hands.