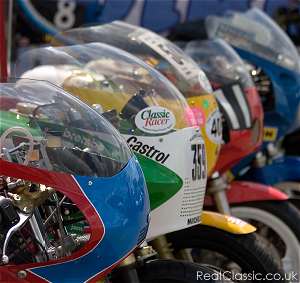 Many classic motorcycle enthusiasts were deeply disappointed when the VMCC decided not to run their usual Festival of 1000 Bikes in 2014. But all’s not lost: the new management at Mallory Park are on the case…

In recent years, the VMCC’s Festival of 1000 Bikes at Mallory Park race circuit has given classic riders the chance to exercise their old bikes on track and admire the exploits of many past masters on famous racing machines. It’s been a spectacular weekend. However, it hasn’t always been a profitable event. Following management changes at both the VMCC and Mallory Park, that they would not be running the Festival in 2014.

Then the new management at Mallory Park, Real Motorsport Ltd, made this announcement on their Facebook page last week:-

‘As most will be aware the VMCC has pulled the plug on the Festival of 1000 Bikes for 2014. This did come as somewhat of a surprise to us however circumstances change and that is a democratic decision from the VMCC.

‘Fear not, “Mallory Classic Bike Fest” will now replace the dates booked for the Festival. It will be a similar format with some tweaks that will be made after listening to spectators and participants from previous years. Further information will be available shortly on our new web site that is nearing completion www.malloryparkcircuit.com

‘Put this date in your diary 12-13th July. As we have more news we will publish.’

That date is exactly the same as the weekend which was originally scheduled for this year’s Festival of 1000 Bikes. When the Fest1000 was cancelled, it looked as if the gap would be filled by the TR3OC’s long-running classic track day and rally, Beezumph. And indeed Beezumph 23 has been scheduled for July 11th and 12th 2014 and takes place at Cadwell Park circuit. So it looks like classic riders will have a choice of track events to attend on that one weekend: not an ideal situation…

More information on the Mallory Park Festival was released this week by Mortons Media Group:

‘A celebration of motorcycles featuring more than 1000 two-wheeled dream machines will be held at Mallory Park Racing Circuit in Leicestershire this summer. The newly christened Mallory Bike Festival takes place on July 11, 12 and 13, 2014.

‘It will be run by circuit owner Real Motorsports with Mortons Media Group, publisher of The Classic Motorcycle and Classic Racer magazine as official media partner.

‘Real Motorsports co-owner Stuart Hicken said: “It’s going to be spectacular. There will be more than 1000 bikes parading round the circuit and a number of famous riders making an appearance. There will be classic sports bikes, an autojumble and loads more.”‘

It’s not clear from the info so far what format the Mallory Park festival will follow (or even what the event is officially called). Many classic riders will be waiting to see if the new Mallory festival offers them the opportunity to ride in multiple track sessions over the weekend, or whether on-track activities will be limited to more sedate ‘parades’. Meanwhile, the TR3OC are accepting entries for track sessions at Beezumph.