‘It’s very nice, but…’ Journalists ride other folks’ bikes all the time. Frank Westworth has just loaned his Number One Favourite Motorcycle to someone else…

It is a very long time since I could remember how many motorcycles I’ve ridden. It must be a huge number by now. I doubt that I have ridden more motorcycles than I’ve had hot dinners, but I think I’ve spent more time riding than eating. If that means anything, which I also doubt.

Riding bikes belonging to other folk is generally an entertainment. I attempt to make the experience as un-distressing as possible. I attempt to arrange kind climes (if the power of positive thinking is a reality, that is). I attempt to reach the rendezvous early (have managed that at least once in the last year). And I always attempt to be kind about the bike. Being kind and being charitable are usually pleasant experiences. It can sometimes be difficult to combine charity and honesty, however, which may bode ill for my afterlife.

Because some bikes are truly horrible to ride. It is not polite to say this to Proud Owner. Nor is it clever. Which can sometimes make writing them up for a magazine into more of a challenge that it should be. I once rode an Ariel which was so utterly, completely and comprehensively appalling that I ended up writing a history of Ariels using the photos of the bike to illustrate it rather than a tale of the bike itself. I once rode a really rather rare AJS which was so unsafe that I dismounted after less than a hundred yards and declined to ride it any further. Proud Owner put it back into his van and has never spoken to me since. Sad but true. Some bikes – even some expensively comprehensively restored bikes – are horror stories. But most are not. Happily.

Seismic vibration, terminal incontinence, ineffective anchorage and fatally inaccurate steering are faults which are hard to ignore, and ignore them I will not. However, vibration is always present, even in Norton Commandos and Suzuki RE-5s; most bikes more than a quarter-century old ooze, weep or leak a little, as may their owners; drum brakes with lining areas the size of a large postage stamp do not compete with twin discs, and some utility lightweights of the post-war years can be eccentric in the steering department. Ace Roadtester needs to know about this and to make due allowance. I am said Ace Chap and I do. Mostly.

After the facts of a test bike have been related, opinion follows. Which is what I personally most like to read when I read a feature about a bike. If a tester’s memory has not been vibrated to jelly by riding a thousand Triumph twins, then she or he can offer hopefully meaningful opinion based upon riding those thousand Triumphs.

So far, so predictable. What is more of a worry is when a pal asks to ride one of my bikes. When I borrow someone’s bike, I usually offer to let them ride mine, provided that they’re insured for it. This has occasional moments of terror. I borrowed a Hesketh V1000 from a very nice man, and invited him to lead me to some photogenic spot aboard my own Norton Commander.

He instantly demonstrated two things. Firstly; he is very familiar with the roads of North Devon. Secondly; my Norton Commander is capable of speeds way beyond my experience of it. It will easily, for example, crack the ton. I didn’t know that. Now I do. I also know that a Hesketh V1000 will easily crack the ton. And that my Norton Commander can corner on its footrests at speeds which would bring tears to the eyes of a magistrate. It was a truly startling experience and I was stunned almost to silence when we pulled up to take the pics. Luckily, Proud Owner thought I was stunned by the magnificence of his Hesketh, so honour was safe.

Another pal recently wondered whether he could perhaps take a spin on The Very Best Bike In The World (no argument). He was passing from his home in distant eastern Yorkshire on his way to Portsmouth and plainly Bude was on his way. Yorkshiremen have a challenging and creative view of geography. I blame satnav. But I agreed that he could indeed cast a limb across the delight which is my Norton Commando Mk3, a decent-enough machine until the fabled Les Emery at Norvil converted it into The Very Best Bike In The World (no argument), a couple of years back. If ever there was a flawless Commando, this is it. I take no credit for its excellence; all I do is ride it and swoon. Blimey, etcetera.

My pal arrived. He stormed away into the soaking wet day aboard the gleaming Commando. I pause here to reveal that he had previously owned a Commando of his own but had ditched it due to its unlovable nature. I had suggested that he should ride a good one; and that mine was the very best in the world, and so on.

Time passed. The rain stopped. More time passed. My pal returned. He parked the bike. He clambered off. He looked very thoughtful. He apologised for getting it filthy, as was only right. He sank a cuppa and left, aboard his spangly new Triumph of terrifying complexity and performance. He cleverly, cunningly and completely avoided making any comment about the Commando. He plainly hated it. But it is The Very Best Bike In The World (no argument). How could he not love it to bits? 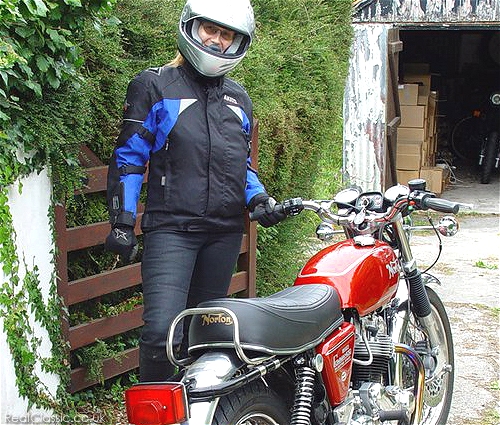 Excellence is in the wrist of the beholder. It is always worth remembering this when you are reading a road test. Or indeed writing one…