Mention Brough Superiors and TE Lawrence and you run the danger of disappearing under pomp and circumstance. Not so with this charming, enthusiast’s DVD…

Are you cheesed off by the snore-ripping attempts by certain bogus video makers who think that they can cash in on our weakness for old motor cycles? I am. I’m steaming livid! You probably know the ones that I’m talking about which make you yawn at the very thought of having to sit through a whole hour’s worth. How could anyone make old bikes be so boring to such a wide eyed audience? They must possess a rare and evil genius.

There’s a certain tongue-in-cheek, almost surreal quality to the film like a school project with dad’s cine camera after a few spliffs. They even hired a real actress with gripping hands and eagle eyes for the bookshop assistant role so the boat has been well and truly pushed out. This film has been put together by Dutchmen (I think) [it was] which lends a certain charm to the other-worldliness – and the Europorn never actually happens by the way.

Broughemia rarely comes so cheap and you’ll forgive the use of sidevalve machines in place of the original OHV Georges I – VII as it doesn’t matter because you the viewer are enjoying the scene. The DVD ‘extras’ take a closer look at these T.E.S. machines as they are now but contains no sound. The limited edition (300) ‘Two Superiors’ book is also featured in the film which can still be bought from about eighty quid which is probably bargain in Broughastan. 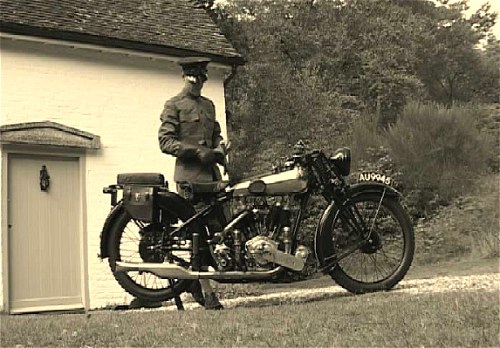 Some people like to look down their noses at Broughs and if you think that they’re glorified parts-bin knockups and that T.E.S. took his pleasure from sheep then you should probably not buy this DVD. For everyone else however I heartily recommend this warm hearted production which didn’t raise a single yawn. I could even watch it again.

DVD: The Motor Cycle Passion of Lawrence of Arabia is available from Speed Wobble Films; www.speedwobblefilms.com and costs a strange number of Euros (we’ll get the hang of them eventually, once we’ve caught up with decimalisation) [It’s 8 quid. RM]

If you’d like to learn more about Brough Superior motorcycles or the life of TE Lawrence then there’s plenty of related reading matter at Amazon, below…