Dave Minton has been riding Laverda triples for over 30 years. Meet his favourite and be surprised: it’s no Jota (but it does make all the right sounds)…

At between 2500 and 4000 revs in the higher gears, 180-degree Breganze triples make wonderful noises — a sort of basso profundo gargle, not unlike a narrow angle V-twin. Just as it begins to fade, the accompanying parallel twin underlay swells from an inconspicuous moan to a howl of released power.

We were on our way back to Britain with the first Laverda triple, the 3C, Roger Slater (who held the British Laverda concession then) and I. Winter arrived early in the Alps that September in 1972 and our lightweight summer gear was insufficient to deal with unseasonable bitter cold and deep snow over what I recollect was the St Bernard pass (although it may have been another). So we took the rail ferry through the tunnel and exited in a Switzerland buried beneath a few feet of ice and snow.

Roger seemed to think it was all a bit of a giggle at first. Well, he would, because while he was secure on an ordinary 750SF, I, being the privileged journalist, had sole responsibility for the precious new press-demo 3C. After a few miles ‘tight-rope’ riding down the mountain road while I sweated in fear of disgracing myself, while simultaneously freezing in the blistering cold, we stopped at the first village and booked into the only hotel.

With numbed fingers we failed to release our crash helmet buckles and had to sit in the reception lounge cuddling glasses of mulled red wine until feeling returned. Roger was displeased because while following me he noticed that I had been ‘snatching at it’ — he had seen the 3C’s chain shaking under low-speed combustion pulses. It was no good arguing with him.

Eventually we managed to remove our helmets and settled in the snow-besieged hotel to await snowploughs. I attempted without much success and borderline honesty to explain to Roger that the ‘snatching’ which had so offended him was a consequence of the dire need to keep revs down over snow and ice. What I did not confess was my compulsion for the 3C’s lusty low rev torque and magnificently off-beat exhaust throb! I simply could not get enough of 3000rpm-ish high gear acceleration whenever possible.

We left the following morning. The steep mountain pass was clear of snow but polished to a glaze by the plough blade and other vehicles. Thankfully the road eventually cleared and the rest of the ride passed uneventfully, save for a lunch of staggering proportions near Chalons, which Roger beamingly recorded as a; ‘real Froggy blowout’, taken in celebration of our survival. 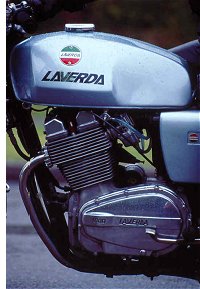 I was smitten and have remained so ever since. You have to remember that this was 30 years ago when the Kawasaki Z1 had only recently arrived. While its 82bhp engine was at least the equal of the 3C, its rolling chassis’ weak-kneed and imprecise performance was not. Japan had yet to grasp that unless it was cradled by reliable brakes, disciplined suspension and a torsionally stiff frame, the power of an engine could never offer much more than notional potency.

This was never the way of the 3C. From the word Go it was pure sportster. A little harsh by way of stiff suspension and, perhaps, not quite as smooth in its power delivery as the Z1, but it would scorch to 130mph without much more than a mild and harmless rear end squirm. At least, the cast aluminium wheeled models would, for I had a few funny moments on the wire-wheeled pre-Jota 3CEs,

but that’s another story.

Two long, hard trips to Italy on the big triples convinced me of their fine qualities. They were incomparably fast, tireless and safe under all conditions at a time when ‘trustworthy’ was rarely employed to describe sporting attributes. You could brake in the rain on the 3C’s big Brembos. Do you remember how Italian bike owners, red-eyed and black fingernailed from unscheduled servicing, would with immense pride exemplify their trusty, red oxide dusted brake discs? And immaculate Japanese bike owners would point out that at least their bikes kept running in wet weather, even though they might not stop running when so ordered!

Before the 3C had properly settled, Slater Brothers developed the Jota. Following almost a year’s development on the track in the hands of mainly Peter Davies and Roger Winterburn, and on a Heenan and Froud dynamometer (JAP’s old one, oddly) in the hands of Roger and Richard Slater, the awesome Jota blew everything, including its 3C brother, through the weeds and into the wilderness beyond. 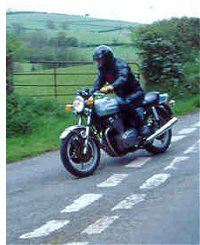 While all this was good for Laverda it was hard on the standard 3C, which by all standards save that of extreme speed was superior to the Jota. It was also a bare 10mph slower, undeniably sweeter and possessed a very useful power plateau beginning at 2500rpm, a mere 45mph in top gear: the Jota’s power crashed in, almost literally, at 6000rpm — 108mph.

Unfortunately the rough, tough legend of the Jota spilled over to stain the standard 3C which was then, and remains today, far from the coarse and raw animal it is supposed to be. When I first rode a pre-production drum-braked example back in, oh, 1970 was it (?), the big three felt massive. Now, compared to, say, an initial Hinckley triple, the Breganze bike feels nice, neat and cobby, light and flickable as a modern 600. But rugged, too. Alas, they really don’t make ’em like this any more.

Unlike their 750cc twin cylinder brothers’ impregnable reliability, the triples — while generally good — were not faultless. But, of course, rumour proved stronger than fact. The first year’s production revealed a vulnerability to dampness of the Bosch ignition signal amplifiers. Then came the batch of faulty camshaft bearings. Certain models exhibited camshaft pillar crumbling, although this proved to be as much a problem of incorrect assembly as anything else. Others suffered from loosened valve seats. Slater Brothers either dealt with these under warranty themselves or factory mechanics handled mass rectification work.

Any 3Cs by this time are either one of the majority without defect or have long since been corrected. Minor problems displayed by exceptionally hard-ridden models are very occasional front mudguard stay fracturing caused by the tele-leg ‘walking’ under high speed duress, and instrument bracket fractures.

The only insurmountable difficulty has been the miserably weak Bosch alternator. No others were available from any electrical specialist. The first models had to make do with an insufficient 100W to maintain a fully charged battery at night. By the second year generator output was just about enough to balance a headlamp load at 125W and this lasted through to 1978 when 140W was provided. Owners of 125W models are advised to fit a 21W daytime riding lamp bulb in place of the parking lamp, and if planning a winter’s night-long ride to ensure they have one of the original 32ah batteries fitted…

The bike seen here was supplied by John Fallon, proprietor of Mdina Italia. Laverda triples, it seems, inspire him with confidence; ‘Some older Italians can be a can of worms,’ he says, speaking from experience. ‘You open them up and everything’s worn. But if there’s trouble with an old Laverda I know that I can replace the problem part and the rest will be fine. No problem.

‘They just go. And they keep on going.’ 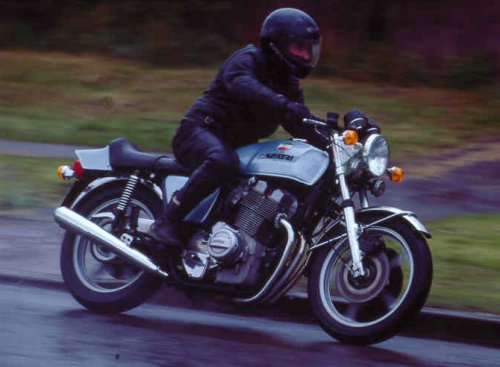