This Laverda triple, says Dave Minton, was a memorial to an heroic age, when mighty power made uncompromising demands and the consequences were thunderous. Boom!

In the early 1960s Fritz Egli campaigned the European Hill Climb Championship on a Vincent Black Shadow tuned to full race Lightning trim. Dissatisfied with its roadholding up the excruciating long and convoluted Alpine tracks, which were sufficiently formidable to confound most ‘ordinary’ racers anyway, he designed a brand new rolling chassis for his V-twin.

By training and profession a mechanical engineer, Egli believed whole-heartedly in Stevenage’s design philosophy. This stated that as the power block must of requirement be torsionally stronger than any frame envisaged then, ergo, it should double as the motorcycle’s main stress member.

By the end of the 60s, Egli had in production his now famous spine frame which, while wholly different in form to his mentors’, Philip Vincent’s and Phil Irving’s, radical spine frame, in fact conformed entirely to its theory. On his own tube steel spine frame, Egli won the Championship, and by so doing became famous as Europe’s foremost chassis constructor. Although less well known in Britain than on the Continent, Egli’s frames have proved their unsurpassed qualities in dozens of replica manufacturers who have since paid commercial homage to the original. And none have equalled it.

Only the McCandless-Norton featherbed frame has been as widely inspirational. By the early 1970s Kawasaki, as well as Honda France, was employing Egli to hold the wheels of their endurance racers in line, which was an entirely new and ultimately race-winning experience for those involved. After that it was to Kawasaki, more than any other, that credit went for wresting the endurance racing championship away from Laverda’s SFC 750, then from 1970-on its 1000cc 3Cs.

In parallel with Kawasaki and Honda’s appreciation of Egli’s rolling chassis skills was public appreciation of the Japanese engines. In consequence Egli and Laverda never got much together. One of the very few 3Cs to be cradled in an Egli original is this one, owned at the time I rode it (back in 1998) by arch-enthusiast Klug of Lincoln. Even it, though, was constructed in 1975 by Graham Binnion on behalf of Slater Bros, then British concessionaires for Laverda. Binnion worked in Switzerland for Egli and was later licensed by him to build frames for him in Britain. 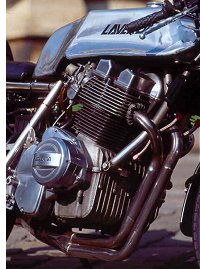 Built in 1975, one year before the 180-degree ‘Iron Maiden’ Jota appeared from the Heenan and Froude dynamometer dominated development shop of Roger and Richard Slater, the Egli 3C was built for Alistair Bramley of Bristol for £1600 complete. Little more than a year later, Bramley needed a house and made the ultimate sacrifice, selling his beloved Egli for £1200 to a Nottingham buff.

After changing hands a couple more times it arrived in Mark Aldridge’s hands, who in turn sold it to Klug, a fine eccentric of the first water whose house, work, culture and social dictates are formulated around his beloved bikes. He was thinking of selling it when we got together. How much was it worth then?

‘I wanted £8500 for it but Phil Worth of Italia Classics told me that its value lies somewhere between £1million and nothing. It’s unique. Normal rules don’t apply!’

Normal rules don’t necessarily apply on the road, either. Under 80mph the Egli Laverda ambled amiably around, heavy on the steering, mumbling bass-voiced to itself as though bemused by the idle dolt on its back. It needed a masterful hand and body shifts to respond well, due in part to the sheer mass of its over-engineered bulk, and in part to its power style. The power slugged its way from combustion chamber to rear wheel in a rippling series of unashamed Bofors gun-like explosions. I was reminded of the scalp-crawling sound of the early Anglo-American match races when shrieking triples, fuming parallel and booming V-twins shouted defiance at a quaking world! 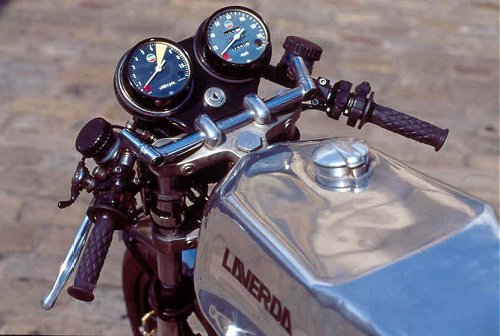 The Egli’s narrow clip-on and rearset kit placed the rider weight forward over the front tyre to dampen lateral forces, as nature intended for racing purposes. Because of this the Egli felt seriously purposeful, informing me without any shadow of doubt that it meant business at speed to be conducted properly. Somewhere between 80 and 90mph, what had been weighty potential slid into easy movement, as the big silver beast found its stride. At 90mph the Egli was barely into the first stage of my seduction as it sped on.

What was so very impressive about the Egli was the sheer implacability of the thing at very high speed, and this, remember, was no blue-printed darling. This was a 10% worn-all-over old campaigner, the survivor of numerous, hard-riding owners of who-knows-what skills. I have no idea of the Egli’s top speed although it whistled over the ton with contemptuous ease. Because of the racing stance its racer layout provided, the Egli was fluid and stable around Lincolnshire’s fenland curves.

When the Slater brothers were developing the Jota through 1975 they discovered that standard 3C triples developed 71bhp at 7500rpm, measured at the gearbox sprocket (which approximated to factory claims of 80bhp at the crank). But Roger Slater was convinced that production models never went like the prototype he had ridden back in 1973 (a theory with which I heartily concurred), and it exhausted through a triamesed system ending in a big megga. For all other tuning mods incorporated into the Jota, nothing matched the importance of its free-breathing 3-into-1-into-2 exhaust. Of that, its enormous 2-inch single collector pipe replaced the original 0.75-inch item and was of prime significance, raising power by 9bhp at the gearbox sprocket.

This 3C is not a Jota but it does have a free-breathing exhaust system, although Klug is unconvinced of its efficiency. ‘If I’d known in time you were going to ride it, I’d have fitted Jota exhausts.’ He grumbled good naturedly. ‘It’s got a big flat spot mid-range.’ True enough there is a dip in the torque curve but this may well be due to the worn Dell’ Orto slides, which also caused a bit of hunting, and the engine does come on bugle around 6000rpm. But ain’t that just the way of big bad Laverdas?

Besides, Klug, I felt yours would output a standard 3C all the way, rudely. Which may have had something to do with the Jota cams someone fitted. If it was my bike then I’d have refurbished the carbs and had the engine Dynajetted before pressing on with expensive refits. The blueprinted prototype Slater and I rode so long ago ran better than any production 3C in a triamesed system and semi-open silencer — just like this bike.

The Egli displays some rider empathy which you don’t always associate with such stripped-back brutes, through its electric starter, comfortable seat and informative instrumentation. Its top speed could be suggested to hover around the 140mph mark. Following the Jota reputation, most riders might assume that the 3C’s vibration would be rough. Not quite. The Laverda triple shook and thundered, especially under 4000rpm. But it was a pretty harmless, low frequency shudder which at speed more-or-less faded into the general melee of windlash and bounce.

Long distance comfort plays, or should not play, a judgemental role with this machine. Stands, switchgear, pillion and luggage equipment, even lights, are without its design brief. The important standards are: