The MCC’s Land’s End Trial takes place over Easter weekend but a shortage of marshalls threatens the event. Could you spare a couple of hours and enjoy one of the world’s premier off-road events to boot?…

Over 380 people have entered the 2012 Land’s End Trial, confirming the popularity of this long-running event which mixes road navigation with off-road sections. The trial starts on Good Friday in Somerset and wends its way across the moors to finish deep in the Cornish hinterland on Easter Saturday. Thousands of people turn out to enjoy the spectacle of vintage, classic and modern two- and three-wheelers tackling some fiendishly tricky muddy sections, but the precious few marshalls have stepped forward this year.

Celia Walton and Rowena Hoseason in 2009

The Motor Cycle Club which organises the Lands End Trial say they are particularly struggling on some Class 0 sections – which are the easier off-road trails intended for less experienced riders or those on road machines. There are also some vacancies on the main trial; in daylight, at night or starting during the wee hours and finishing during the day. Marshalling at this kind of event is a unique experience – plenty of thrills, spills and expertise to admire. The Lands End Trial offers an unmatched blend of riding skill and motorcycling camaraderie and comes highly recommended. You may not fancy riding in a trial of this type, but marshalling gets you very close to the action… and gives you a great excuse to eat home-baked fruit cake at a remote West Country farmhouse at 3am, being serenaded by revving engines and shouts of encouragement from the crowd.

Men and women have been riding in the Land’s End Trial since it was first established in 1908. The Motor Cycling Club itself was barely a few years old when its new president, Charles Jarrott, offered a trophy for the winner of a timed run from London to Land’s End and back. A couple of dozen brave souls started the course and half of them returned intact to the capital from Kernow and reached the finish. The winner of the Jarrott Cup for the rider keeping closest to the required average speed throughout the initial Land’s End Trial was S G Frost on a Minerva. Mr Frost and his fellow participants started a trend which has been followed for over a century. 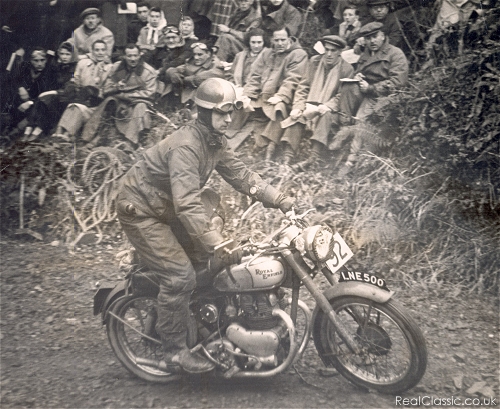 When the MCC events were in their infancy the club ran trials on the main roads of the day and these proved to be quite tough enough at the time. As road surfaces and vehicles developed so the route took to B-roads and byways, and started to seek out steep hills covered with shale and slippery surfaces. Initially only two-wheelers took part but from 1914 light cars were admitted. From 1920 the Land’s End Trial became a one-way event, dropping the return leg back to London. The finishing post has moved around over the decades, even heading all the way down into the toe of Cornwall’s boot at Land’s End itself, but these days it’s higher up, near Newquay. 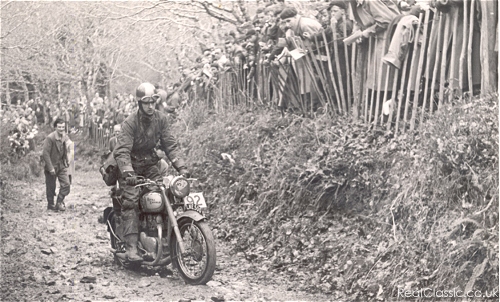 The Land’s End Trial grew in popularity during the 1920s and established its enduring format. Observed sections of particularly tricky hills were added to the route and popular ones, like Beggar’s Roost and Bluehills Mine, are still high points in the trial some 85 years after the first competitor didn’t quite make it to the top cleanly. Over the years the special sections have become the core of the event, with the mileage in between them proving less of a challenge to modern machinery. Even so, competitors must travel to the start and then tackle another 250 ‘easy’ road miles through the night – plenty of challenge there to exercise the mind and leave riders just a little fatigued by the following afternoon. You try riding up a muddy escarpment when you’ve been awake and cold for the past 30 hours…

Huge numbers of competitors entered the Land’s End Trial during the 1930s, so by the middle of that decade the MCC were involved in heavy engineering works to create the ‘new’ section at Bluehills Mine. The earlier one-in-three road had to be replaced because it became too easy for the cars, bikes and competitors of the day. Manufacturers were providing works bikes for their favoured riders, so the MCC leased ten acres of moorland and enlarged a miners’ footpath along the cliff top. With careful development and maintenance that same section remains one of the most famous in the trialling calendar.

Today Bluehills mine is indeed a spectacular site offering a spectacular sight, with the Atlantic crashing below and a steep chalky challenge rearing fearsomely towards the sky. Yet it offers more than a mere physical test; Bluehills and indeed the majority of the Land’s End Trial provide an opportunity to ride in the wheeltracks of history. The archive photos show RealClassic magazine reader Bill Soltau on his special Enfield at Darracott and Hustyn in 1952, where the action attracted quite a crowd, and those sections are still popular places for spectators to gather today. 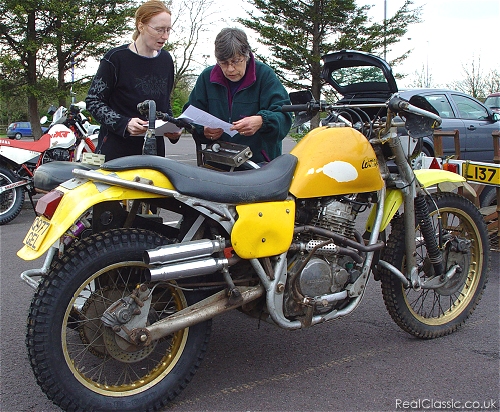 Celia Walton and Rowena Hoseason in 2009

This isn’t a retro event or a recreation of past glory: today’s LET is little different to the Trial of the 1930s. So any competitor can pit his or her skill against the same challenges which confronted previous generations – although we can choose to use modern machinery, of course.

However, the LET won’t continue to thrive without more volunteers who are prepared to give up a few hours of their time and marshall the event. If you could help, then the MCC would be delighted to hear from you.