Ken Sprayson’s expertise in the design, fabrication and repair of motorcycle frames is the stuff of legend. This autobiography captures an era of the British motorcycle industry when personal skill, enthusiasm and hard work were highly valued…

At last. Ken Sprayson has been around the British motorcycle industry for so long that everyone knew he had a lot of tales to tell. He’s been inside the industry too, met all the great names and worked on all the great marques. Well done, then, Panther Publishing for bringing us his own story in his own words.

It’s a remarkable tale, too, packed with detail, detail about a world which seems alien now. Read the early chapters about Ken’s first working days, and you’ll see what I mean. The basic tale is a familiar one to any students of 1940’s Britain. First job, call-up, post-war work, in this case a position at what was by then the Reynolds Tube Company. They made tubes (there’s a surprise), and among many other fields they worked closely with Midlands motorcycle manufacturers.

Did you know that Ken Sprayson built the first Norton featherbed frame? Not the original devices supplied by Rex McCandless, but the first of the very many built for Norton Motors themselves. Do you know what Reynolds 531 tube actually is and why it was so famous and so successful for so long? It’s all here.

Do you know how many of the smaller British manufacturers used Reynolds’ frames? That’s all here, too, and it will surprise you. As will the Reynolds Duke Velocettes. The what? Read about them here… 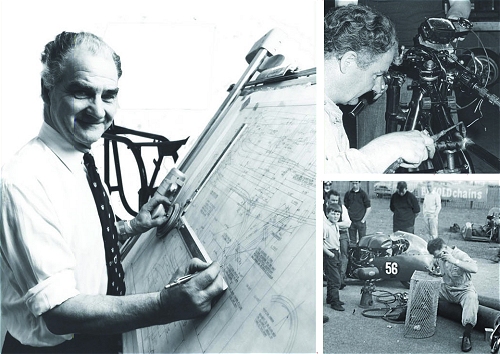 This is a fascinating read, whether you decide to view it as an autobiography, which it is, or as a study of post-war British industrial history, which it also is. As Ken Sprayson’s career developed, and as he grew from teenager to adult, so the industry grew around him. Through his eyes we share in the steady record of achievement and success, viewing it from the position of a privileged insider, someone truly involved. Not, for once, a racer or a motorcycle manufacturer, either. Ken Sprayson designed and built the bicycles ready for propulsion by a wide variety of engines (an NSU twin, anyone?) and for a wide variety of riders, as well as chassis for Land Speed Record-beating cars, and stands for cash registers…

We all know what happens, though. As the author approaches middle age, providing his famous welding services at the TT races every year, so the writing on the wall for the motorcycle industry becomes ever more strident, until, and with startling rapidity, there is almost no industry left. Reynolds becomes increasingly submerged inside the mighty Tube Investments, its parent company, and loses its identity, as is often the way when the needs of a small, thriving business are ignored by its larger parent.

It would be wrong of me to describe in detail what happens; buy a copy and read it for your own pleasure … and pleasure it is, because Ken Sprayson comes across as a man of resolute good humour, a man determined to make the best of whatever comes his way.

It would be easy to dismiss this book, to think ‘Oh yes, Ken Sprayson, didn’t he weld up some frames?’ but that would be missing the point entirely. This is an excellent read. It’s packed with personality, anecdote and humour, as well as more motorcycling inside stories than you might imagine. It’s really good. Thanks for writing it,. Ken, and thanks for publishing it, Rollo!

‘Ken Sprayson: The Frame Man’ is published by Panther Publishing