Who can catch a Kawasaki? Message board regular Kevin sets the bait for a Z900 but reels in a pristine KZ650B2…

I always loved the look of the Kawasaki Z900 from the day I saw an old friend turn up at the local pub on his new one, in fact that was part of the reason I bought my KZ650. Yes, I do know it says KZ and not Z, for that is what I own, a KZ650-B2 built for the American market in 1978, and imported here many years later.

I was in the market for a good usable “winter hack”, something I could ride and not really care about; yeah right, like that’s going to work! I have a 61 Triumph sitting here waiting for the summer and it needs company, and I want to ride, so I need something cheap. That’s the “brit” angle out of contention then, as they are just not cheap these days, so it is time to look to the east. Funnily enough I ended up looking to the west!

My first thoughts were for a Honda 500/4 and to be fair I would still like one, but just by chance the lure of the “Z” raised it’s head and I knew that was what I needed.

Enter eBay. The first one I went to see was a ’77 B1 with the single front disk and brake calliper in front of the forks. It was in that nice candy emerald green, but the electric start never worked and the paint on the tank was very poor. Otherwise it was all there, started first kick and had some mot but no tax. With 60,000 miles on the clock it was probably a deal for the £650 being asked, but it was not for me. 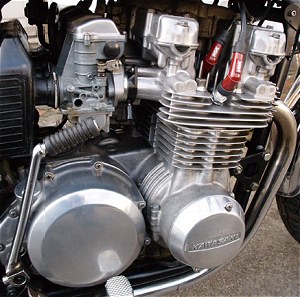 A couple of weeks later a 1978 B2 with 36,000 recorded miles came up on eBay, with a ‘buy it now’ of £950 and an unknown reserve. Combined with some very poor quality pictures it never sold, so I e-mailed the owner with a fixed price just over the highest bid, and asked if I could see the bike with a view to buy. He agreed on both counts, and so with a van borrowed from work I headed to deepest, darkest south Wales, on a very dark, wet and windy night!

Upon finding the seller’s house we entered the garage where the KZ650 was housed along with two other bikes, and it started right up from cold on the electric start. A good look around – but no test ride – showed what appeared to be a very solid and well cared for bike, with plenty of history in the shape of old bills and Mot certificates, but no current mot or tax. It seemed just what I was after, so a deal was done, the bike was loaded in to the van, and I headed home. 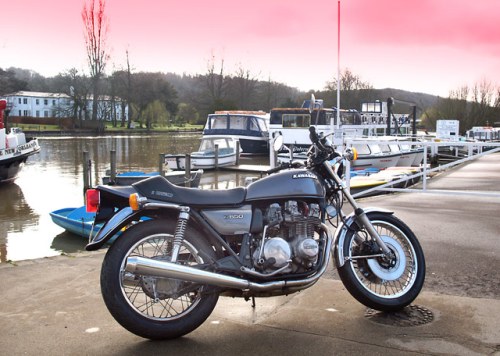 Ok, a little history then. The Z650 first appeared in 1976 and came in the fetching two colours of candy super red or candy emerald green. This continued up until 1978 when the B2 hit the streets, only this time the colour choice was luminous dark blue or luminous burnt red. This change in colour proved to be unpopular and the B2 sold nowhere near as well as the B1. There were very few other differences made to the B2. The front brake calliper was reversed to the back of the fork leg and the front master cylinder was changed from a round item to a triangular one, they also made some changes to the electrics, swinging arm bushes and carbs. Then in 1979 the B3 appeared with a change back to the original paint colours.

Back to the present. A new rear tyre and flasher relay secured the mot, and with the cheap classic insurance it soon had a new tax disk. The riding began, but not for long as a bad misfire soon ended the honeymoon period and the enjoyment. The bike was hard to start, unpredictable in traffic, and backfiring for England. So I changed the plugs and fitted new carb to airbox rubbers, and this sorted things for a while. She still misfired though, and it got worse the hotter she got so it was time to book her in for a proper going over at the local garage.

The misfire turned out to be one of the coils breaking down under load, and getting worse as it warmed up. This wasn’t helped by the fact that the carbs were full of sh…. dirt! And one had some water in it. Condensation maybe? We will see. 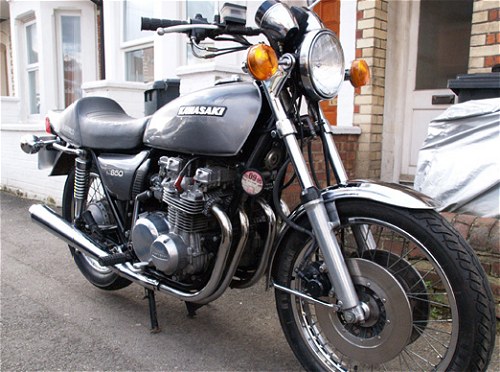 So now the KZ runs great; smooth and predictable in town and full of legs on the open road. The braking is very nice with the twin disk front combined with drum rear, and it really is hard to believe that she is 28 years old. Some of the more observant amongst you may have noticed that the colour has been changed to a rather fetching silver and the seat is an aftermarket sporty version, I may well change the paint, but think I will keep the seat.

So I guess you are wondering why I never bought a Z900. Well for one thing, have you seen the price they go for? Mind you it is a lot of bike for the money, but these 650s are just such good value. Some of the parts are getting a little hard to find, but there are loads of companies out there willing to help you track down what you need. I have bought parts for mine from the UK, the US and Germany; it just takes a little work, but then it would be boring if it was easy.