Easy to work on, good handling, but infested with an electrical gremlin. Is Mark White really talking about a Kawasaki Zed One?

What’s one of the commonly-held attributes which unites classic bike owners, no matter what sort of classic they ride? It has to be pride of ownership, and Mark White of Wiltshire is certainly proud of his 1976 Kawasaki Z900.

Rather than go the complete rebuild route with a restoration project, he paid £3200 in 1996 for a good looking machine which had only covered 17,000 miles. It wasn’t perfect, but it was neat, running well and largely original. The Zed still wore its original green paintwork and good chrome mudguards, and had kept its standard twin discs and original brake hoses. The standard exhaust pipes hadn’t stood the test of time, however, and in their place there was a new Marshall 4-into-1 system.

After 20 years on the road, the wheels were beginning to look the worse for wear, so in 1997 Mark had both fitted with new chrome rims and stainless steel spokes (cost £185). Apart from that one job, Mark does all his own servicing and maintenance work on the Kwak and it’s not as complicated as you might think. ‘If you take your time then it’s a straightforward bike to work on,’ he says.

Mark prefers the look of the shorter US mudguard rather than the long one designed to cope with British winters, so he fitted a secondhand American one for £40. The flexi-rubber front brake hoses were replaced by stainless items, which with all the banjo bolts and washers came to £70. Voila! A bike to be really proud of; functional, yet reasonably original. 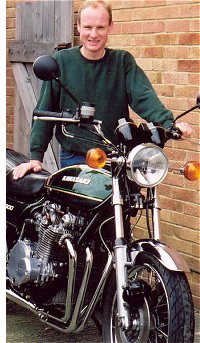 Mark’s not shy about the Kwak’s faults, mind you. ‘The Z900 voltage regulators are crap!’ he explains; ‘and very expensive at £145.’ The problem caused by over-charging kept repeating when the bike’s coils failed, and it took much searching for Mark to locate the culprit. Sourcing a heavy-duty replacement cured the coil conundrum; ‘Since I fitted a Z1000J regulator I had no further problems with over-charging. And I also bought a volt meter for peace of mind. But this is the one thing I’d have liked to have known more about before it bought it, the electrical system.’

The Zed gets used for a bit of everything — touring, rallies, bike runs, even commuting now and then, and Mark reports that it goes as good as it looks. ‘The performance is great and the handling is not so bad as some people make out. The style and design of the machine is way ahead of its time.’

So does he have plans to further enhance its capabilities? ‘There are many performance parts that can be fitted to a Z900, from big bore kits (up to 1400cc…), Mikuni flatslide carbs, oil coolers, modern rear shocks, brake kits and such. But I like my Z900 just the way it is. I think that if you change them too much you may just as well buy a modern copy, like a Zephyr or a ZRX.’ 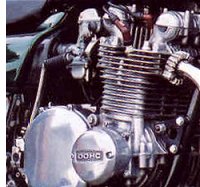 So Mark’s more than content with his 1970s technology, and there’s a hint of pride when he talks about how the Kawasakis performed on the track back in 1973. ‘There were three Z1 900s at Daytona International Raceway; two were in standard trim and the third was fitted with a fairing, a 4-into-1 exhaust and bigger carb. They got the world 24 hour speed endurance record — 2630 miles at 109.6mph — plus the world 10km speed record at 150.8mph, and the world 100km speed record at 141.4mph. All the bikes never missed a beat during the full 24 hours!’

Yet even though Mark is obviously impressed with his Zed’s prowess, a wider range of classic bike has been appealing to him recently. It’s a slippery slope once you get started… ‘I’m becoming interested in British bikes of the 1970s after reading all about them, and have been going on classic bike runs and talking to owners of these types of machines.’ But before Mark gets embroiled in the delights of the traditional parallel twin, he has an important question to ask RealClassic readers and riders: ‘Is there a British bike which is as good as a Z900? That’s what I want to know!’