In 1990, a one-man-band race team in New Zealand attempted to take on the rest of the world in the battle of the twins series. The Britten V1000 was the result, and this DVD tells the story of the bike and the man behind it…

Britten started work on his own racing motorcycle in the late 1980s, creating bodywork for a bevel-drive Ducati. Unable to make the Ducati motor reliable enough for regular racing, Britten searched for a replacement and, after trying a couple of local alternatives (there aren’t too many motorcycle manufacturers in NZ…), decided to build his own.

This film picks up the story of the Britten V1000 and its development at the start of the 1990s. Britten designed the bike from scratch with a view to taking on the factory teams which dominated
America’s Battle of the Twins at Daytona.

We see John Britten in his home workshop, creating the shape of his racer out of wire and then painstakingly building up the bodywork from lightweight carbon fibre composites. Britten’s design used the engine as a stressed member and so was effectively ‘frameless’, and he pushed the boundaries of the use of carbon fibre to include the wheel rims, fasteners, front forks and swinging arm at a time when this material was scarcely seen, even on the most expensive prestige motorcycles.

The V1000 was remarkable in many other ways; the shock absorber lives not at the back of the bike but in front of the engine. The radiator was located under the saddle. Britten utilised a sophisticated (for the time) data management system which recorded what was happening in the engine. Very few components came from the parts-bin shelf, like the tyres, monoshock, brakes and gearbox. Almost everything else on the V1000 was conceived in Britten’s mind, and then turned into reality. 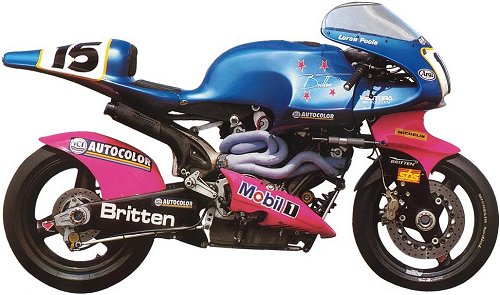 A quietly spoken man, Britten played down the number of hours and the amount of effort he dedicated to the bike’s design. His friends, who joined him on turning a dream into reality and spent much of their own spare time in his workshop, are happier to talk on camera about Britten’s talents, skill and determination. He designed the engine, drew his own blueprints and even cast his own steel (there’s an entertaining sequence about heating and quenching metals – don’t do this at home, kiddies!). To make the most of various racing regulations Britten built two versions of his engine, one at 1000cc and an 1100cc five-vale variant which output around 170bhp.

The film then follows the Britten team as they raise funding with a European partner and come to the Isle of Man to race the TT circuit. It doesn’t flinch away from the stark truth of motorcycle racing – that accidents happen and not everyone walks away from them. Britten talks frankly about dealing with a major incident, and we hear from the wife of one racer who shares her concerns every time her husband takes to the track. This isn’t a fairy story, it is real life, and the film makes that patently clear.

With racing successes accumulating, Britten went on to build ten V1000 machines before his death from illness in 1995. This DVD makes it obvious that when John Britten died, the world lost a creative and dedicated motorcycle designer. Given enough time and factory financing and he might have been building the mainstream bikes that we see in the dealers today.

This film has been available on tape for some time, but now can be bought in DVD form. It runs for around 90 minutes and features some extras including on-board footage at the Isle of Man. Our copy had a bit of a problem with the sound balance which meant that the backing music was rather too intrusive and the dialogue was hard to hear – but even with that handicap we were able to appreciate Britten’s accomplishment.

The film also didn’t hide the harsh truths of motorcycle racing, or the practical problems of building a unique machine on an extremely limited budget. The film’s honesty makes some of the moments – the first race success, locating suitable engine components in a strange country on the evening before race day – all the more meaningful. It’s hard to see how any motorcycle enthusiast could fail to be moved by the story of John Britten and his remarkable home-built motorbike.

‘One Man’s Dream’ is available on DVD for £18.99 plus delivery from: www.manx shop.com/product.php?id_product=45

There’s more info about John Britten and his bikes at: www.britten.co.nz