If you can’t elevate your classic bike to get at its underside then Andy Bone has a suggestion: borrow a trick from the classic car crowd. Better than laying on the ground, any day!

Some folk say that a man’s shed is an extension of himself, whether it is a shed on an allotment, a shed at the end of the garden, or a shed full of bikes. Frank’s shed, as described in the July issue of RealClassic magazine (RC63), is I expect like Frank, big and open, and uncluttered. In the article Frank described the benefits of a bike-lift, whether a full hydraulic bench or the more simple scissor type.

Now, my shed is highly cluttered, because my two bikes, a 750 Commando and a C Series Vincent Comet, have to share it with three lawn mowers, two bicycles, a large weighing machine (don’t ask, it would take too long to explain), countless gardening appliances, ladders, a redundant fridge and a redundant washing machine, and much more.

There is not much room for a bike lift, especially as there is a lot of coming and going through the shed, so there has to be room for things to be moved in and out all the time. Given that it is much easier to work on a bike when it is at chest height, I thought about the problem and rather than lifting the bike up, I thought an equally good answer was to stand in a hole.

I therefore created an inspection pit in the middle of the garage floor. 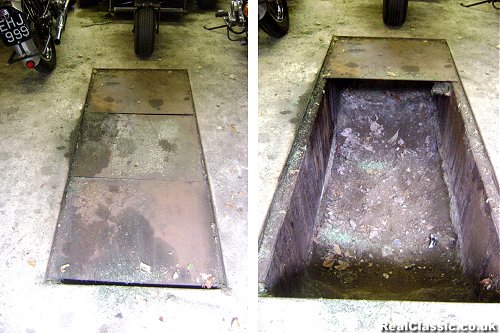 No, one can break through a concrete screed without too much problem and in my case I made up a rectangular steel shell to fit inside the hole, and dug down to the depth I needed with a pickaxe.

My wife was convinced I had plans for her future as the hole grew, but so far it remains just that, a hole. She is however on her very best behaviour.

Because heavy things run over the hole, I cut up three 5mm steel plates to fit on top, in a recessed ledge formed into the shell.

Now that the pit has been in place for a number of years I can certainly recommend it, for the following reasons:

1. It takes up no room whatsoever, and cost very little to make

2. One can either park a bike across the width of the pit, thus being able to work on both sides very easily, using the side-stand for support (see above),

3. Or one can stand the bike on its centre-stand at the edge of the pit, swivel it round, and have perfect access to either of the wheels, front forks, swinging-arm, etc, which are then in effect hanging in the air. One just needs to make sure the bike is secured on the other end to prevent it toppling into the pit. I have a handy 56lb weight for this purpose. 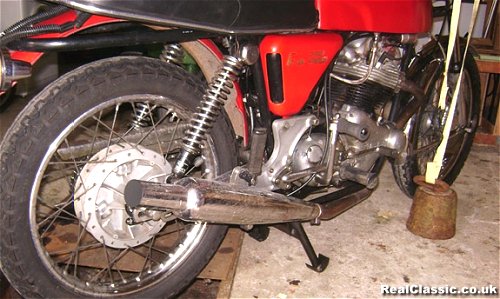 4. One can sit on the side of the pit rather than stand, if one so wishes, and work away with all one’s tools very readily to hand. 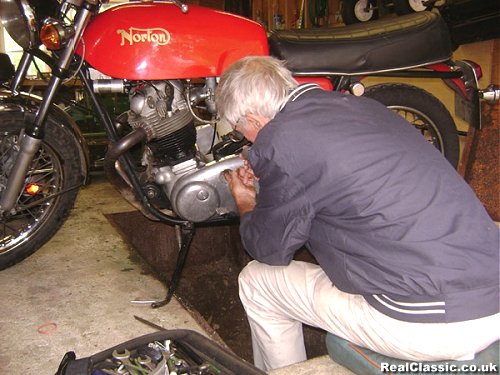 5. If one has work to do on a car, (yes, horrid things, I know), it is so much easier to work on them from underneath for so many maintenance jobs. Much safer than when one is relying on a jack, for example.

It will be noticed from the pictures that the bike in the ‘repair’ position is my Commando. RealClassic magazine readers with good memories will remember my contention that there is no better classic bike than a Vincent Comet, which, among other things, NEVER GOES WRONG. For that reason it was not used in the ‘repair’ role, because clearly that would have been a put up job. If one’s only bike were a Comet there would be no need for a pit, or a lift. 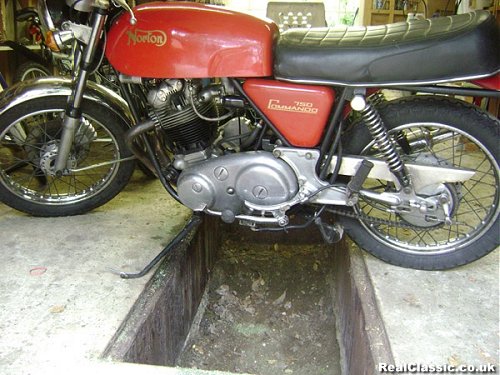 So, for those of you without the space for a lifting device, get digging!