Frank Westworth muses upon the meaning of magical metal lurgy…

I love a good joke. And before you jump in and shout ‘LE Velocette!’ or ‘rotary Norton!’ I should say that I like my jokes to make me smile, not induce a sudden need to crawl away and hide in a damp corner.

Down here in the West Country, where I while away my declining years and seek for amusement galore before it is all too late, the best jokes seem to be the most subtle. Two favourites are farmers taking their Lamborghinis for an amble down busy and popular country roads for no reason other than to enjoy the clear roads ahead and the brilliant blue skies overhead. That is a great joke. Almost as great a joke as the astonishing ability of the regional traffic quangos to install major roadworks on the area’s few major roads during July and August.

These jokes only work if you understand that the entire region depends upon the tourist shilling. Tourists, statistically speaking, only come to spend their shillings during the summer months, mainly in July and August. What more effective way to put them off coming for a damp British holiday, instead of flapping off to steamy Benidorm, than to impede their progress at every turn? It is comic to observe; only the recovery services appear to benefit from the boiled-over Astras and seized air-cooled VWs which the region attracts in such cheery droves.

You had spotted that my own little joke was that the Lamborghinis are tractors, rather than cars? They cost about the same, I think.

Motorcyclists are immune to these jokes. Classic motorcyclists like you and, indeed, me especially so, because the notionally 6-Volt electrical systems hanging around our chosen relics would probably not power a satnav system. If you, like me, use mapnav, then there are hundreds of miles of empty back roads which are a delight for the elderly motorcyclist and his ancient machine. If not … then enjoy your filtering.

But we are the butts of our own jokes, we merry motorcyclists. We appear to enjoy a good panic at every opportunity. To achieve maximum panic we need to read tales of scary horror in the motorbicycling Press, and we need to believe it … which I find difficult but which others of my acquaint can achieve with ease. I know this because they bombard me with outrage at every opportunity. Which is the downside of modern instant communications, like email and Facebook, which I otherwise enjoy.

In particular, we crave end of the world shock stories, and the ethers buzzed in a spectacular fashion when we learned from screaming headlines that leaded fuels were to vanish and thus destroy our classic engines before our very eyes, even if we never run those engines and do in fact rely upon our Honda Deauvilles … which will run on anything which smells a little like petrol and which need no lead at all.

Sad souls like me pointed out that most of our classic engines were designed when fuels were more dodgy than they are today and will still work fine… but you have just read the sound of something falling on stony ground.

The next joke is that we then rush out to invest in The Great Cure, spending small fortunes on miracle cures to delay the end of the world as reported in the Press. The best of these are the magic potions which fix our fuels. I was a chemist of sorts, once upon a time, and I cannot recall how a metal like tin will dissolve in an organic solvent like petrol. So I could not understand, dim that I am, how dropping lumps of mysterious but magical and certainly effective tinny metal into your (already metal) fuel tank would prevent pre-ignition. Good joke…

My feeble knowledge of rudimentary organic chemistry has taken another knock lately (there’s a Frank W joke there; try ‘knock’ and ‘pre-ignition’) with the headline revelation that the addition of ethanol to fuel will dissolve metal components in my fuel system. So folk with more understanding of such alchemy than I rush out to add mysterious miraculous potions which somehow and in some unspecified way will protect our insoluble metals from this. My mind does indeed boggle. 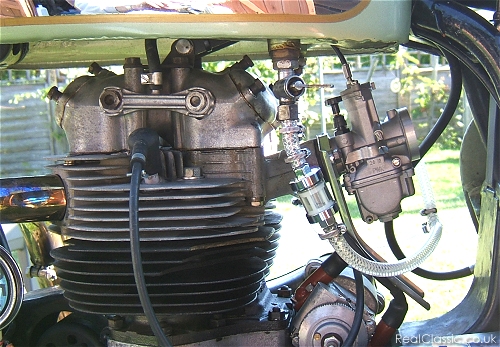 However, ethanol is an excellent solvent, if not of metals. It can and it will attack plastics in the fuel system. My very own Norton needed its fuel filters replacing. No magical additive will do that for me. A filter costs about two pounds (although I bought a pair at £6 each because they looked nice … even though they’re invisible behind the side panels). And the ethanol will absorb water from the atmosphere, which is why 10% ethanol fuels often have a lifetime of ninety days or so. If you’re not going to ride your bike for the next three months, drain its fuel and store it in an air-tight container. Or pour it into your Honda Deauville, which will savour it. It isn’t hard. Or buy a magic mixture and complain to all your friends. It’s up to you.

The biggest joke of all is that so many of us spend so much time complaining and panicking and being generally unhappy about so very many things that we forget that riding bikes is fun. We need more fun, not less. So ride more, complain less, and if aliens beam up your grandmother or ethanol clogs your carburettor, say a prayer for gran and fit fresh filters. Then ride some more.

Rain is good for you; water makes lions strong, as my mother used to tell me when I came home drunk. The old jokes are the best.