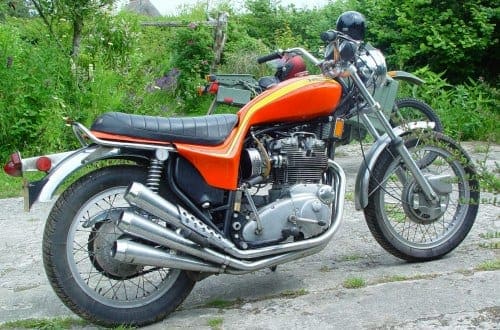 An ongoing tale, which as yet has no end in sight, about a girl. And a motorbike. And a misfire! Rowena Hoseason loves her Hurricane but doesn’t get to ride it much…

Once upon a time, my dream came true. I have odd dreams, and this one involved a bright orange motorcycle. Said tangerine dream was one of the few British bikes which appealed to me in my teenage world which was filled with oriental excellence. Didn’t know the first thing about the triple, but I liked the look and the sound of it. Then about eight years ago that dream came true, and a Hurricane blew into my life.

So a couple of years back, when we last had time to be foodling around with motorcycles for fun, we made a semi-serious effort to get the X75 genuinely roadworthy. This bike was affordable (unlike many of the breed) because it hadn’t seen too much in the way of TLC for a few years.

Repatriated from the States with less than 10,000 miles on the clock, and reintroduced to the biking world by Greenlooms Classics of fond memory, it looked to have once been fixed-up with whatever was to hand. And plainly, some of the things which had been to hand were not entirely suitable! (Most of the pics you see here are of it in its pre-tinkering state, so the photos are a bit mucky and so is the bike!). 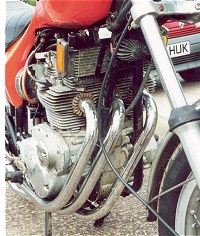 The biggest problem arrived last – and resulted in the Hurricane being unceremoniously stored in the shed until spring. The bike didn’t run right. Get it onto the open road and give it some waft and one of the three cylinders immediately went to sleep and it stumbled along on two pots. Not good.

The second biggest problem was that the Hurricane hardly stopped. The front conical (no, it wasn’t ‘comical’: there’s nothing funny about a sudden lack of stop) hub brake gave me kittens every time it was applied. Going backwards (when it didn’t work at all) it gave me kittens, puppies and probably little woolly lambies, too.

We stripped and cleaned the drum out, making several dozen spiders homeless in the process, and fitted a new brake cable. It made, ooh, about a whole inch of difference to the stopping effect – and to top it all the new cable was way too long.

The overlength cable was a nuisance but that’s what you get for buying a replacement at a jumble without having the original in your hand. The feeble brake was more of an irritant: the Bigger Half’s T25 has a vicious version of exactly the same stopper, which brings it slewing to a halt with only a whisper of a touch on the lever. Why was the one on the X75 so awful?

And the other biggest problem was that most of the original components were decaying before our eyes. The parts which weren’t quietly rotting were scavenged off another bike altogether and really had no place on one of Mr Vetter’s finest.

We fixed what we could; fitted replacement downpipes from Burton Bike Bits instead of the disease-ridden set which previous afflicted the bike, and then swapped a set of proper Hurricane handlebars for the daft cow-horn horrors which with it had arrived. 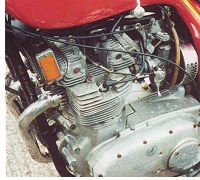 But even with excellent mechanical assistance we couldn’t get the orange monster to run reliably on all three pots, or stop with any certainty, so it was obvious that we needed help.

Richard Darby’s Hurricane is an tribute to his both mechanical expertise and his dogged determination. So Richard was the natural choice: if anyone could make my X75 excellent once again, it would be him. 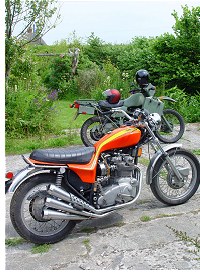 Mind you, there is a downside to asking a perfectionist to sort out a scruffy oik for you. When the list of what was wrong arrived it was like receiving your kiddie’s report card and discovering that the Could Do Better in every single subject. In fact, from Richard’s report it looked like the Hurricane was in danger of being expelled!

So we had to tone down some of Mr Darby’s natural enthusiasm for the project (‘I’m sure we could fit a disc brake… just need a new fork leg… oh and yokes, of course… and then there’s the headlamp brackets…’) and his desire to make everything better than new. Crazed chrome and faded paint I can live with. Just make it run right, Richard – and make it stop!

Before he could tackle either of those problems, Richard had to cure a dangerous weakness to which the X75 is prone. A nasty crack lurked on the bottom yoke, and this is a common problem as these bikes age. The redoubtable TR3OC occasionally toy with the idea of building a batch of replacements, and then I think an American leaps up and wails: ‘product liability!’ and the whole plan fizzles out. So mine were welded up and machined smooth and now you wouldn’t know if you didn’t know. (And then that nice man Phil Pick of Triple Cycles offered me a BRAND NEW set of yokes, for only an arm and half a leg. How could I refuse? So I now have a spare set).

Then there was the matter of the lumpy running. I learned the lesson in my youth that one carburettor is problematic, two are trouble and four are generally fatal… so I guess that having three was always going to be fun (odd how I don’t miss the days of trying to balance a bank of carbs from a Suzuki UJM). At first we thought the job would simply be just to strip, clean and re-assemble the carbs, and then Richard pointed out that the middle one wasn’t a left-hand item as it should be. In fact it wasn’t even intended for a Rocket 3 or Trident – it came from a 2-stroke and boasted a 130 main jet! No wonder I couldn’t reach the tickler.

The springs in the carbs were all far too stiff and the slide assemblies had been put together frontwards-back, so the whole lot could have jammed open at any time. Gulp. Lightweight springs went in and a new, proper Amal joined the other two. The throttle linkage, too, was incorrectly assembled; ‘it was an accident waiting to happen,’ said Richard cheerfully. Then he painstakingly rebuilt the carb bank so that now it looks good enough to eat your dinner from, if your dining habits are that eccentric. But even after all effort that the throttle still contrived to stick open on the bike’s first ride – the cable caught on the right-hand fuel line. Good grief! 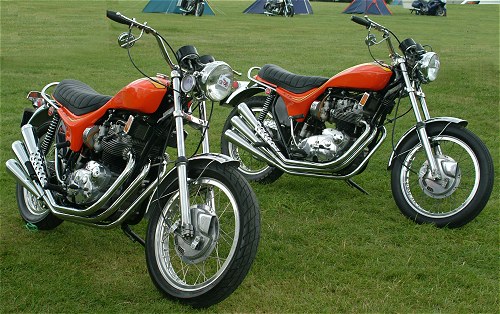 The next job was up at the front. A combination of philosophy and finances did not permit us to go through with the grand project of fitting a disc brake (it would have altered the overall character of the bike, even forcing a change in steering geometry, and I’m not sure I want to tinker with what it is otherwise a remarkably standard bike), but no lack of money was going to excuse the scabby fork stanchions. Rusted and pitted and pitiful: they just had to go. New stanchions were fitted along with new seals and fresh oil. Fab.

Then there were a gazillion little jobs to be done, bits and pieces which had been crying out for attention – for years – to no avail. Richard heard their pleas, and set to work. He repaired the wiring to the headlamp and switches. Fixed the broken clutch inspection cover and replaced the oil seal behind the points cover. A broken bolt behind the rocker box needed a helicoil to remove and replace it. The handlebar clamps were wrongly positioned. Another new throttle cable – the right length this time – arrived, along with a new clutch cable. And although we decided not to replace every rusting nut, bolt washer and fastener for the time being, I note that a few rashes of fresh stainless have broken out in places, no doubt where the old items were just too awful for Richard to bear! Then fresh oil went into the engine and an MoT certificate went into the file.

The last job was one of the most important – getting a fair bit more out of that recalcitrant front brake. Richard discovered that the cable wasn’t connected to the drum properly which won’t have been helping matters, and he magic’d up a set of extended brake arms which were duly fitted. So now there’s more leverage for every subtle squeeze and the force is transmitted directly to where it matters. This is progress indeed!

‘You also need to do something about the rusted engine bolts, and the corroded heatshield, and the silencers which are going, too, and the mudguard, and the rear light mounting, and the rear hub and spokes, and the kickstart, and the air filter, oh and you’ve got the wrong steering damper knob and you’re missing badges from the seat knobs, and…’

Whoa! Enough. For now. Richard had appeared to have achieved his primary mission – getting the X75 properly roadworthy – and the cosmetic stuff would just have to wait. It was time to do some riding and see if I actually liked the dratted thing… 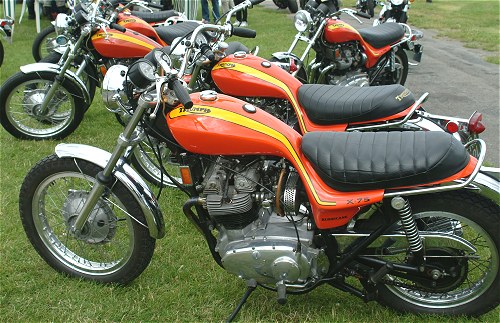