After prepping his vintage motorcycles so they’re ready to be ridden by the RC Crew, Humbernut heads to Founder’s Day and enjoys a grand day out…

Founder’s Day is organised by the Taverner’s section of the VMCC to celebrate the founding of the VMCC over fifty years ago. It is an invitation to bring along your vintage or classic bike and display it in the arena. Bikes can be entered for the concours prizes for different categories of machines. The events are themed and this year’s theme celebrated the centenary of Velocette motorcycles and a large gathering from the Velo club could be seen, almost next to the RealClassic stand.

Different bike clubs also had stands such as the BSAOC — lots of Goldies here, Triumph Tiger Cub Club — sharing the same patch as Real Classic. A very good autojumble for vintage stuff is run with the event and it is indeed one of the best you’ll find all year.

I set my natural alarm clock for 4am but it wasn’t working too well and I woke a little early at 03:30. While I made a cup of coffee I gave Joe an early morning wake up call and an early warning that I would be picking him up in half an hour. The weather forecast had forewarned of wet weather for the area south of a line across the country from Manchester to Hull, but where we were it was a pleasant morning; cloudy but dry and mild. I had packed all of my rain gear and a spare change of clothes just in case it got really nasty.

I picked up Joe in Sunderland and we set off on the long trek south at 04:30. I had heard that the gates of Stanford Hall open from 08:30 and I wanted to be there by then if I could. As it was a Sunday, and most normal mortals were in bed, the traffic was superbly light and we made good progress down the A1 then across the M18 to join the M1 where we exited at Junction 20 to find the way to Stanford Hall clearly signposted. We arrived by 8am and after a slight hiccup got into the site and looked for the RC pagoda.

After wandering around the site we were unable to find any trace of the RC crew. An enquiry with one of the Taverners’ section officials revealed that RC was sharing the plot with the Tiger Cub Club and we were shown where their plot was. We were the only ones there so we set about getting the bikes out of the van before anybody arrived. Joe went for a stroll about the autojumble while I stayed with the bikes, and just as Joe came back Rowena and Frank turned up so we set to helping them erect the RC pagoda.

The rain was so far holding off and it was really quite pleasant but it was still early yet. There was still a bit of work to be done setting up the stall and when it was set up we could start to play at being vintage motorcyclists.

My intention was to let anybody from the RC website have a ride on the flat tanker and first offer was to Frank who didn’t take long to persuade so I fired it up for him. Now the nice thing about the grounds at Stanford is that there is plenty of private road on which to have a short ride round, although it is not really long enough to get into top gear. Second gear is a distinct possibility on the sidevalve Humber and Joe’s Coventry Eagle. 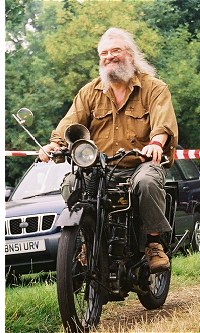 Frank went off on a jolly for a few minutes on the sidevalve and came back looking a whiter shade of pale. He had discovered that vintage sprung saddles are not sprung at the front! They pivot about the front so it is relatively solid here and not the best of places to have your meat and two veg land after going over a pothole in the grass…

Once Frank had regained his composure he was treated to a ride on Joe’s fantastic Coventry Eagle Silent Superb. What a misnomer if ever there was. ‘Silent’? No way! However what it lacks in power and silence (this thing would never make a ‘stealth bike’) it more than makes up with good looks and character. This is Joe’s first restoration and it looks great.

Things were still relatively quiet and the rain hadn’t started so Frank tried out the Humber 350 OHV next. I think he was impressed with its liveliness in comparison to the sidevalve.

Once things got well under way and a few more RC members turned up there was a steady stream of volunteers to give the sidevalve and the OHV a try. But by now the rain was coming down fairly steadily and although it didn’t stop people enjoying a run about on the bikes, it did stop me from taking as many shots of people riding them as I would have liked. 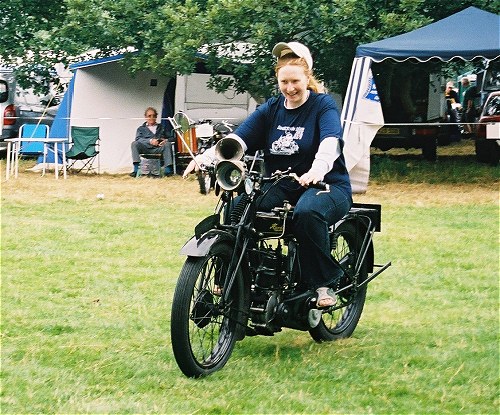 Rowena was a little bit concerned* about riding the sidevalve but after a bit of persuasion she eventually got on it and went for a short run around the grounds.

All day a steady stream of virgin vintage riders tried out the bikes and the bikes performed more or less faultlessly all day. It gave both Joe and myself a lot of pleasure to be able to give people the chance to ride an old bike, it certainly should be something every biker tries just to see what they are missing. I only wish that the weather had been kinder and we had two or three miles of nice country road where people could try out the bikes properly. The only real way is to take them out for a run of 60 miles or so. By the end of that sort of run you are well into driving them and everybody I know who has ridden a bike on a run like this comes off smiling and wanting to go again. 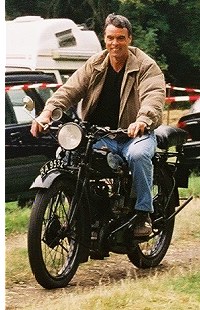 The parade of vintage and classic bikes was held in the parade ring in the early afternoon in pouring rain. I managed to grab Jim Rendell and got him onto the sidevalve to accompany me round the ring whilst I drove the OHV.

We had to wait for a good 10-15 minutes while other bikes went before us and the OHV started to get hot and it started spitting back (probably just needs the plug and points sorted after the previous troubles with the Mag) so I shut it down while I waited my turn, but the old sidevalve just sat there ticking over beautifully while we waited.

On signal from the marshals I started up the OHV and Jim and I did our round of the parade ground. Meanwhile Joe had teamed up with another Coventry Eagle to do his lap. 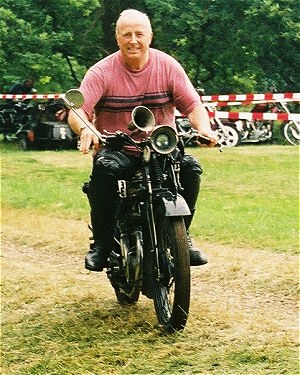 When we got back to the RC Pagoda Joe told me he had spotted a Humber gearbox on one of the stalls so I went off to investigate. Sure enough I found a 1920’s 350 Humber gearbox, complete with clutch, for £65. It looks to be complete and in good condition apart from the kickstart shaft having been sheared of flush with the outer casing. I also picked up a nice Miller gaslight and mounting brackets to suit along with a gas generator for the lights. Where else would you pick up this kind of thing at an autojumble?

After my foray round the autojumble the rain seemed to be coming down even heavier and it was time to think about leaving for home. The trickle of people leaving had grown to a steady stream and we were beginning to feel the effects of cold having stood about all day in the rain, so after helping Frank, Rowena, Mike Powell, et al get the pagoda packed away we loaded up the bikes into the van and set off North for a very wet couple of hours driving in the rain, before eventually seeing dry roads as we headed into north Yorkshire.

I certainly enjoyed the day out, I know Joe did. I hope that everybody who came to the RC stand and had a try out on the bikes enjoyed it too. Will we be doing the same thing again? You bet. Don’t know where, don’t know when — but for sure we will be doing it again.

*Understatement of the century. Terrified, nay, near turned totally tharn at the thought of wrecking – I mean riding – a bike with an accelerator lever, hand gear change and 1920’s brakes. Need not have worried about the brakes. Better than the ones on my Dragonfly!

All of the RC riders who took a turn on Humbernut’s bikes and Joe’s Eagle owe the fellas a very big Thank You. For many of us these were by far the oldest bikes we’d ever ridden and you were extremely brave to let us loose on them. THANKS.

A round of applause should also go to the VMCC Taverners’ Section who organised a superb event and didn’t let the bad weather get to them. The Taverners’ meet on the second and last Thursday of each month at 8pm, at The Horse and Groom in Queniborough, Leicestershire.