Part of the pleasure in going to a classic bike event is getting your machine ready to ride. Always up for a challenge, Humbernut doubled his trouble and opted to get two vintage motorcycles ready for Founder’s Day…

It was my intention to have both Humbers available for the 2005 VMCC Founder’s Day so that Frank and Rowena could have a ride on them, and so could anybody else from the regular RC mob who wanted a go. Last time I had the OHV out I ended up taking it home after a problem with the valve gear, when the inlet valve gear support column securing bolt unscrewed itself. But the clutch cable had snapped on the sidevalve and the one on the OHV was swapped over to allow it to finish the run. This had to be sorted out — I was due back from a trip offshore on the Wednesday evening and the event was on the following Sunday at Stanford Hall. This didn’t leave much time to organise transport and to get the bikes fixed in time.

While I was offshore I ordered some cable-making gear so that it would be at home in time for my arrival. However the best laid plans, etc… The cable-making gear hadn’t arrived and I was beginning to think the lack of cables was going to prevent us from going. However Stilljoe knew of a shop in Newcastle where I could at least get the ferrules or end caps that I needed.

I still needed outer and inner cables. Johnthevicar provided the solution to that one by giving me two or three broken cables which were in good condition outer-wise, and although the inner cable had snapped it didn’t appear to be frayed or corroded. A quick check revealed that the best inner cable was two or three inches longer than required which meant that I could cut it back to fresh new cable and solder on the nipples required. Unfortunately I had lost the nipple that anchored the cable in the clutch handlebar lever so I had to make a new one before I could start. So half an hour’s work saw a new cable fitted to the sidevalve and the original one transferred back to the OHV.

The next job was simply a matter of tightening up the loose bolt on the valve gear support column and re-adjusting the tappet clearance, and this was done on the Friday. All that was left to do was to give the bikes a test run and pick up the hire van.

‘Maglitas are crap.’ I have been told that many times, but this bike came with a very early 30 watt output ML Maglita and I was determined to get it restored and supplying lighting power and sparks, as per it was intended way back in 1929. I had the Maglita restored over two years ago and fitted it quite recently after replacing the headlamp switch and wiring in a small battery to the circuit. Now I have not really had time to do an awful lot of fettling since it was fitted. On its one and indeed only major run out at the Burton Parade I had some problems with a slight misfire which developed at relatively high RPM. I thought that this could have been a fuel problem and left things alone.

Next time I went out on it was worse and I discovered that the repaired end cover (which had been broken when in the post) had cracked and water had got into it. I cleaned the moisture out with tissue and the improvement was dramatic. However when I took the bike on the Northumbrian Gathering three weeks before it was an absolute pain in the backside, misfiring and coughing and spitting until the trouble with the valve gear put paid to my ride. 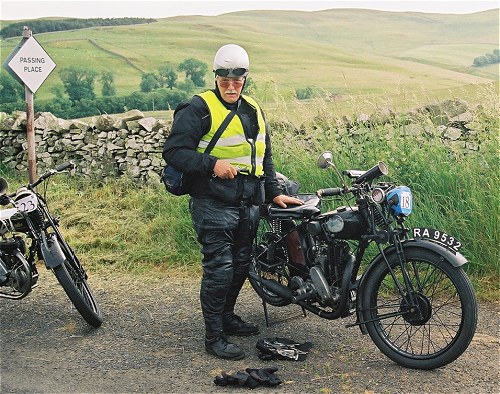 Saturday morning and it was time to test out the bikes with Stilljoe. The OHV was a pain in the backside with a reluctance to accept any advance of the timing without a great deal of spitting and coughing. At this stage I suspected the timing had slipped so we opened up the timing chaincase and checked the ignition timing, re-set it and tried it again without success.

By now I was seriously running out of time to get the OHV running for Founder’s Day but the only solution I could think of was to swap out the Maglita for the ML magneto that was fitted to the bike before I put the Maglita back on it. This is a job that is really difficult as manufacturers in the Thirties didn’t give too much thought to ease of access to bolt heads, etc, and there are at least two real awkward little beggars right under the magneto platform that are sods to get at.

With the application of a great deal of profanity the Maglita was removed and the ML Magneto installed. Great, thought I, just one swing of the kickstart should do it and it will be ready. Twenty swings later and there wasn’t a sign of life from the old clunker!

By now it was five in the evening and it was time to pick up SWMBO from work. I resolved to leaving the OHV behind. But after tea I decided to take one more look at it to see if I could do anything to get it running. A look at the points revealed some oil on the contacts which I know is not good, I think this may have gotten onto them when in storage. 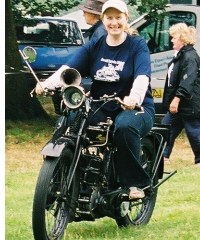 Anyway I cleaned the points with some wet/dry paper and I closed the plug gap as it was a little bit too large. A check showed a good spark at the plug when it was laid on the cylinder head.

I fitted the plug, tickled the carb and gave the kick start a good swing — and the engine gave a lively pop indicating that somewhere I had a spark. At the second swing it fired into life and revved quite freely.

That was it, no time to give it a test run as it was already past eight pm. It would just have to go as is.

Joe loaded his Coventry Eagle into the van, then drove over to my place where we loaded the two Humbers along with all my riding kit. I took Joe back to his place and returned home ready to get some sleep. By now it was getting fairly late and I had an early start next morning.

Next: so what is Founder’s Day like, then? And what happened this year? 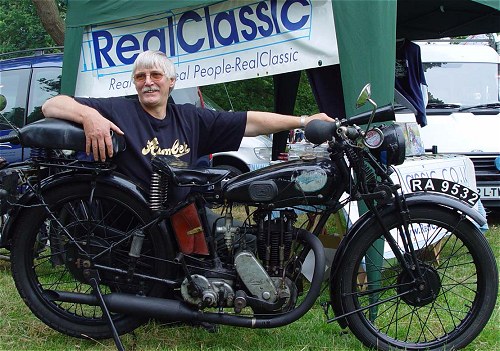