When you develop a fascination with a rare breed of vintage motorcycle, you just can’t stop finding the things. Humbernut unearths, adopts and revitalises another unusual machine…

As you know from previous articles on RealClassic, I am keen on Humber motorcycles and their restoration. I also like to put pen to paper by writing about my restoration projects from time to time. You may have read the features regarding the restoration of a 350cc OHC Humber and a spare sidevalve engine (many of the components for which were made in my home workshop). Information about my 350 appeared in the Humber Register – which is mainly about cars – and my email address accompanied it.

One day while at work offshore I received an email from a gentleman called Fraser Walters. Fraser explained that he was in possession of a 1929 Humber 350cc OHV sports and wanted advice on its restoration, etc. Fraser was keen to see the bike go to somebody who would be able to get the bike back into working condition and carry out a good restoration of it. Having seen my features he was convinced that I may be able to do so. I told Fraser that I was extremely interested in the bike and would call in at his place in Dronnfield, on my way back to Tyneside from work offshore Great Yarmouth, to see it.

After a long drive from Great Yarmouth I arrived at Fraser’s house to a very warm welcome. Fraser expressed a keen interest in all things Humber including Humber cars. I was able to leave him a few copies of the Register and show him some photographs of my sidevalve and the OHC model which Kevin Jones and I are restoring.

Fraser showed me the paperwork which he got with the bike; this included the log book and some original insurance documents . He then explained how he came to be in possession of the it.

At some time in the early 1970s, when Fraser was a young teenager, his next door neighbour’s brother died. The neighbour’s brother used to own a grocery business in Sheffield and delivered groceries in the area. According to his sister he used the bike on a Fridays to collect the monies owed to him from his weekly deliveries. For one reason or another the bike was put in a storage shed in 1931 and never used again!

Fraser was asked if he would help his next door neighbour to clear the storage sheds prior to the sale of the business premises. This he said he would do and it was during the clearing of the sheds that the bike came to light. along with a 1930’s Fordson van with delivery mileage only on the clock.

As payment Fraser was given the Humber (but he would have preferred the van!). The bike was taken back to his parent’s place where Fraser attempted a restoration. Unfortunately Fraser as a young teenager lacked the skills and the patience (and probably the funds) to carry it out, as can be seen from the red lead paint on various bits of the bike. The bike languished in the shed at his parent’s house until earlier last year when they had to go into sheltered accommodation. It was then taken to Fraser’s house and stored in the garage.

So after explaining all this to me, Fraser then showed me the bike… 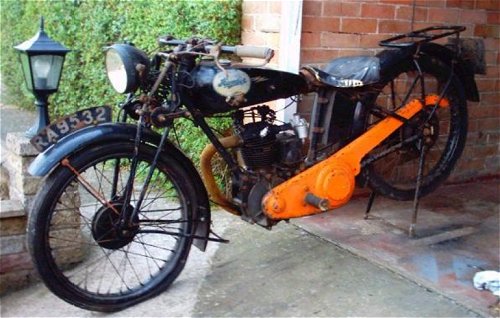 The bike was as seen on the photographs, which were taken the time I first saw it. The brilliant orange paint on the chainguard nearly blinded me. The photos paint a rather sad picture of the bike and don’t really do it justice. Considering the length of time it has been stored in a garden shed it has faired pretty well. There were a few things missing from the Humber but nothing which would present me with any problems. The missing parts were the drive chains, Maglighter drive chain, front brake rod and clevis, gear actuating rod and clevises, carburettor and timing chaincase.

It was also obvious that at least a re-spoke of the wheels and new tyres would be required (the original cord tyres were still on the rims), and a complete set of new control cables would have to be made.

The bike has electric lights fitted driven by an ML Maglighter and this also appeared to be in need of restoration. A complete rewire would also be required.

I couldn’t say no to this bike and a very reasonable deal was struck on the proviso that I keep Fraser informed of the progress being made with the bike.

Next time: nut-and-bolt restoration or get it going in oily-rag condition? Humbernut makes his decision, but what would you do? 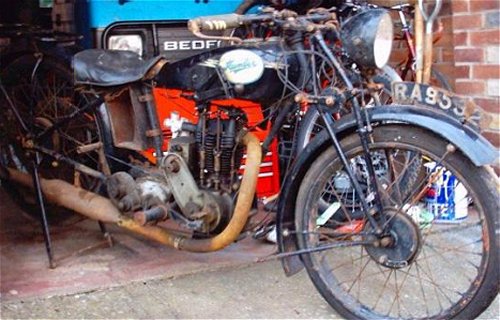