You meet the nicest people on a Honda. And Jim Peace…

Once upon a time, many years ago, motorcycle engines had proper capacities like 250, 350 and 500cc. And motorbikes knew their place. Two-strokes and Tiger Cubs were for commuting, 350s could be used for modest touring, 500s were more sporting, and 650s and thousands were really, really, fast. Everyone knew that and everyone was happy.

When the first Japanese bikes arrived in this country, they, too, stuck to traditional engine sizes. But not for long. In the early sixties Honda sent us a bike of 305cc. How much? Many of us at the time assumed this was a misprint, especially as the owners handbook was written in Japglish. It had to be a 350, particularly as it went like a 500. But it wasn’t, as we now know. And it lasted a lot longer than cynics like myself predicted. Twenty minutes I gave it, at those engine revs.

And then, ten years later, another bike with a daft engine size turned up. We’d just about got used to a BSA of 440cc, when Honda sent us a four cylinder bike, with the world’s ugliest exhaust system and an engine capacity of 408cc. Some of us turned our noses up in disgust. Well, I did. Lots of people liked them, though, because they sold like hot cakes for a while and many of them are still around. Then sales dropped off and, after three years, Honda pulled the plug. I remember saying at the time that if Honda had made it look like a smaller CB750, and given it a proper engine size they would have sold a lot more.

What I didn’t know was that they’d already done that, with a model known as the CB350-4, and that sales had been disappointing. I still believe that Honda made a big mistake in not sending any here. They sent some to North America and others to Europe, but not to us. We had to wait two years at which point the engine capacity was increased and the bike re-styled from pretty to pretty ugly. I’ve never understood why. The 350-4 was great little bike as the subsequent sales of grey imports proved.

I first saw one in the mid-1990s. At the time I was running a Yamaha SR500, a brilliant machine, but I’m a ‘grass is always greener’ biker, me. I get used to a bike after a few weeks, and lacking the wherewithal to own several, start to look for something different. Not bigger or better, necessarily, just different. I really liked the look of the little Honda, and decided I had to have one. I had to wait a while, however. As any fule no, if you keep your credit card just under the limit, taking care not to go over, the card issuer will eventually give you more money to spend. This time it took a few months, but then, flush with my extra financial clout, I went off to look for a 350-4.

My search took me to Bat Motorcycles, who were then in South Norwood, where I found a rather scruffy green one with a very noisy aftermarket four-into-two exhaust. The American ‘MOT’ sticker on the fork leg indicated that the bike had come from Rhode Island. I checked it over carefully for rust because Rhode Island, all of it, is very near the sea. It looked OK, though. Also the number plate had a ‘K’ suffix, which meant I could fit an embossed silver on black plate. In my not-very-humble opinion anyone who runs a pre-1973 machine with a yellow plate is a philistine*. The asking price of £850 was less than I’d expected to pay, so I bought it. And it was every bit as good as I’d hoped. 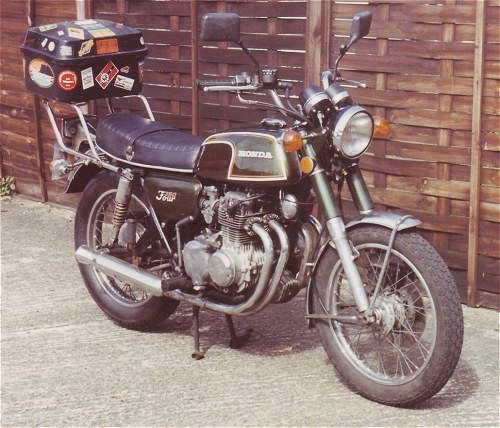 For a start, it had a five-speed gearbox, as opposed to the six gears of the 400. I have always believed that only racing bikes need more than five gears and have spent many happy miles riding a six-speed bike in fifth. Not deliberately; I just lost count. It also had a disc brake on the front, which worked well, even in the wet. The Honda was light and comfortable and fast enough for long runs. I twice took it to Holland and back, via the tunnel, in a day. After the second trip the camchain started to rattle, and on this bike, as on the 400, the adjuster stuck. But if you unscrewed the wossname, and stuck a screwdriver down the thingamabob the noise stopped. If you pushed the screwdriver too hard the engine stopped. Allegedly. I was careful not to do this.

The bike had an electric starter which worked perfectly and was a lot more enjoyable than kick-starting. It used very little petrol and no oil between changes, which I performed every 2,000 miles with good quality oil. The oil filter cover was a b*****d to get off and the bolt head got steadily reduced in size as I hammered on successively smaller sockets. The trick here is to alternate metric and AF; that way you can do it several times.

The only other problem I had was with the handlebars. The standard bars were bent back slightly on the left hand side, so I decided to replace them with some Kawasaki bars I just happened to have in the bits box. Strange, that, as I’ve ever owned a Kawasaki. Anyway, on removing the Honda bars I found that all the electrical cables ran through them and that the new ones would have to be extensively drilled. I couldn’t be fagged and decided to replace the old ones. Before doing so, however, I wedged them into a fork in next-door’s holly tree, and gave them a sharp tug to straighten them out. Perfect. Apart from the scratches on my arm from the holly, which turned septic. Be warned, if you are going use a tree to adjust motorcycle parts, and I’ve used the same trick with exhaust pipes, do not use one with prickly bits. 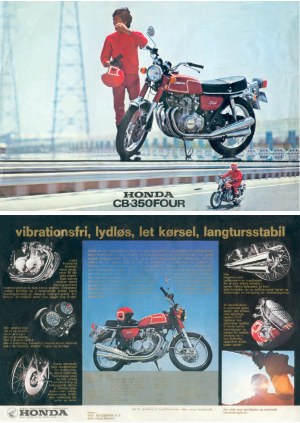 I kept the bike for some time, and really enjoyed riding it, even if it did sound a bit like a sewing machine. The exhaust was just a bit too noisy, however, especially for early morning starts, and a four-into-four original completely unobtainable, not that I could have afforded one. I could have fitted a four-into-one system from the 400, but I still think this is the most lopsided, unbalanced, ugly, exhaust system ever made. I know I’m in a minority of one here, but I think it looks awful.

I tried the old trick of stuffing Brillo pads up the silencers, but they just flew out again. The pipes were welded to the silencers for some reason, so I tried pushing the pads down from the top. That worked for about ten minutes after which they shot out with considerable force, and wedged in the radiator grill of an early Toyota RAV4, which my neighbour had just bought. Daft looking car, anyway.

After a year or so I fell completely in love with a Suzuki GT500, fickle sod, and sold the Honda for next to nothing. There are still a few CB350-4s around, and some of them have been beautifully restored.

Would I have another? At the right price, certainly.