A CBX1000 might be an awesome thing to admire in a showroom, but what’s it really like to live with? Long term owner John Hall reveals some useful wrinkles…

The CBX is one of those marvellous monsters from the 1980s which nowadays brings with it a unique set of problems. John Hall has owned four CBXs, one new and three used; ‘all of them were as-new, though’. He’s experienced both the original twin-shock version, made in 1978, and the monoshock Pro-Link faired version which was introduced in 1981. So he knows a thing or two about living with a CBX.

The main reason for buying a CBX must be its engine, and that 1047cc across-the-frame motor produces a tad over 100bhp at peak revs of 9000rpm. The high side of 130mph is a genuine possibility. Yet stopping and steering technology at the end of the 1970s really hadn’t kept pace with the power race, and this is one lardy lump at 555lb dry. The ventilated twin front discs weren’t bad at the time but now you need to make serious allowances for them if you want to travel at speed. John’s wish list for an improved CBX contained just two items; ‘ thicker fork tubes and better brakes’ which pretty much sums it up.

John normally does all his own servicing and repairs, including some accident damage work. ‘Once, because of time limitations I trusted Wharf Motorcycles of Whitchurch to replace a piston. They were excellent, and I recommend them.’ John has several suggestions for other CBX owners to make life a little more straightforward:- 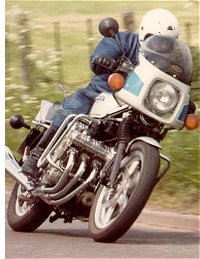 Practicality means a lot to John, and although most folk prefer the butch brashness of the original, naked CBX, John’s bikes inevitably sprouted fairings to cope with Britain’s weather conditions. Typically, Rickman was the preferred supplier here, and the protection from even a small fairing meant that John could take his CBXs on some serious trips.

However, ‘if travelling abroad, take spare alternator brushes with you’ he says. That’s because in John’s experience they tend to fail at 9000 mile intervals. Apart from that, the CBX’s reliability lives up to Honda’s reputation, even given its 24-valve, DOHC, six-cylinder complexity. ‘I’ve needed two rev counter cables and one ignition coil, spread over four bikes and more than 80,000 miles,’ reckons John.

How does he rate the CBX in modern terms? Well, the prices are ‘pretty silly’ now and there are ‘better machines available for modern traffic.’ However, John really liked the ‘smooth engine which makes it easy to balance at low speeds.’ And, of course, there’s that engine. No other bike has the same ‘visual impact of those six cylinders.’ 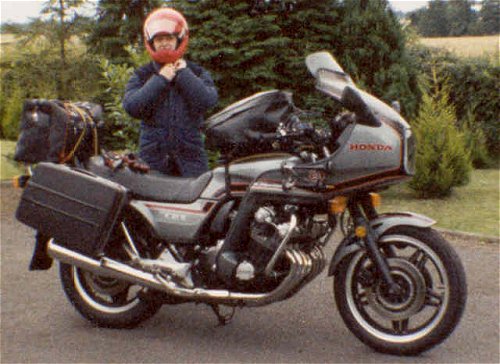 Prices silly? What do you think?