Modern marvel? Mechanical milestone? Or just another mediocre mass-market middleweight? 400 Fours were everywhere in the seventies, and now they’re back. This time there’s a Classic label attached but Martin Gelder had one first time round and isn’t convinced…

You buy your first multi-cylinder bike from the local dealer, ride it straight round to your best mate’s house to show it off, and a huge puddle of oil appears underneath it in less than the time it takes to say “Come outside and look at my new 400-Four”. Not a good start.

Still, at least the oil was clean which showed that the dealer really had serviced it before I picked it up. You can always find a silver lining if you look hard enough. So with a new oil pressure switch (bit of a common fault, apparently) and a fresh sump-full of oil fitted I was all set for a life of excitement and discovery aboard Honda’s miniature superbike, the darling of the mid-70s motorcycle press.

It rained constantly for the next week of commuting backwards and forwards to work. Not Honda’s fault, of course, but it did come as quite a surprise when the rain stopped and I found out that I’d been riding a 300-3 rather than a 400-4. I say surprise because I was filtering through traffic when the fourth cylinder finally decided to make an appearance. Well, I wanted excitement…

Turns out that this is another common fault; the HT leads fail where they are moulded into the coils. Why Honda fitted them in a perfect place to catch all the muck hitting the front of the bike is anyone’s guess, but combining them with metal “short-o-matic” plug caps was a stroke of sheer genius. You might remember the slogan “You meet the nicest people on a Honda”? Well I met a lot of nice 400-4 owners, mostly by striking up conversations about waterproofing the coils or by lending them a helpful squirt of WD-40 from the can that I got into the habit of carrying.

With the “jewel-like” Honda now oiltight and running on most of the cylinders most of the time, it was time for the discovery element of my journey. I’d never been that interested in metallurgy, but I was about to learn all about the effects of corrosion on aluminium. When a chunk of iron or steel oxidises, it gets smaller. It rusts away to a flaky mess that will eventually be dug up by an archaeologist who can reconstruct an entire Saxon village on the basis of finding a single mudguard stay. Aluminium is different; when it oxidises it gets bigger; that white dusting on your crankcases can be polished off to reveal the smooth original finish beneath.

The 400-4 is fitted with a single piston brake caliper biting onto a shiny stainless steel disc. This caliper has to have the freedom to move slightly in order to work effectively, so it’s mounted on an aluminium bracket which in turn mounts to the aluminium fork leg via an aluminium pin in an aluminium hole. Ridden in anything remotely resembling wet weather, the shiny disc brake didn’t work very well, but I wasn’t bothered because I was used to seventies disc brakes, and anyway, the bike was usually only running on three cylinders… 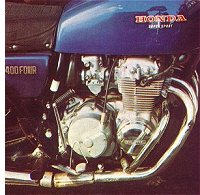 Foolishly, I persisted in going out in the rain – after bodging the coils with silicon spray and old rubber gloves – and found out that the Honda had another trick up it’s aluminium sleeve. As soon as it was least convenient, the hole in the aluminium bracket constricted slightly, the aluminium pin going through the hole swelled slightly, and the brake seized on. I didn’t notice at first, assuming the sluggishness was ignition related, but the dull blue colour of the disc and the smell of hot metal eventually gave the game away. Another common problem, this time cured with a bucket of cold water, a tap with a hammer and then a complete strip down.

I could go on about the seat base that rusts and then snaps, the suspect cam-chain tensioner, the out of balance carbs that sound like main-bearing rumbles, but my four hundred didn’t last that long. Worst of all, I didn’t miss it when it was gone; a terrible condemnation of any motorcycle.

When it was launched the CB400F was hailed as a mini-superbike, but the reality was a pleasant enough machine that was just too bland to be special. Its handling was okay, but not in the league of a Morini 3 1/2 Sport. Its performance was alright, but without the raw edge of an RD400. It did have four downpipes though, at a time when the sight of a CB750 or Z900 could still impress a bus queue of schoolboys, and the press loved it like they love the CBR600 today. The sort of bike you’d recommend other people buy, while you ride round on something a bit more… interesting.

The 400 Four was a middleweight Honda that happened to have four cylinders. If it’s a classic, it’s because it brought multi-cylindered motorcycling to the masses rather than because of any outstanding qualities it brought to the riding experience.

If you must have one, these people might be useful: