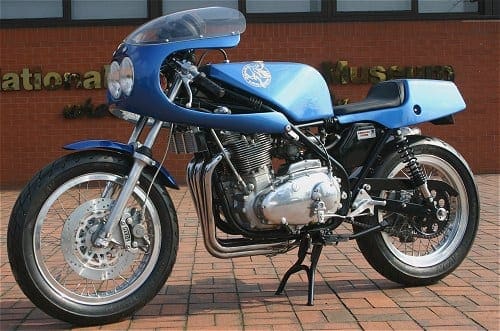 Which bike do you choose if you want an old fashioned air-cooled triple with all mod cons? This one should be on your shortlist…

There’s something about the old Beezumph triples: they just seem to beg to be updated, uprated and re-invented. The Rob North specials spring to mind, as does Craig Vetter’s Hurricane, Les Williams’ Legend and Trevor Gleadall’s Renegade (any more, anyone?). It seems that everyone wants to fit the old three-cylinder engine into a new chassis, and maybe give it a few tweaks en route. Norman Hyde couldn’t resist the challenge, and his creation was christened the ‘Harrier’.

The Harrier was born nearly two decades ago, but it still attracts attention. Last month, a Hyde Harrier cafe racer triple fitted with a previously unused Triumph T160 Trident engine, went to its new home at the National Motorcycle Museum’s collection near Birmingham.

Norman Hyde worked for the old Triumph company from 1965 to 1975, where he worked as development engineer and was involved with projects like the OHC Trident, the Quadrant, the 350cc Bandit, the 900cc Thunderbird 3 (T180) and the Norton Commando 8-Valve, before setting up his own specialist parts business. Norman has marketed the sleek, racer-style Harrier triple in kit form since 1988, sourcing the frame and other key cycle parts from Harris Performance Products.

Setting the engine well forward and reducing fork rake gives the Harrier more modern handling characteristics than the original Triumph Trident. Mick Duckworth was the first motorcycling journalist to ride a 1000cc big-bore Harrier back in 1998 and he ‘found the torque of the big engine and the taut roadholding of the chassis [to be] a brilliant combination.’ 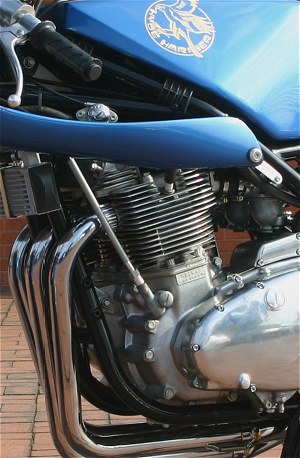 Customers usually provide their own engines, but the Museum was supplied with a complete ready-to-go Harrier, powered by a standard 750cc three-cylinder T160 engine never previously installed in a motorcycle. The three-into-one exhaust system is by Harris. The machine has a Triumph front fork, Ikon rear shocks and Hyde’s latest brakes with fully floating discs.

If you are so smitten by the Harrier that you have to own one, then (if Norman will build another one) you can select your own specification to build a triple best suited for road or track. You will occasionally see a Hyde Harrier being used in competition – with twin Cibie headlights tucked into the sleek fairing they even look like the part for endurance racing. Decent lights come in damn handy on the road, too! 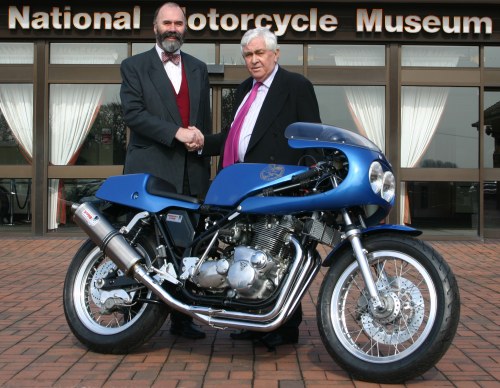 The photo shows Museum owner Roy Richards greeting Norman Hyde as the Harrier changes hands. ‘This beautifully-crafted classic brings together the best of old and new in British motorcycle engineering,’ said Mr Richards. ‘The Hyde Harrier is a highly valued addition to our growing collection.’

If you want to rush off and see the Harrier in the metal, along with all the other bikes at the NMM, then you’ll find them on the M42/A45 junction. The NMM is open every day from 10am to 6pm (except 24-26 December).

If you’d rather find out more in general about the original Triumph and BSA triples, then we recommend the Trident and Rocket 3 Owners’ Club: www.tr3oc.co.uk